In Which My Understanding of Electricity is Challenged

Take a gander at this thing I found in Bulletman #9:

Eleanor B. Roosevelt was on the Editorial Advisory Board of Bulletman?  As was Admiral Byrd?

On the one hand... AWESOME!

On the other hand.... Why isn't this comic a million times better?

I just can't imagine what kind of contributions Eleanor Roosevelt or Admiral Byrd made to this particular publication.  I mean, were they so bored in the early 1940's that they had nothing better to do at the time?  I'm pretty sure there might have been a couple of things going on in the world theater that would have merited a looksee before deciding whether or not Bulletman should fight the Dude again.

The other guys I can see having some time on their hands, but seriously.... Eleanor Roosevelt and Admiral Byrd? 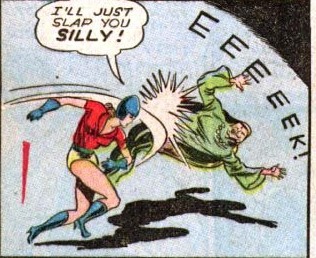 We give Bulletgirl a lot of grief, but we also tip our collective hat to anyone who knows how to properly administer a Random Slap! (tm!)

Here's some fun from Jimmy Olsen #81, courtesy of Robert Gillis! 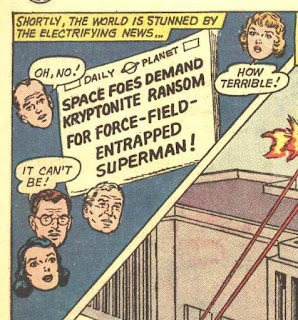 You know things are extra serious when a newspaper is surrounded by Disembodied Floating Heads! (tm!)

This can't be right:

Okay, first: Kryptonite radiation is what kills Superman.  A super-abundant amount of harmful radiation will do nothing but kill you.  There's a world of difference between the harmful effects of radiation and getting zapped by electricity.

Speaking of which, is Jimmy even correct about this?

What?  Really?  Can anyone confirm this?  I'm not even sure who would be an authority on such a thing, and now I've got to know!  Is this true at all?

Not science expert, but this sounds wrong. Very wrong. In fact, I might even say SUPER-wrong. I hope no kids tried that at home...

Why no love for the Quintuplet Doctor? When he went into public domain, Grant Morrison would have used him in his Batman run.

What, not twenty years have passed and the Supercharger from Amazing Fantasy #18, Spidey's first superfoe, is already forgotten?

If this link can be believed, then Jimmy may have been thinking about lightning strikes: http://patient.info/doctor/Electrical-Injuries-and-Lightning-Strikes.htm

Apparently, the mortality rate for lightning strikes is 30% because they are direct currents with nearly instantaneous exposure time. So Jimmy was about 70% right about electricity under certain implied conditions, I guess? Superman would have been toast, though.

FWIW, in the letter column of Superman's Pal, Jimmy Olsen #84, a reader writes, "In 'The Ransom of Superman', you state that 'a strong charge of electricity can kill a human being, but a tremendous super-charge will leave his body unharmed'. Your information is wrong. You see, voltage is a measure of electrical pressure and not of current, as most people think. The ampere is the measure of current and it takes as little as .07 of an ampere to kill someone. If conditions were perfect, a person could be electrocuted with a common 1 1/2-volt flashlight battery. A human can take any amount of voltage if the amperage is low enough; but if the amperage is high enough to be deadly, he can be killed no matter what the voltage is--Jeff Pulcini, Monroeville, Pa."