Lots of Catching Up with Silly Hulk Posts

Hey, gang!  Still plowing through a very rough patch.  Ready for 2016 to end.  But I've found a few little tidbits well worth immortalizing from The Incredible Hulk.

First, you may recall that the Hulk killed the Rhino.  But as is often the case in comics, death is rarely fatal: 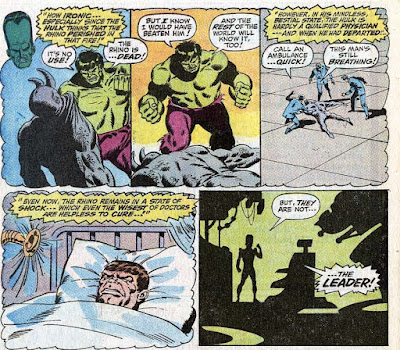 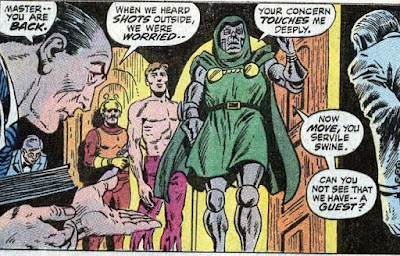 No one puts you in your place like Victor Von Doom.

Here was a plot device I think everyone was happy to see go away, from issue #143:

I don't know who thought that was a good idea or what sort of plot twists it would lead to, but I think we can all agree it's best to forget about the time that Doc Samson's strength was literally related to the length of his hair.

Hey!  Here's something I haven't had a chance to say in years! 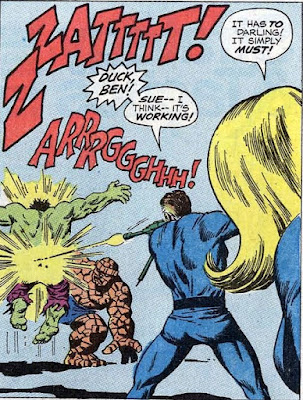 And finally, some awesomeness from issue #194, where the Hulk fights the Locust.

You don't remember the Locust?  Fought the original X-Men.  Not kiddin'.

Anyway, the Locust should appear a lot more often so we can get scenes like these: 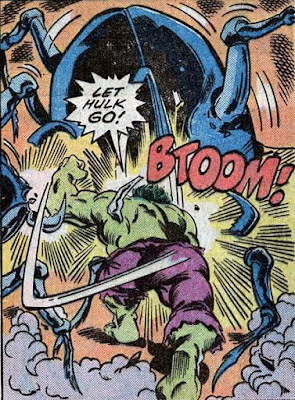 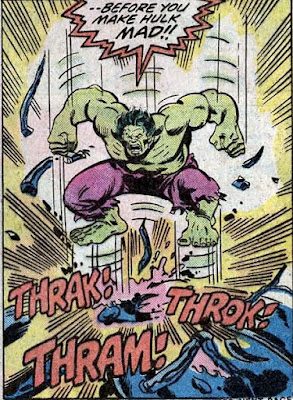 And the piece de resistance:

Hopefully I'll be able to resume regular posts soon, Dear Ones.  Wake me when 2016 is over.

Dear Ones, as I've been alluding to, the Barnetts are going through a heck of a year.  I may be out of pocket for some time as we deal with a medical situation.  I'm sure I will return at some point, but I have no clue when.  Please check back every so often.

But before I shuffle off stage right, let's catch up on the Hulk.

First, there was the Glob: 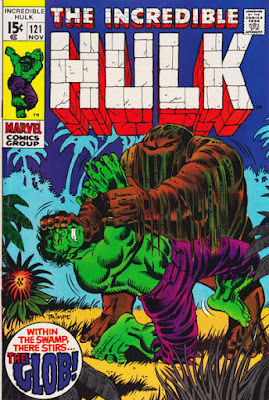 I know what you're thinking, and both the Man-Thing and the Swamp Thing were two years away.  Since he looks like a mashup between the two characters, one wonders if he wasn't an inspiration for them.

But he wasn't that great.  Here we see his origin: 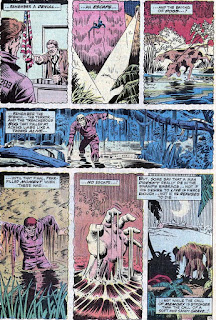 In other words, he was Flint "Sandman" Marko who hid in a swamp instead of a pile of sand.  NEXT!

The next issue was a big improvement, because it had the Hulk fighting the Fantastic Four.  Well, it was more like he swatted Reed, Sue and Johnny like gnats while having to exert some effort in dealing with Ben. 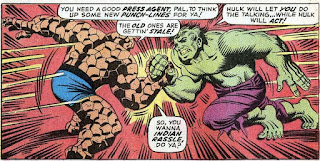 And I believe it resolved a long ongoing debate among Marvel fans: 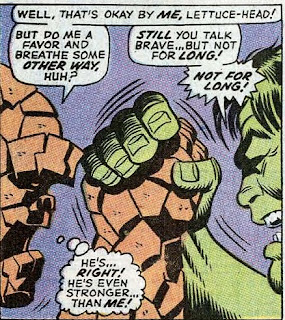 Of course it's common knowledge now that the Hulk is out of Ben's league in the sheer strength department, but there were fans that strongly argued the opposite up to that point.

Anyway, at the next issue we learn that a formula developed by Reed and Bruce Banner gave Hulk the ability toooo: 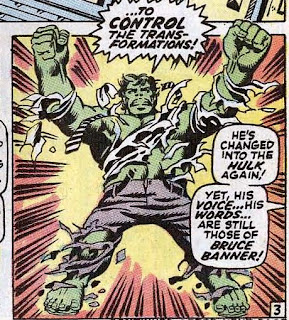 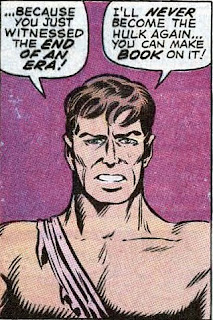 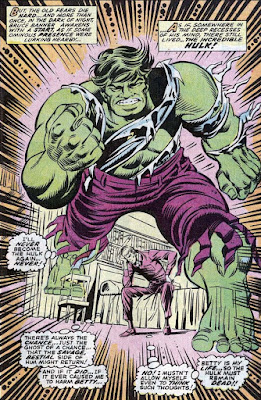 Until the first time someone asks him to do it: 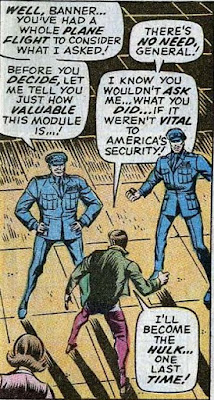 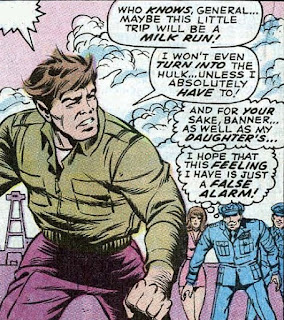 Ooooookay.  Once you start making qualified exceptions to your vow, your vow doesn't mean so much any more.  But okay. 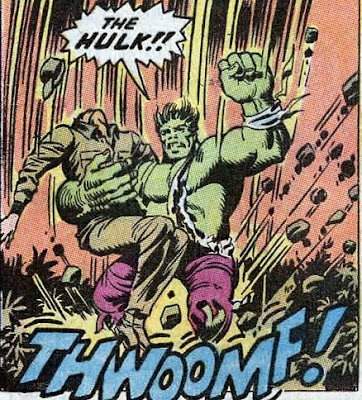 Well, that vow lasted half an issue.

But then we learn that Bruce is not in control so much as he might have thought: 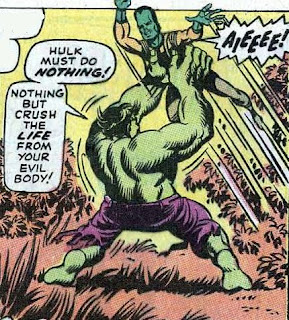 Which causes him to make a vow: 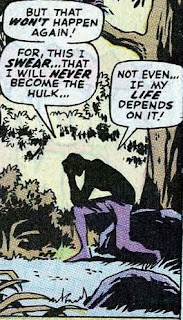 Yeah, when I get back we'll see how long that lasts.

Your good thoughts are appreciated for the Barnetts, my friends!  I'll post when I can!

In Which the Sandman's Personality Shifts Like... I Dunno... Sand?

I skipped a few issues of The Incredible Hulk because if it doesn't involve a super-villain (and I mean a real one, not just some one-shot alien invader), I ain't got time for that.  So you can imagine my delight when I came upon a two-part struggle with the Sandman starting with issue #113.  He's still wearing the outfit the Wizard gave him from his Frightful Four days which also apparently gave him a massive vocabulary boost: 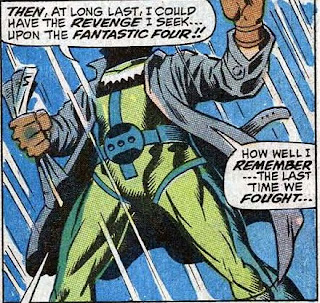 Second, why is he talking like an evil scientist?  He never talks like this.  And it keeps going:

And Sandy's verbal skills have escalated to the point where he is able to manipulate the Hulk by nothing more than fast-talking him:

Granted, it's not the toughest thing in the world to confuse the Hulk, but still.

Anyway, he talks and thinks like Dr. Doom through the whole issue: 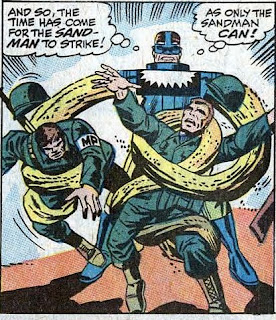 Now we go to part 2 in the next issue: 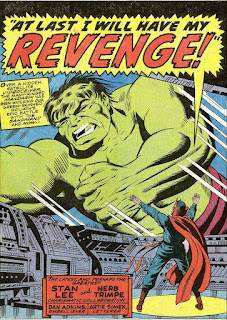 Second: I note that the creative team on this issue is exactly the same as the previous issue.  But notice the drop in proper grammar: 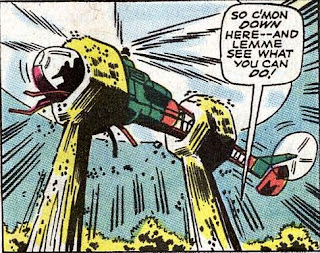 Followed up by some racial name-calling: 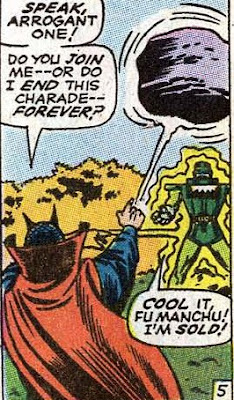 And one more time with the racism because Asians are still fair game in comics during the Silver Age:

Why the sudden personality shift?  I have no idea.  I also noticed that Sandman is wearing the suit that enables him to mix various chemicals with his sand and doesn't use a single one while the Hulk is beating the sand out of Sandman's shorts.  Not a great showing here, but it's better than an alien.

I was wondering how I could "make" every party.... 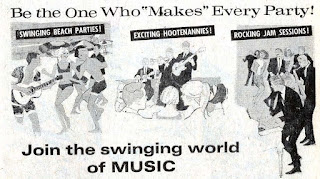 Fun fact:  "Hootenannies" is in the Google dictionary.

In Which the Hulk Actually Kills an Opponent

The Hulk finally took over the Tales to Astonish title in issue 102, making it The Incredible Hulk.  I was okay with this because Silver Age Sub-Mariner just didn't do it for me and the abbreviated space in shoving two stories into a regular-sized comic didn't make for mesmerizing storytelling.

So, I skipped a lot of issues and I regret nothing.  But just to catch up, the secret of the Bruce Banner / Hulk connection was out by then and Bruce had figured out he could change into the Hulk by getting himself excited... something that sounds dirty, but wasn't supposed to be.  Anyway, we're at issue #104 wherein the Hulk tangles with the Rhino and kills him.  Thusly: 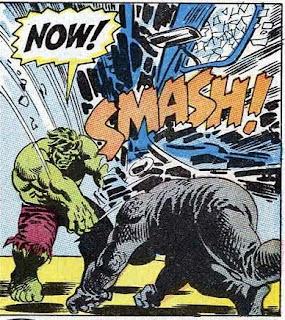 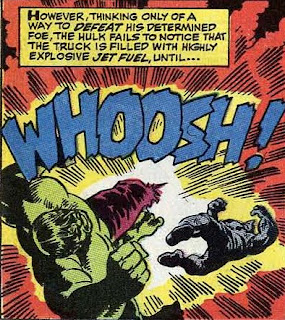 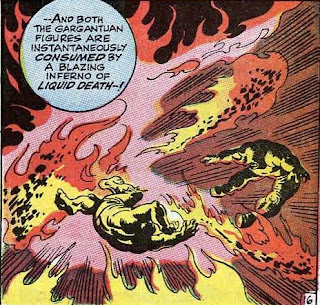 And yes, it's not like the Hulk meant to start the fatal fire.

You knew that song was coming, but at least I gave you something different.

Anyway, Hulk tries to save the Rhino: 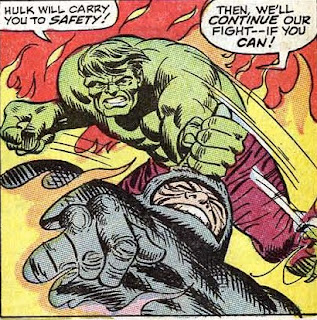 Now, it's important to note that the fire may not have been what the Hulk was going for, it was still the direct result of the Hulk's actions.  And he meant to inflict damage.  The fact that he was more effective than he thought he would be really isn't much of a mitigating factor. 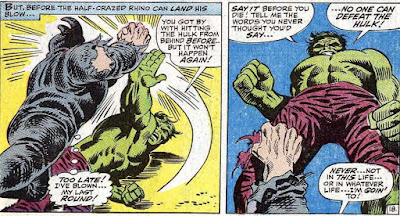 Before you say, "Yeah, but he didn't intend to kill the Rhino," I'm going to cut you off there.  It's not the intent to kill the Rhino that is at issue.  The Hulk intentionally committed the act that brought about the Rhino's death and even someone with diminished mental capacity like the Hulk could have arguably foreseen that smashing a vehicle would cause the gas inside to explode.  Not that I wouldn't have raised that defense if I were defending him, but this is different from your typical "the bullet bounced off the hero's chest and struck the villain" or "the villain gets knocked off the cliff in combat" scenario.

In retrospect, the powers that be probably saw this as a bit problematic from a morality perspective (the Hulk was supposed to be sort of a hero, after all) and changed "death" to "coma" several issues later.  But still.