Let's round out the week with a looky-loo at  Bulletman #12!

We have the return of the Crackpot, who builds robots and whatnot!  Thusly: 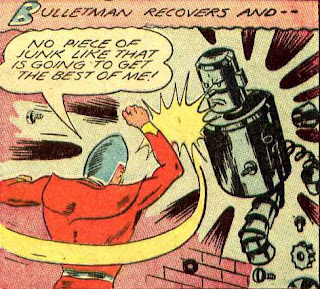 Okay, so we see that Bulletman can punch a robot with his bare hand hard enough to shatter it.  Got that?  Remember that, because I'm going to bring it up again later. 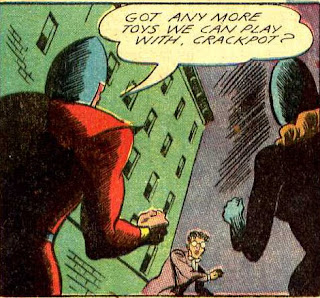 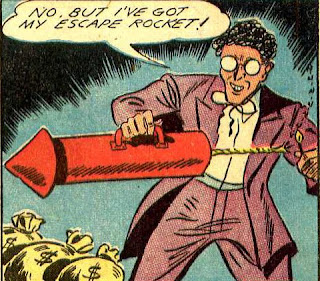 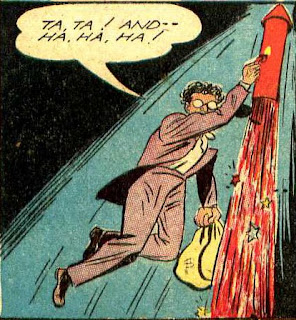 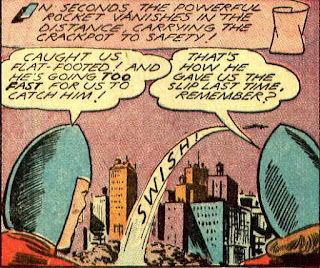 This was the exact way the Crackpot escaped in their first meeting.  It just seems to me that if the Bullets were going to be prepared for anything the Crackpot might throw at them, they would have been ready for that.  Especially when you consider that this is how they took a loss the first time.

But you have to give it to the Crackpot.  He addresses a problem directly: 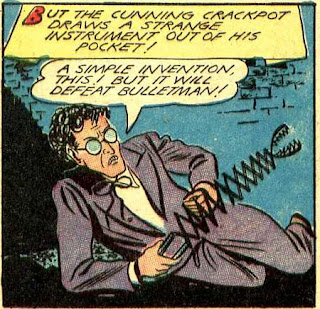 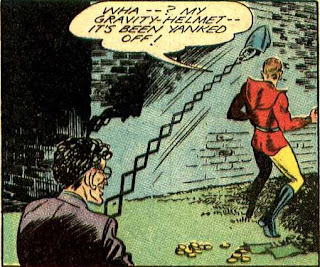 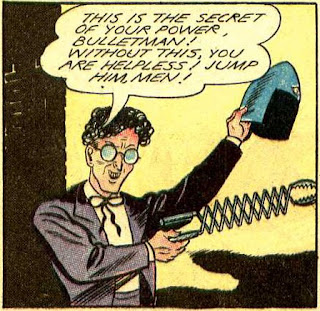 Okay, first: The Crackpot gets it done.  We have mad respect for him here at CMNS.

But second: I thought the helmet only enabled him to fly?  But they're acting like he was Samson right after a visit to a barber.  Check it: 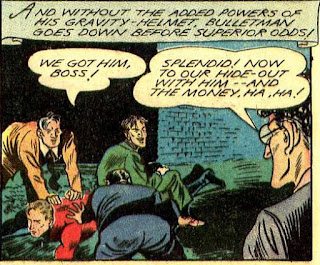 So, how does a guy who can smash robots with his fists goes down because a couple of low-rent thugs jump on him?  If he got any powers beyond flight, Bulletgirl would be super-strong, invulnerable, etc as well.

And Bulletgirl is not particularly powerful.  She folds like a card table any time anyone takes a swing at her. 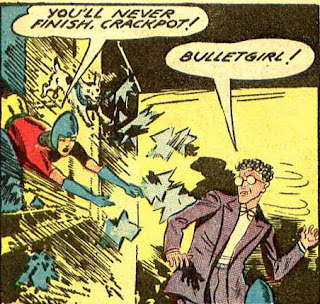 Well, anyone except (oddly enough) Crackpot: 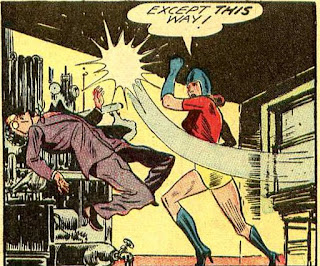 Anyway, then I saw this: 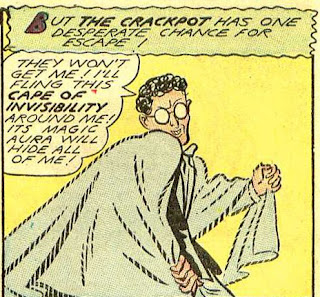 Second, did Harry Potter totally rip this "cape of invisibility" off?

But the power can't come from the helmet, unless Bulletman deliberately gave Bulletgirl an inferior model.  Because, her lucky shot on Crackpot notwithstanding, Bulletgirl loses direct conflicts constantly: 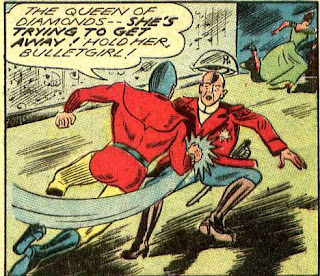 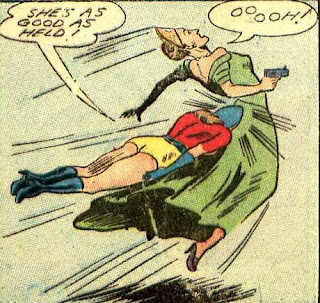 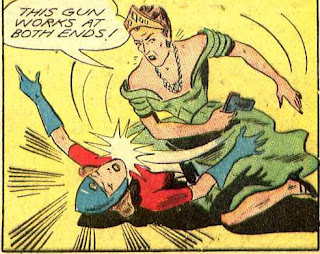 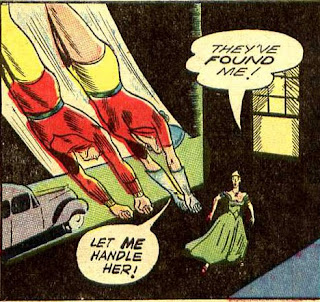 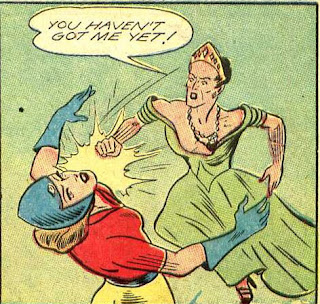 And just to be clear: That was indeed a middle-aged woman beating Bulletgirl up twice. 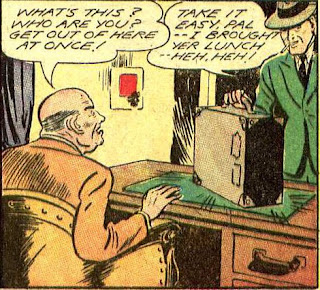 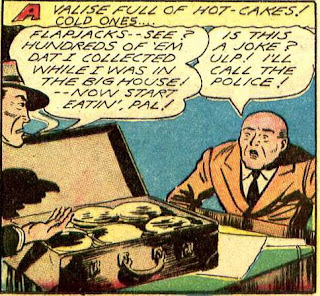 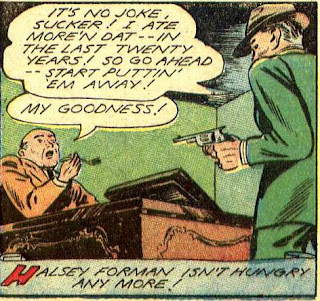 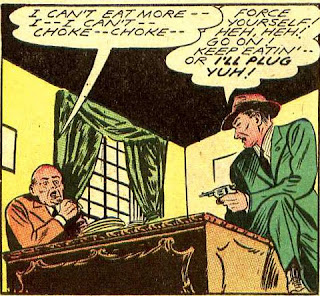 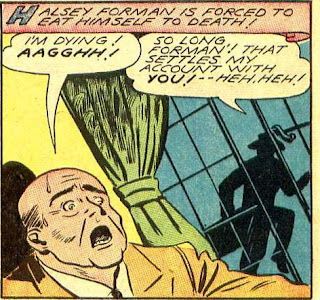 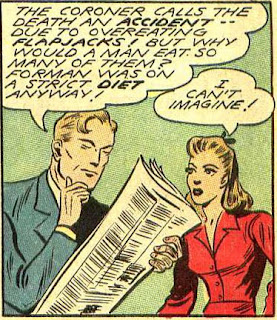 I'm not sure who the coroner was, but he's terrible at his job.

Speaking of being terrible at your job: 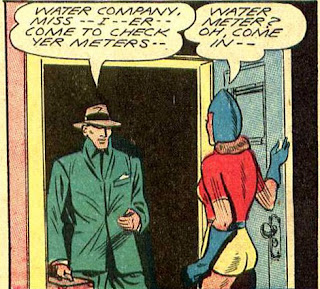 Now does that guy look like any meter reader or utility company employee you've ever seen in your life? 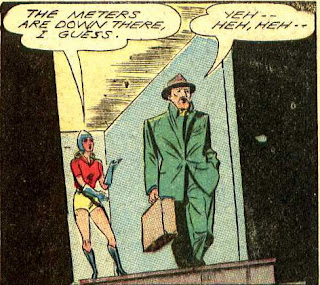 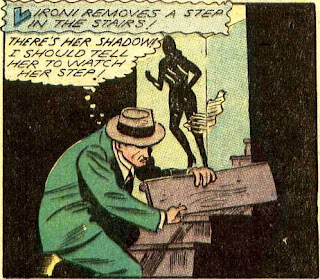 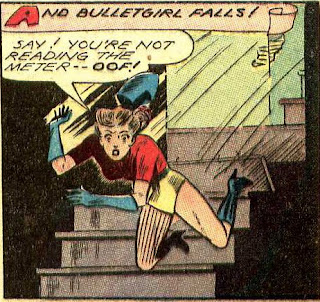 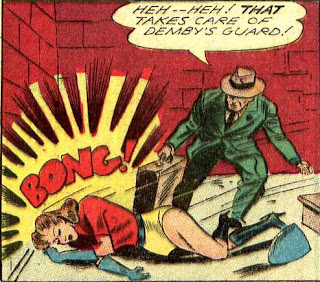 Wow.  She is blindingly incompetent at everything she does.  She really is. 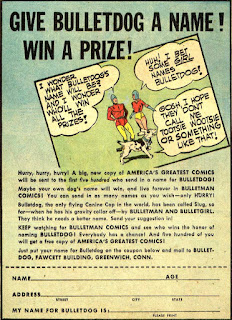 Apparently, they were calling Bulletdog "Slug" when he wasn't Bulletdog.  I'm not sure why they didn't just call him, "Bulletdog" because it's not like he wasn't instantly recognizable when he wasn't wearing his collar.

Although I will say this: Naming dogs is difficult.  By the time I get to know the dog's personality, I've already had to call it something, so I'm rarely satisfied with the names I give dogs.

"Capes of invisibility" weren't Harry Potter's appanage only: British mythology from King Arthur's era mentions the story of Jack, the Giant Killer wearing one in order to accomplish his trade.

That's right! I had forgotten about that!

BONG? Her helmet was already off. And how come none of the bad guys ever stole the darn helmets?

HA! You're right! Why DID it make a ringing noise when her head hit the wall.

In one of the issues, someone (I've already forgotten who) was trying to replicate the helmet after he capture Bulletman. That should have been a regular occurrence in that series if the bad guys had any sense.