Captain Triumph was rarely an interesting read, largely because he didn't have any interesting foes. But then came Crack Comics #61: 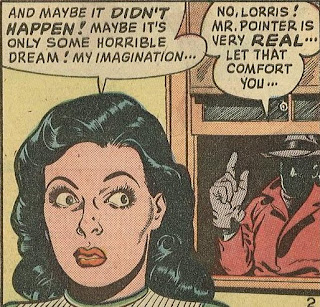 Mr. Pointer was all kinds of awesome. Why? Because as we've discussed before, it's hilarious when a villain puts the hurt on you by pointing his finger: 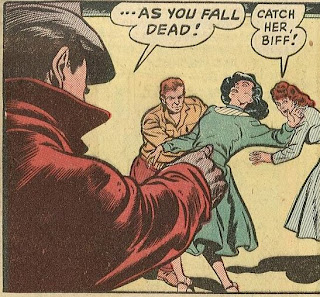 Yes, Biff. It's very important that you catch the dead person before they bump their head on the ground or something.

The act of killing someone by pointing at them was never actually called "Giving them the finger," but you know it came up during an editorial meeting and was quite a riot. I still assert that whenever someone's power is based on pointing a finger, it should be the middle finger. Can you just imagine how hilarious that would be? I know you're using your own middle finger as a gun right now and giggling. Don't pretend you aren't. 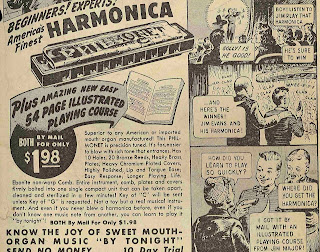 "Learn the joy of sweet mouth-organ music by tonight!" Oh, my. Oh, my my my.

See you tomorrow!
Posted by Adam Barnett at 12:54 AM

i found your blog the other day and am really enjoying it! it's great stuff!

Great new simile you've happened upon. "As convenient as a hobo's mouth organ".

I'll be using it.

You know, I wasn't using my middle finger as a gun and giggling until you mentioned it.

Hmnn. A big announcement, huh? I sincerely hope that it is you getting your own summer replacement sitcom. Wouldn't it be cool to have Red Bee as your neighbor? That's the pitch I'd have given NBC.