That is One Large Infant Wednesday!

I know what you're thinking: Adam, you've been doing your little Comic Book Funhouse and Edutainment Extravaganza for all these years, yet you never mentioned the Spinner? 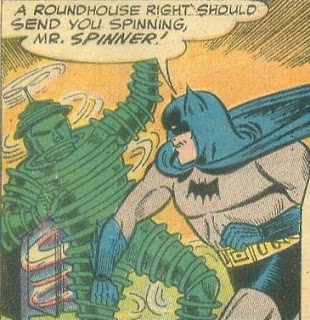 With the Spinner, we see the problem with being a theme villain: You're basically limited to crimes where you can plug in your M.O., which can be dang limiting. Such is the case with the Spinner, who was confined to things like fan factories.

If I ever get to write a story for DC, I'm totally bringing back the Spinner. Just you watch.

Batman: Terror of the Underworld: 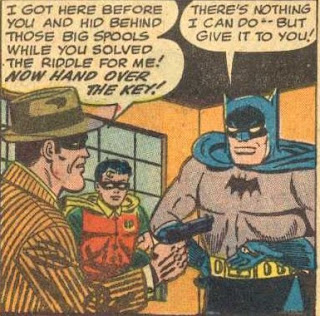 ... unless, apparently, you're one lone punk with a pistol. Seriously, these days, Bats would disarm the guy in a way that would leave him disfigured for life, disassemble the firearm into two pieces, shove one half down the guy's throat, the other up the guy's rectum, reassemble the firearm somewhere in the guy's small intestine, and "accidentally" discharge it two or three times. No wonder sales dipped in the 1950's.

Well, that and this: 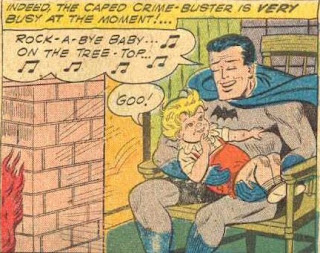 Okay, I'm just going to go lay down and try to forget I ever saw that.

See you tomorrow!
Posted by Adam Barnett at 12:26 AM

Seriously, the kid was just trying to warn him of something.

"GOO! There's GOO coming down from the ceiling, Bats!"

Are you telling me that "There's nothing I can do -- But give it to you!" wasn't a clever segue into Batman slamming his fist in that palooka's jaw? Because that is exactly what I would have expected to see in the very next panel.

Robin: Better let him have it, Batman!

Batman: Do I really have to let him have it?