Your Morse Code is Riveting Wednesday!

Was it just me, or did Robert Downey Jr. mumble a lot in Sherlock Holmes? Because I couldn't understand a word he said, and normally I'm a big fan. It's a shame, because it was a very pretty movie, even if I couldn't tell what he said.

I'm not sure I would hire this guy to be my henchman. On the one hand, he's so tough that he can speak articulately and in complete sentences, even while getting punched in the face: 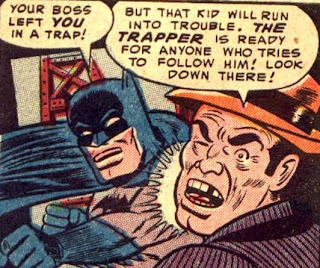 but then he just doesn't shut up: 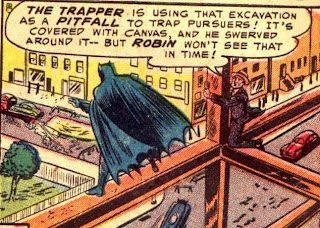 This is a good lesson as to keeping your lackeys on a "need to know" basis. 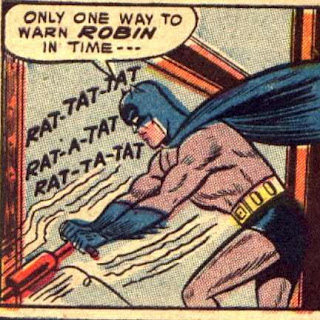 .... and seriously? Batman needs to invest in some walkie-talkies. If your life is hinging on your ability to distinguish Morse Code out of traffic repair noises, you really aren't as equipped as you should probably be. 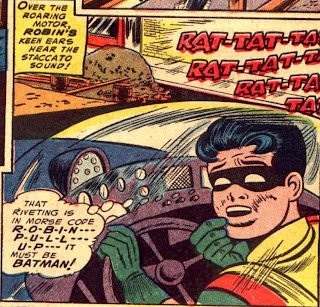 This raises an interesting technical question: Do you fire away with a few "rat-a-tat's" that say "Hey! Pay attention! I'm using Morse Code!" or do you just launch straight in with the message? Because I don't see how Robin didn't miss the first few letters. There's also the question of timing - unless Robin was traveling with the speed of a Segway, it seems like either there would be no time to complete the message, or it would be a completely indistinguishable series of noises. It would be more like "Hey, that's Morse Code! R-O-B-I-N-P-U... AIEEEEEEEEE!"

I'm over-thinking it, aren't I? I probably am. 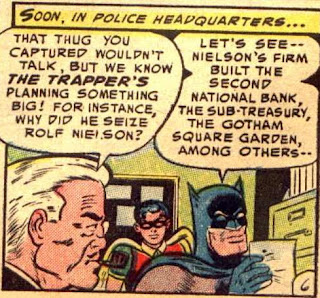 The thug wouldn't talk? I respect you, Commissioner, but it's time to review the Gotham City Police Department Interrogation Techniques, because we couldn't get him to shut up just a few minutes ago.

See you tomorrow!
Posted by Adam Barnett at 12:25 AM

I get the feeling that the thug is one of those people who also had the skill to speak perfectly even with a gun in their mouth... which I've seen in some other comics too. :p

Nice examples of the relativity of comics time. Although each panel represents only one moment, that moment can be stretched by gravity—the gravity of what the panel has to show for the story to keep moving.

Many of my American friends didn't understand Sherlock Holmes either. Must be the Britishism?

It could be, Johnny. I tried to watch the Brit version of "The Office" and didn't enjoy it for the same reason. I love the American version and presume the Brit version is brilliant, but I just can't make out what anyone is saying. Also, I'm from the Plains region of the U.S., so it could very well be that my ears just aren't able to filter the accent. I had the same problem once talking to an Australian fellow on the phone!