Lame to the Last Drop Tuesday!

Most fanboys know that Showcase v1 brought about the onset of revised versions of many Golden Age characters who had disappeared after World War II when they re-tooled the Flash.

Like Watchmen, I appreciate this because it brought new life to the ailing super-hero genre of comics. But that doesn't mean I enjoy these particular stories. So, if you're waiting for me to start doing the Silver Age Flash stories, it isn't happening. I checked out the Showcase Presents The Flash from my library, and couldn't finish it. Egad, Barry Allen is dull. The best thing that happened to the Flash character was when they killed off Barry and gave the mantle to Wally West.

Here's a reason why I just don't cotton to the Barry Allen years. Let's start off with Iris West: Emasculating Shrew, courtesy of Showcase v1 #14:

For my single and newly-married guy readers, let me give you a tip about relationships: If your significant other greets you with a bunch of grief, it's a toxic relationship and you need to cut your losses. If she or he follows up by unfavorably comparing you to other men, you are in a downright abusive relationship. Don't be like Barry.

Barry also freaks out when things are spilled: 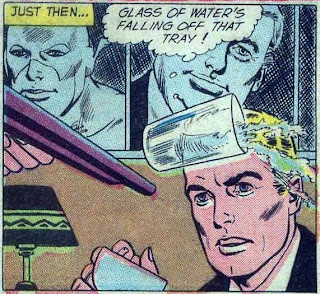 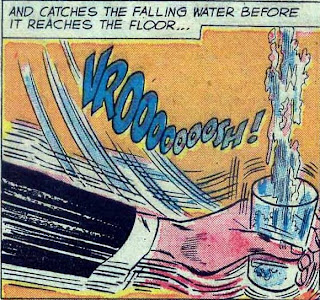 Dude, it's water. It's not acid dripping onto someone's face. They'll get it with a rag or maybe even a mop, but those aren't consequences worth endangering your secret identity over.

All I can tell you is that Barry liked to frequent eating establishments with terribly clumsy servers, because it happened in his first appearance as well in Showcase v1, #4: 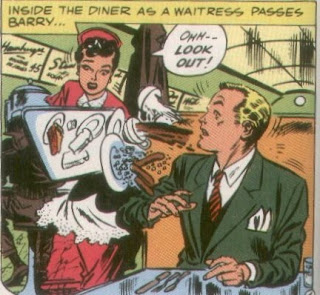 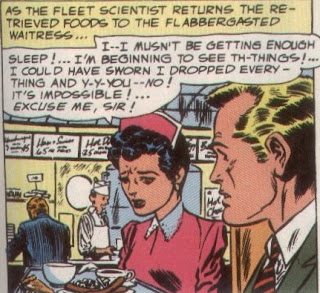 See you tomorrow!
Posted by Adam Barnett at 12:50 AM

I'd like to say that Barry Allen appears mesmerized by those sausages hanging in front of his face. But in fact it looks like it's the French Fries that hooked him.

Did Spider-Man ever do this "cafeteria tray catch" routine in the comics? Or was that just something they threw into the film, 'cause he has the proportionate speed of a spider?

Hey, he probably just saved that poor lady's job! The broken crockery would have come out of her pathetic tips!

You know, I have a mad posh to turn that image of Barry staring transfixed at those wieners and fries into my Messenger ID. In fact, I think I will!

Iris was way, waaaay, WAY outta Barry Allen's league. I don't think anybody BUT Barry shed a tear when the Reverse Flash croaked her. I think Ray Palmer's wife was overheard to grumble, "serves her right!"

It's not the clumsiness of the waitresses that attracts Barry to those eateries. Those women are hotter than Iris, and definitely nicer.

If I were Barry, I'd probably hang out at places with clumsy waitresses too. Catching spilled food is probably one of the only things that makes him feel important.