You Earthlings Can Breathe Sand, Can't You? Wednesday!

As comic nerdlingers, we've seen the old "trap the hero in the bottom of the hourglass so that he only has a limited amount of time before he's buried in sand" riff. We've also seen super-heroes fight a lot of alien creatures because that's a reliable "go to" move when one has writer's block. Here, courtesy of Showcase v1 #14, we see both: 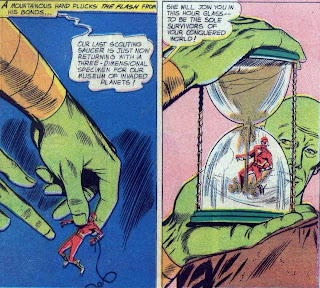 What made this one stand out is that the aliens are saying this is some sort of suitable habitat. I don't think the Flash or Iris are going to be "survivors" of our planet for very long if you're going to be treating them that way. It's the same reason you don't let a kid have a hamster.

And, of course, we can't go five minutes without Iris being the Worst Girlfriend Ever:

Seriously, Iris? Trash-talking about your boyfriend to another guy? That is seriously not cool. No wonder Barry is always catching food in mid-air: He's trying to impress a waitress so he can dump your unfaithful, ungrateful self.

Was I the only one who applauded when they killed Iris off? I wasn't, was I?

See you tomorrow!
Posted by Adam Barnett at 12:15 AM

I'm surprised they didn't just put them in a huge bottle of water and say, "Well, you can live in here. I mean, 75% of your planet is covered in this, so I'm sure you'll do just fine."

the other woman who could compete for the worst superhero's girlfriend ever would be golden-age Shiera Sunders. She was basically the girlfriend of Hawkman, and she was always doing the most dumb-ass things for attention. In fact she was so desperate for attention from anybody that it was downright pitiful.

she also had a tendency to talk and act like a six-year-old girl with ADD. "Oh boy, this is way more fun than an AIRPLANE RIDE! ooh, what's that over there??"

a pity at that, since she was probably the prettiest out of all the golden age girlfriends.

Oh, come on. When it comes to bad girlfriends nobody beats the progenitor of them all: Lois Lane.

Nah, Lois Lane is perfectly fine as a woman, and especially as an lady reporter.
Her only fault was that she was so obsessed with the ideal of being with Superman that she wasn't able to see him as a "real person" in the sense that he wasn't as perfect as she thought he was.
Kinda like having this thing for the ideal firefighter, to the point of romanticizing them in your head... then after years of trying to land a firefighter you finally marry one only to find out that they DON'T wear the helmet when at home, and is basically like every other man out there in that they sometimes forget to put down the toilet seat,and belch a lot when they drink beer.
she put on blinders when it came to that ideal, and as an result wasn't able to see that "Superman" was right there in front of her wearing a suit and glasses all along despite the fact that he was still seriously built.
But when superman wasn't on her mind, she was a perfectly sane woman who simply liked to live life on the edge.