I Will Accept Your Faulty Science if It Means I Get to Wear Tights Like Yours Thursday!

Since we touched upon the first appearances of the Silver Age Flash in Showcase v1, it only makes sense to look at the Silver Age debut of Green Lantern, another reboot of a popular Golden Age hero.

I'm not going to bore anyone with the details, but the Golden Age Green Lantern had a weakness to wood, which made some sense. After all, wood is an organic substance of unique chemical composition.

But along comes the Silver Age..... 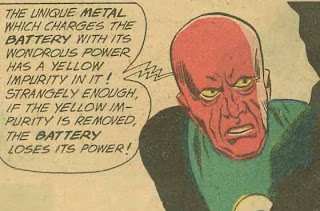 Because, you see, things that are yellow have their own unique chemical composition which renders the ring ineffective?

Wait, what? Because they don't. This makes absolutely no sense. But Hal Jordan knows a cool thing when he sees one, so he's prepared to buy into any nonsense Abin Sur tells him: 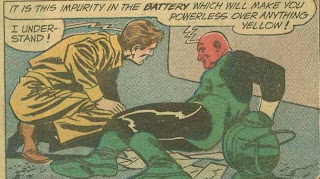 Considering he's about to be handed an alien weapon, I really don't blame Hal for not calling shenanigans on this, but even my seven year-old, below-average scientifically inclined brain knew that this wasn't passing the smell test. But this huge, illogical plot device not only presented problems for Hal almost every issue, but it continues to this day.

And since yellow is a primary color, wouldn't the presence of it in colors like green and brown make it ineffective against those items as well? Oh, of course not, because of the other colors mixed in with the yellow. Those molecules are affected by the ring because they're made up of a different chemical composition. Except they aren't.

Yes, geeks, I know that there have been several attempts to reconcile this, but an ineffectiveness to something based on nothing more than its color is.... well, it isn't racist like it sounds, but it's certainly stupid.

Know what else caused problems for Hal? He, like the Silver Age Flash, seemed to require a certain amount of Vitamin Bitch in his diet: 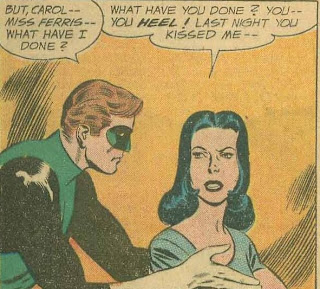 And no, Green Lantern probably shouldn't say his secret identity out loud, especially when he's standing right by a doorway like that, because you know Carol was listening to see how he was reacting to her emasculating ways.

I have always enjoyed Green Lantern and the Flash as a core part of the Justice League, but I've always found their individual titles rather dry. I have no explanation for this, other than the fact that I can't eat cheese straight either. It has to be part of a dish or a sandwich. And it really should be melted. I guess that really isn't relevant, but it makes more sense than saying I can't affect cheese because it's yellow.

See you tomorrow!
Posted by Adam Barnett at 12:16 AM

"...but it makes more sense than saying I can't affect cheese because it's yellow."

What about blue cheese (which is actually white)? ;-)

The whole "yellow" thing is more about the color spectrum than molecules.
Certain wavelengths are harmful! Example: Ultraviolet light (in large doses) is the harmful factor to human skin in sunlight.

In the case of Green Lantern's weakness, I guess Julie Schwartz and John Broome came up with something a little more visually distinctive (and slightly less embarrassing) than wood. (The Golden Age GL could be trapped in a prison made of toothpicks for goshsakes!)

Frankly, Hal was so hot to get that ring, that he was barely listening to Abin Sur. He COULD have told him that it worked on everything but cheese, and Hal would have fallen for it.

Also, I'm pretty sure that Carol knew perfectly well that Hal was Green Lantern, and was simply getting a small modicum of enjoyment out of torturing him, the way that he got a kick out of torturing her. They were MADE for each other!

Hal (and the rest of the Lanterns in the galaxy) also believe that willpower is an emotion. So basically, they're pretty dumb.

The other stupid thing about the origin and the color yellow is that Abin Sur summoned Hal to his side with the ring...while Hal was wearing a bright yellow jumpsuit!

"The other stupid thing about the origin and the color yellow is that Abin Sur summoned Hal to his side with the ring...while Hal was wearing a bright yellow jumpsuit!"

Not quite.
The ring's beam grabbed the non-yellow trainer device Hal was sitting in and transported it (with Hal inside) to Abin Sur.
Hal (as GL) has done similar things against yellow-clad foes numerous times.