We can pretty much give up any hope that I'll ever get tired of Madam Fatal. From Crack Comics #3!

So you may be wondering why no one ever saw through the ruse and realized that Madam Fatal was really a young guy cross-dressing as an elderly lady. I think it's because he had the old lady thing down pat. F'rinstance:

Old people don't take any crap. They'd just as soon whap you upside the head as look at you.

And never wear the same outfit as an old lady, unless that outfit includes head protection:

Old people love themselves some drapes. The mustier the better, old folks love drapes almost as much as cafeterias and coming to an unnecessary complete stop before making a right turn of any kind:

And old people know how to disarm an armed gunman. They just don't get a chance to show it off as often as they'd like: 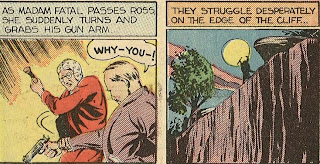 But as is always the case, there was a slight flaw in Madam Fatal's act that would give him away to an observant evildoer:

Did you catch it? That's right - old people don't like movies, especially exciting ones. They like reruns of Gunsmoke if they're old men, and soap operas if they're women (which they like to call their "stories.").

And I hate it when they turn and give a sly look to the reader. There's no way the other people aren't noticing that. Then again, they might think it's just a weird old person thing, like humming loudly in public.

See you tomorrow!
Posted by Adam Barnett at 12:55 AM

Wow, my grandma is one of those who watches soap operas and calls them "stories." I wonder where that comes from?

you know, this is making me want to buy some Madam fatal comics and read them. :P

Madam Fatal is showing a very immodest bit of leg in that second picture.

Try hearing her voice as like that of Mary Backstayge.