I've been married a long time, almost 20 years now. I think what encourages Beloved to stick around despite my many shortcomings is that I have no interest in sports of any kind. It has no bearing on my existence as to how well Randy Roidrage and the rest of the overpaid Birmingham Buttslappers play their games on a weekly basis.

So you can imagine how excited I was to find a complete set of Superpro: 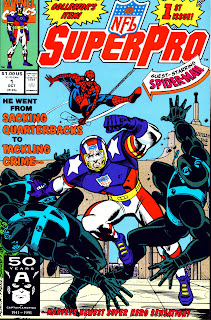 Nothing says "We're desperate for you to buy this" like putting Spider-Man in the opening story. For a character with such little potential, I think they would have needed Spider-Man, the X-Men, the Avengers, and three different versions of Wolverine for this to generate any serious interest.

Although this guy had the right idea: 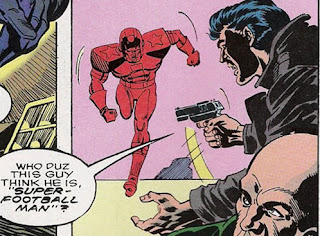 "Super-Football Man" isn't a dumber name than "Superpro." In fact, it's much more expository. "Superpro" could mean a pro at anything.

Superpro apparently has the skills of everyone who plays football. I guess. I really didn't pay that much attention. But he's place-kicking someone here: 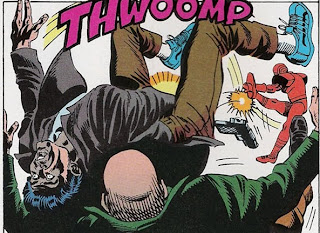 And he speaks in football jargon: 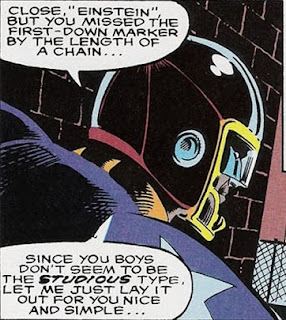 And I don't know if this is called anything other than "tackling," but he's doing it here: 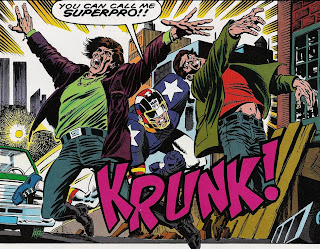 And here, he's speaking in football jargon and dropping names to show you he's really cool and we should like him because he likes Spider-Man and Daredevil and we do as well so we should all buy this book, shouldn't we?: 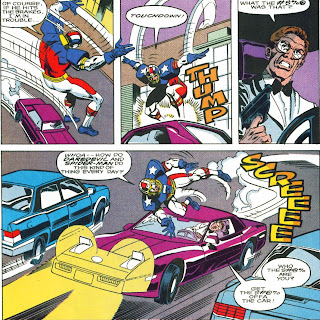 And finally, an endorsement from Spider-Man himself: 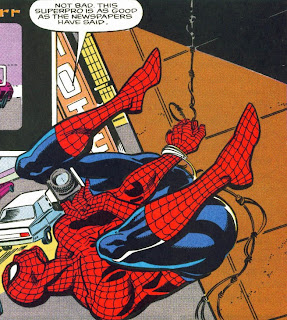 Wow, these are terrible. I don't know if I'm going to be able to go through them all, but I'm going to try. See you tomorrow!
Posted by Adam Barnett at 12:24 AM

Yay for Superpro! I actually have the first issue, and I was proud to have it. This is especially odd since I live in the Philippines and don't know from football...

'Set of Superpro?' How many issues did it last?

"Not bad. This Superpro is as good as the newspapers have said."

I don't think I've ever seen a line of comics dialogue that read so flatly??

How many? I'm counting 12 issues, plus a special edition that "re-presented the awesome origin issue," which wasn't the first issue. I'm not sure where that came from. Maybe BrittReid knows?

Sorry. Avoided this one like the plague when it came out! ;-)

This makes my soul feel queasy.

Jeez, I just skimmed this post. Thin gruel to work from.

Superpro: the original King of Krunk.

It appears that Bow Tie Villain, who can't complete a sentence without an obscenity, said "ufkc" at least once.

Wait, so was SuperPro partially owned by the NFL? If Marvel wanted to use him now, could they?

Please review these. Please. This is just absurd.

What happens when he goes to Europe? "I'm sorry, I only have the powers of American football."