The Martyrdom of Captain Triumph Monday! 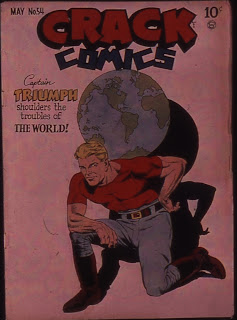 Get it? Because Co-Dependents take on everyone's responsibilities and then get really resentful about it? Eh? Eh?

Screw you. I thought it was funny.

I don't know who it was that decided one should fly in a horizontal position, but this is clearly why that rule was made; 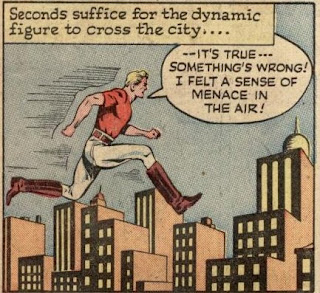 If I could fly, I might actually find that less disorienting than trying to lay on my stomach, but once I saw how silly it looked, I'd probably change my mind.

I'm through plowing through Crack Comics, thank goodness. It had a hilarious name, but most of the stories were neither good enough to read on their own, nor bad enough to give me tons of fodder for the blog, so I doubt I'll pick them up again. Although I will miss you most of all, Madam Fatal.

One last thing: Is it just me, or did Captain Triumph look a lot like Iron Monroe? 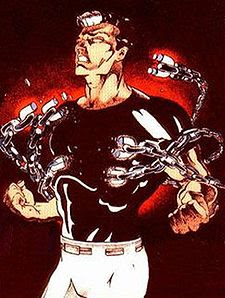 Although I'm glad he didn't. Iron Monroe was badass, at least he was in Young All-Stars. Perhaps Captain Triumph could have been given a boost had he also been revived, but I kind of doubt it. The whole "merging with your dead brother when you rub your birthmark" thing is just a little much for me. I still think everyone missed a bet by not bringing back Madam Fatal.

See you tomorrow!
Posted by Adam Barnett at 12:14 AM

As to the "silly" flying pose, most early superheroes (including Superman) didn't actually fly, but leaped from place to place.
(Superman didn't actually "fly" until the Fleischer Brothers cartoons, where the animators also realized how silly the leaping pose looked.)

Exactly, Britt, but the original Iron Munro had no connection to Gladiator (in fact, the book itself would have made Iron Munro's connection impossible). So my question is, why not just use Captain Triumph is Thomas intended to use him in the first place before Iron Monroe was ever revived?

Don't get me wrong, I'm glad he did, but it's a curious decision on Thomas' part. Maybe he realized between All-Star Squadron and Young All-Stars that Captain Triumph wasn't such a great character. IMHO, Iron Monroe was far and away the best of the Young All-Stars.

I think since the editorial decision was to replace the Golden Age Superman, Roy decided to pay tribute to the "inspirations" that led Jerry & Joe to create the Man of Steel in a new character that would replace Kal-L in the now-single Earth DC Universe.
Trying to shoehorn Captain Triumph with his mystic-based backstory and different powers into the existing continuity might also have been, quite frankly, too much of a hassle.
And you'll note the other surrogates/replacments (Batman=Flying Fox and Wonder Woman=Fury) were also new characters.