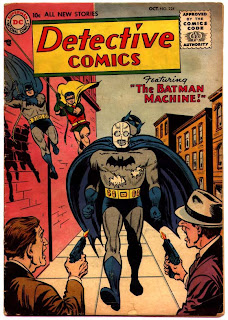 I'm the first to say that most criminals aren't MENSA members, but check out the conclusion this guy draws: 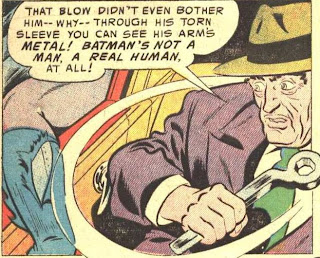 Now, if I was fighting a guy and his clothing tore and some metal was exposed, I would think he was wearing some kind of body armor, which was actually the case here. Not this guy.... no, a much more plausible explanation is that Batman must be a robot!

You can see where this is going.

So, we have an advantage over criminals that they mistakenly believe I'm a robot, so I'm going to exploit this by making their mistaken impression true?

And when the heck did Batman and Robin learn how to build a working robot? It bothered me when Superboy did it, and it still bothers me now. 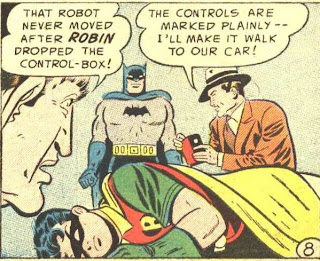 So, they not only built a robot, but they built one that can easily be controlled with a palm-sized device (in the 1950's, mind you, when the computer you're reading this on would take up an entire room). Mind you, this thing runs and punches and fights and everything, but the controls are simple enough that these goofs are able to pick it up and use it immediately. So, I guess your fancy Wii controller can just suck eggs, that's what!

The good thing about seeing Batman and Robin put something in the trophy case is that the odds are pretty good we won't be seeing it again: 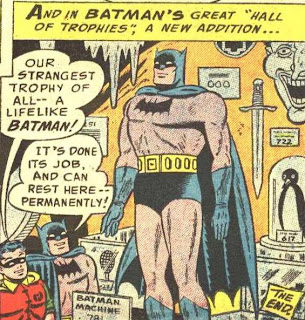 Of course, I'm sure the Gotham City Bomb Squad or Fire Department would love to borrow a simple-to-control robot that can physically perform the same task as a human being, but then we would have an empty spot in our trophy case, wouldn't we?

Yikes. We'll start again on Monday!
Posted by Adam Barnett at 12:08 AM

So in 1939 there was Bozo: The Iron Man, then in 1955 Batman was Iron Man almost a full decade before Iron Man even existed. Now THAT is interesting.