Lois in Outer Space, Proof that the French Don't Like the French Language Either and Poop-Flinging Monkeys Thursday!

I'm no astrophysicist but....

.... shouldn't Lois's head be exploding in the cold reaches of space? I mean, presuming she didn't burst into flames when she was taken out of the atmosphere? It just seems like a short-sleeved dress wouldn't cut it.

I took French in high school and college, but I speak it about as well as these guys: 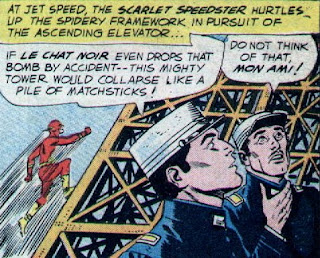 The problem is, these guys are supposed to be French. Zut, alors! The French, it is too difficult to speak correctly when you air undair such menace!

This is one of the most awesome panels ever: 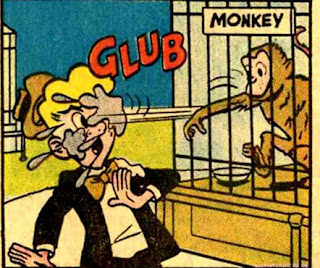 I know people will argue with me that the monkey isn't flinging his own poop, but it's much more enjoyable if you assume that he is. Monkeys flinging poop... that's entertainment right there!

Here's an interesting item for comic book nerds with much more discretionary income than I:

"Bryan Singer, the genius behind the X-Men series, is donating a very exclusive opportunity to the highest bidder: a set visit to the next installment of the highly anticipated X-Men film, as Mr. Singer’s personal guest! The visit will take place in the United Kingdom this coming Fall.

"This once-in-a-lifetime experience will also give the winner a chance to meet some of the actors who may be on set that day. For a full description of this item, visit here. Bidding ends June 24, 2010.

Proceeds, according to the press release, are to benefit Project Angelfood. "Project Angel Food’s mission is to nourish the body and spirit of men, women and children affected by HIV/AIDS, cancer, and other life-threatening illnesses. For more information about the organization, visit here."

It sounds like a very worthwhile cause, and what a nifty prize! We're talking about X-Men: First Class behind-the-scenage here, so if the travel expenses aren't an issue, dig deep and bring me along as your guest!

See you tomorrow!
Posted by Adam Barnett at 12:40 AM

Actually her blood would "boil" and she would freeze.

i just wanna know what kind of 'payback' lois thinks superman is expecting...!

Of course Lois is wearing short sleeves, its Summer on Mars.

"Wh-what's that helmet for, Superman?"

Could be the basis for a retcon in which Lois had a previous relationship with an industrial headgear fetishist...