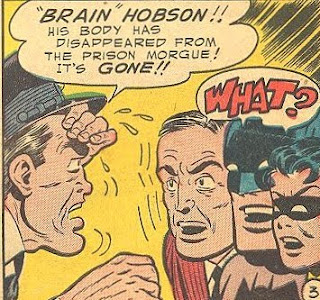 Why is everyone standing so close together? It doesn't show it, but I'm pretty certain that they had to have their arms wrapped around each other in an inappropriately intimate way to get that close. And they're yelling in unison, which is always fun.

Guys named "Brain" are generally not a very interesting character, but at least this guy had uniforms: 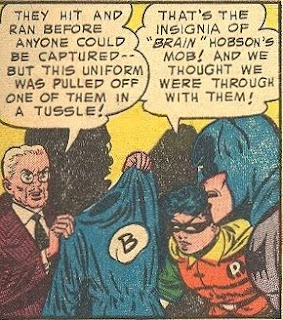 I'm not sure about that insignia. The outline of a brain looks kind of like a butt since he didn't draw in all those little squiggly things. Don't take short cuts, kids! Take some pride in your work, or you'll end up in obscurity like "Brain" Hobson.

And how did someone's jumpsuit get "pulled off" in a tussle? That just doesn't seem possible, unless the K-9 unit was just left to his own devices, in which case I would expect the thing to be shredded and smelling of urine and feces. Something just doesn't add up.

Hey! It's time for Fun with Out of Context Dialogue!(tm!):

See you Monday!
Posted by Adam Barnett at 12:30 AM

If only every Friday were butt-throbbing-tunic-losing-shouting-in-unison-Friday.