I am Future Man in a Relative Sense Depending on Your Perspective Tuesday!

Today is a landmark day in that I've finally finished plowing through the complete All-Winners collection. The biggest challenge, of course, was dividing the funny from the just plain awful. But I did it, by gum!

By the end of the run, Marvel had totally ripped off DC Comics' All-Star Comics Justice Society formula and merged the solo stories with a common enemy. But more on that in a moment. First, we've got to get them all in the same room, which is no easy task because they still apparently had to rely on very public methods of communication: 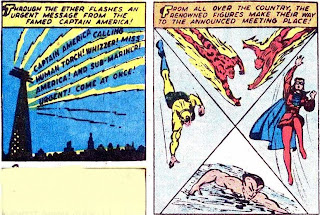 Of course, since Captain America never actually told them where to meet, the remaining members of the team obviously just wandered around, perhaps for days. This was especially true of Miss America, who seems to be going in the opposite direction of everyone else.

The central villain of the issue was (wait for it).... Future Man. I realize it was very difficult to follow up with kicking Hitler's ass all those years, but seriously?

What bothered me the most about "Future Man" (who was indeed from the future), was that he called himself "Future Man". Now, why would he do that? Right now, we're living in the future from the perspective of people who lived in 1946, but to my eyes, I'm living in the present. Wouldn't I call myself "Present Man" if I went to the past?

And the plot was totally goofy. Apparently, the superior intellects of the future thought it would be a whiz-bang idea to kill everyone in the past for some stupid reason that I could easily recall if I were to flip back a few pages (but I'm not gonna). Of course, if you kill everyone in the past, odds are pretty good you are going to bump off a few of your own ancestors, and then you would also cease to exist. Has the Back to the Future Trilogy taught us nothing?

Head seriously hurting. The things I do to entertain you lovely people.

Anyway, here's him dropping a bomb while Cap and Bucky try not to step on people because they're suddenly gigantic. I think that's just for dramatic effect, but I've never followed Cap that closely, so I don't know for sure: 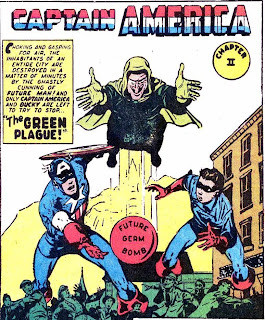 Germ warfare I understand, but why would you label it "Future Germ Bomb"? That doesn't even make sense. Are these germs that will appear in the future? Apparently not, because he manages to wipe out a town with the silly thing before Captain America shows up (and we won't be too hard on Cap because his assignment was to guard Europe. Yes, all of Europe. Just he and Bucky, guarding an entire nation. I wish I were kidding).

But it did uncover a new power of Captain America that readers had never seen before: The ability to detect micro-organisms with his naked eyes: 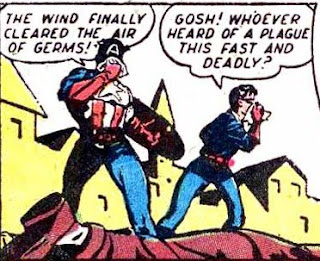 Words cannot express how glad I am this was the last issue. I need something to renew my faith in comics. Cue the Iron Man 2 trailer:

Oh, yeah. That's the stuff. With Mickey Rourke as Whiplash. Not to mention War Machine and the Black Widow. How positively bitchin' is that gonna be?

See you tomorrow!
Posted by Adam Barnett at 4:19 PM

Not to be overly nitpicky or anything, but Europe isn't a country. So, really, it was just Cap and Bucky guarding an entire freakin' continent!

It's a "future germ bomb" because it hopes to someday grow up to be a germ bomb.

In the same sense, I think I'll make up a "Future Man" shirt for my 6-year-old son.

Ha, OTL! I'm such a goof! Blame it on the American Public School System.....

This saddens me. Completely unaware of this in the 90's, teenage me actually created a superhero called "Future Man". (A name chosen to let his opponents know he was a man (punch) from the future. "Future germ bomb", however? Still lame.)

Of course, by the time I was done "tweaking" the character he ended up dropping the name as it no longer worked. Seeing this makes me glad.

This is the reason names like "Modern Art" don't work.