I am positively giddy that there will be a third Chronicles of Narnia movie after all. I love those films.

I just can't seem to rush through Young Allies #1. Let's savor them, shall we?

Note that Toro has only been around about a page and a half by this point, and he's already turning this into a comic book version of Lord of the Flies.

Next up is Knuckles. Just like the obligatory fat guy, every guy gang needs a kid who likes to fight: 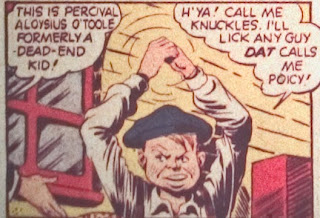 These days, we call that sort of kid an asshat, but apparently it was socially acceptable back then. That kid always went by a nickname like "Scrapper" "Brooklyn" or "Knuckles." Why? Because "Kid with Aggression Disorder" took too long to say.

And, of course, we have to have the team smart guy: 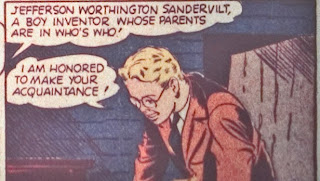 Jumping Jimmy Swaggart on a Pogo Stick, is he bowing? Someone smack him. Knuckles, make yourself useful.

And just in case you thought Whitewash Jones was going to disappoint: 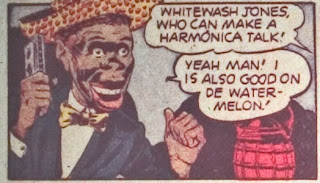 Oh, my. Oh, my my my. The next time I decide people are too uptight about being politically correct, I'm going to remember Whitewash Jones.

And of course, the fat kid: 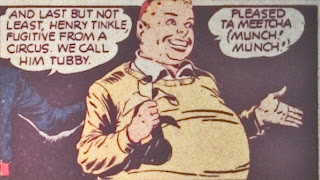 You see, overweight people can't stop eating for five seconds, even during introductions. That's why it's perfectly okay to mistreat them, scorn them, and alienate them in any manner you see fit.

Wow. I can't get over how awesomely terrible this is.

See you tomorrow!
Posted by Adam Barnett at 4:08 PM

"Jefferson Worthington Sandervilt, whose parents are in 'Who's Who - Among Hyperintelligent Unfrozen Cavemen'! He still hasn't learned to walk upright!"

wtf is with that ridiculous pose, Knuckles?

and I think the brainaic is actually leaning on an table, but we can't see the table due to poor paneling layout. :p

If they were only more inclusive then, they could have had a special needs kid, maybe a polio victim, and call him "Gimpy."