I'll Fight Them Off with My Own Non-Existent Mental Bolts Wednesday!

Before I forget, another ice storm is coming this way and there's a possibility that the power will go out. I'm hoping this isn't going to be a nine-day-without-power-in-sub-freezing-temperature mess like we had a couple of years ago, but if there is an unexplained lack of postings, just know that it's because I'm not able to post. If that happens, I'll get things back on track as quickly as possible.

Not everyone agrees with me (ie, people who like being wrong), but I prefer the modern method in comics of not having any (or minimal) dialogue on the cover. To me, there's just something about letting that cover art drop clues about the story and whet your appetite for what is to come. 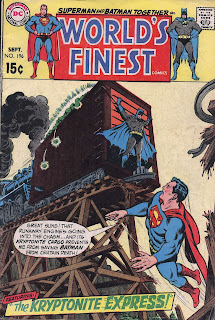 Okay, who is Superman talking to and how quickly would he have to be talking to get all that out before the train crashes? And even at the age of six, I think I could have pieced the situation together without all the narrative.

Now, let's look at it after I poorly yet effectively remove the dialogue: 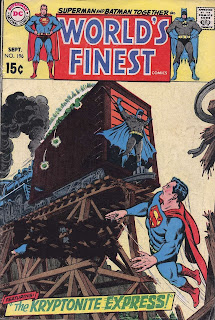 Isn't that better? Granted, the black patch there isn't wonderful, but it's less distracting than all the yackity yack. 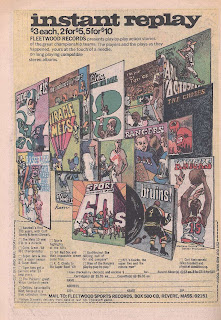 I never cared about sports. Seeing people get all up in arms over a game just slays me, because (a) it will have no real effect on the course of my life and (b) those players and coaches couldn't care less about mytroubles, so why should I care?

But I cannot imagine anyone buying a record so they can listen to someone explaining a sporting event that has already happened. Did anyone buy these? Don't be frightened. If you actually sat down and listened to one of these things, I would love to know how that worked out.

So, we hit World's Finest #200 and they do a mock interview with Batman, Robin and Superman reminiscing. I presume at least one of them isn't wearing pants, because it's funnier that way. Anyway, Batman has just been given the boot from the book, and you can see how well he's taking it: 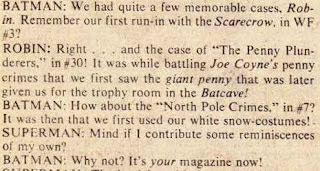 Isn't that hilarious? If you play it in your head with Bruce giving a resentful tone, you can almost hear the "And EFF you!" coming out.

So, this was the official word that the title would become Superman and a random guest. This was an okay idea, and one that would resurface in the 1980's with a title called DC Comics Presents, but taking Batman out of a book to focus more on Superman leads to moments like this: 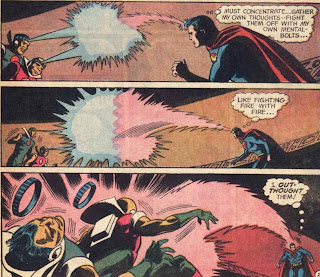 Yeah, because.... you know, Superman has mental powers. Because he says so, and Batman isn't around to correct him.

See you tomorrow, weather permitting!
Posted by Adam Barnett at 10:16 AM

W/o the cover, a complete newbie has no idea what the heck them green glowing rocks are, and why they might keep ol' Man of Steel from just effecting a tidy rescue.

I take Adam's side on this one:

"That runaway engine's" -- yes, we see that it's a train engine and that it must not be looking where it's going (delete!)

"and its kryptonite cargo" -- name of the issue is KRYPTONITE EXPRESS; I think we can figure the rest out (delete!)

"prevents me" -- OK, a newbie might have trouble with this one

"from certain death" -- this is where a newbie is bound to think differently than an experienced Batman reader: he's just a man in a costume vs. he'll pull out the ole bat shackle-cutters and free himself + his suit is armored and his remote-controlled bat plane will drop a Neosporin bomb on him to stop the bleeding. In either case, the statement is either obvious (newbie), or just plain wrong (comic nerd) -- so . . . (delete!).

So, with all this, we're left with the narrative, "Prevents me!" Or we can just delete that too and end up with a picture.

Adam, this wasn't one of the sports albums anyone EVER saw, but I had a 1973 roast of Ron Santo, just before he retired as 3rd baseman on the Cubs.

Regarding the sports re-creation albums: Back then, all those crazy hopped-up kids had to hear was "yours at the touch of a needle" and they were all over it. Damned hippies.

I can accept the idea that there can be too much dialogue in these old covers (as much as I have affection for the cliches & conventions represented), but I think a lot of modern covers go too far in the other direction, especially Marvel's overly-generic "greeting card" covers: "In this issue of Spider-Man: Spider-Man makes an appearance!"

I agree they can take it too far and it seems like they're just putting stock drawings on the cover sometimes... but if given my 'druthers, I'd rather see a cover that can drop hints to the story without spelling out what I'm seeing. I thought this issue was a good example of that.

Oh, I dunno. I kinda miss the old "talking" comics covers. Most of them were laugh-out-loud funny, albeit unintentionally so. I think the last artist I saw use them regularly was Alan Davis -- who made them DELIBERATELY funny. His are some of my favorite covers EVER.

As for sports -- yeah, they're pretty useless in the long run. However, the people involved in them are like anyone else, in that some of them DO care about what happens in other peoples' lives. Quarterback Peyton Manning contributed a lot of money to have a children's hospital built in my neighborhood in Indianapolis -- and the people at that hospital actually saved my daughter's life when she was only 8 months old. So, darned right I'm always going to cheer for Peyton Manning and the Indianapolis Colts!

I want to mention that this blog likely wouldn't exist if these comics weren't, at least to some extent, written by/for people who can't piece together what's happening without having it spelled out for them.

I'm sure it was explained in the story about Superman's vulnerability. I support less dialogue on covers.

Valid point, Allergy (and I deleted the pesky spammer). A HUGE part of material comes from the over-exposition that takes place in comics. It creates a lot of unintentional humor that IS my bread and butter. Or it WOULD be my bread and butter if someone got paid for blogging! :-)

Better men than I have tried, Adam, but you just won't take our money! :-)