Have You Gone Space-Happy? Tuesday!

It's no secret that I'm not a big Superman fan, mostly because I'm not ten years old. But I can sympathize with people who had to actually write his stories, because maneuvering around all those super-powers must have been quite an ordeal. Consider World's Finest #185: 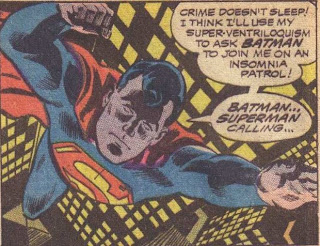 Mind you, it was 1969 and the Justice League was in full swing. I'm pretty sure they had communication devices that were a lot more reliable than "super ventriloquism," whatever that is. And, while I realize Superham is capable of many amazing things, I call "shenanigans" on any power that enables you to just talk to one person out of the billions of people in the world when you have no idea where they are.

The gist of this story is that Batman and Superham are snatched by aliens to compete against each other so the aliens can gamble. This plot device shall henceforth be known as the Aliens Have Too Much Time on Their Hands Plot Device! (tm!)

And no one seems to know what a pinball machine is: 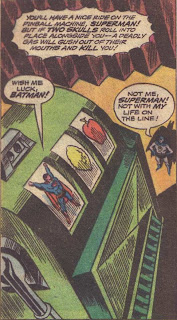 It's been a few years since I've been to Vegas, but that looks like a slot machine to me.

Anyhoo, Superman had been one step ahead of the aliens like he always is, and had communicated that to Batman by sending large amounts of radiation into Bruce's brain: 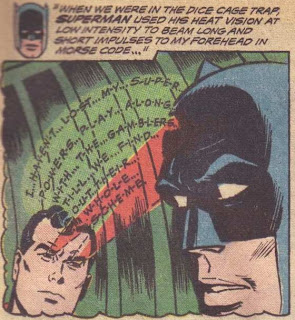 Granted, I'm not the smartest guy in the room, but it seems like now would have been the ideal time to use super ventriloquism (again, whatever that is) and just whisper the plan to Bruce rather than give him a lobotomy or a brain tumor in the process.

And, of course, All Hail Hypno Toad!

I never tire of Hypno Toad.

See you tomorrow!
Posted by Adam Barnett at 10:21 AM

In Japan you can find hybrid slot and pinball machines (technically it's pachinko, but close enough) called "pachislot".

But if the aliens have Superman strapped into one, that means... THE ALIENS MUST REALLY BE THE JAPANESE!! AAAIEEE!!

I still have my superpowers, but let's play along?
WHY?! just frickin bust out and kick some butt!
Idiots!

that got to be the creepiest superman I've ever seen. *first image*.

what the hell were they thinking when they drew him like that? I get that it's night-time, and thus he might be flying in shadows... but seriously did they have to draw him with such a grim expression?? and without irises or pupils?!

The whole effect just makes him look like he's possessed...*shudders*