Nothing Says "Master Criminal" Like an Oversized Camera on Your Head Tuesday!

The more I read old comics, the more I understand what they were talking about in Seduction of the Innocent.

Jungle Batman apparently has the ability to communicate telepathically:

Or maybe Bruce was talking to himself. The jungle does strange things to people.

Remember The Gong? He was Galactus compared to this guy from Batman #81: 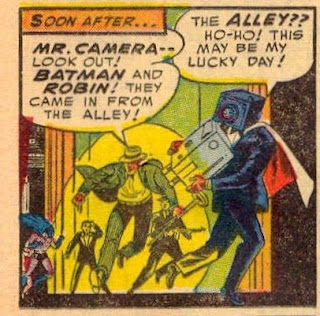 Yup. Mr. Camera. With a big camera on his head. As technology improved, I presume his head likewise got smaller and smaller.

Enough of this. Cue the gigantic harp!:

I tried to play the clarinet as a child. That's why I write a blog about comic books. That's how good I was.

See you tomorrow!
Posted by Adam Barnett at 11:04 AM

"...I presume his head likewise got smaller and smaller."

I seriously lol'd at that line!

I don't know whether to laugh or cry upon seeing Jungle Batman and Robin...

Darn! It's so corny, it's creepy! Jungle Bats and Robin are the unsexiest thing I've ever seen, even if the idea is not that off. Oh, well, lol.

"Yup. Mr. Camera. With a big camera on his head. As technology improved, I presume his head likewise got smaller and smaller."

That made me laugh so loud, I'm sure I disturbed my neighbors with my horse laugh! Love it!

Mr Camera made an appearance on last night's "Brave and the Bold," in the scene where Aggressive Batman goes into a bad guy's bar to bust some heads. There were so many minor villains there I couldn't even begin to name them all. It would interesting to see a who's who for that scene--some delightful obscurity going on there!

I though that this guy kamagra was the one who just draw disgusting stuff hahaha anyway very funny thanks for share it.