So, did you know that there was a comic called Men's Adventures? That alone should be enough to give you your CMNS fix for the day, but there's more! 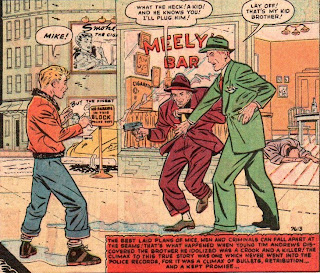 Wow.... be careful if you send Mike a friend request on FaceBook. His buddy there is liable to pop a cap in you. You know Mike? You'll never clutter up his wall with your Farmtown updates! I'll see you dead first!

As you can see in the very lengthy caption, the stories here were supposed to be true. Unless you read down to the bottom of the page:

So, they're true. Unless we have a lawsuit on our hands. In which case we made everything up.

Tim's brother Mike gets mixed up with the mob. But that's only the beginning of Tim's troubles. 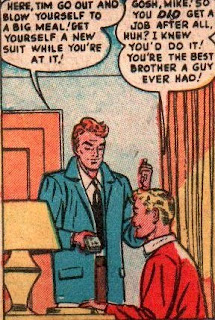 Blow yourself to get a big meal? Now, why would Mike be telling Tim to do that in order to feed and clothe himself? Mike clearly has money. That's just mean, making Tim put on those kind of antics just to get Mike to provide the basic necessities. Although I do think I've just found my favorite panel ever, so there's always that.

These girls today. So forward. Not demure, coy and self-respecting, like they were in our grandparents' day: 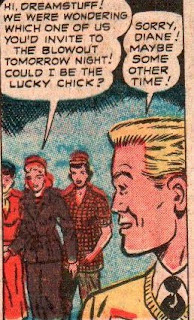 Believe it or not, everyone is still clothed in the next panel.

Although that girl on the right had better be a lumberjack, or she has made a very serious fashion mistake.

Yes, there's more! There will always be more, my lovelies!

See you tomorrow!
Posted by Adam Barnett at 3:02 PM

Well no wonder mister Crazy McMobster's so darned edgy: from the looks of things, HE KILLED THAT FAT BAR-KEEP!!!!

And anybody who reads this blog and gets that reference is my new best friend forever. :D

Well, my mind is now officially blown, which apparently puts me in the same boat as poor Tim.