Before Shaggy Ever Said "ZOIKS!" Friday!

There will be no posting on Monday in honor of Martin Luthor King Day. I will, however, take a moment to discuss perhaps the most controversial character I've ever unearthed, Whitewash Jones of the Young Allies. Because of the upcoming MLK Day, I thought it appropriate.

As you can see from the snippets I posted, Young Allies is very much a product of its day, and while it was probably a pretty good time in America to be a White Protestant Male, if you were anything but, you were regarded as a second class person. This is even reflected in our beloved comic books, where every woman faints at the first hint of stress and non-whites are physically incapable of speaking proper English. It may have been a Golden Age of Comics, but it certainly wasn't a "golden age" for everyone.

They also tended to overuse the word, "Yahoo!" At least they did in Young Allies: 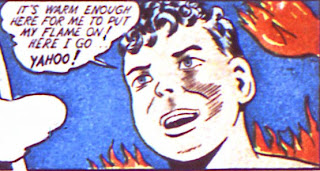 I suppose there are worse battle cries. I mean, "Avengers Assemble" doesn't sound really badass if you think about it. Once they assemble, what are they going to do? Write me an angry letter or circulate a petition?

But back to Whitewash. When I covered the first issue of Young Allies, there were two panels I decided at the last moment not to print. One was the use of a racial slur as if it were acceptable and one where the behavior was demeaning and humiliating. Although I often run poor errors in editorial judgment for no other reason than to show how stupid it ultimately makes the publisher look, there comes a time where to re-run a panel would inadvertently promote the bigotry I'm trying to condemn. 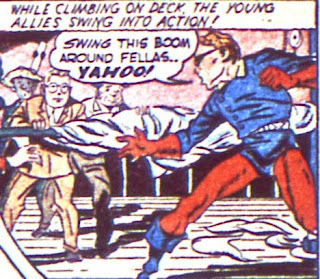 Whitewash is a character that makes us all uncomfortable on first blush, primarily because of his dialect. But in examining the character, I isolated all of the panels where he did anything of note: 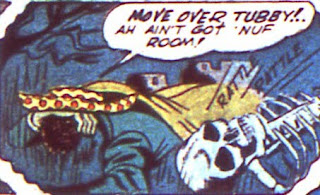 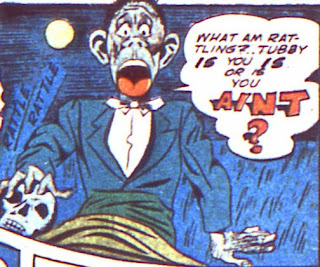 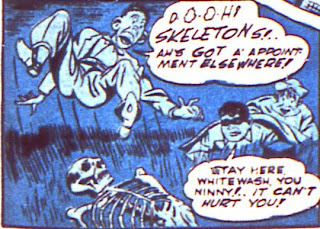 You see what I mean? His poor grammar aside, this is hardly a racial slam. To me, this is just a predecessor of the same kind of thing that happened all the time to Shaggy on Scooby Doo. Only Shaggy was clearly stoned all the time, so he was more a slam on college freshmen than anything else.

And we see here that Whitewash is meant to be the butt of a joke: 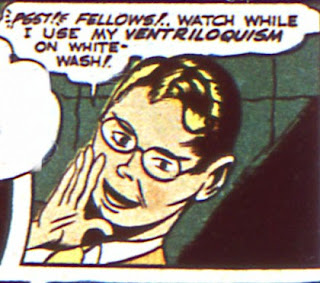 but it's not a mean-spirited joke, and it fails in another Shaggyesque fashion:

If we really look at the character in and of himself: 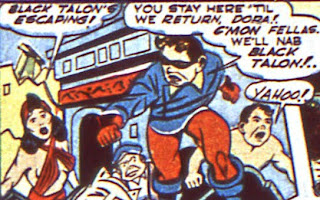 The fact of the matter is that Whitewash, his questionable fashion sense notwithstanding, is one of the more capable members of the team: 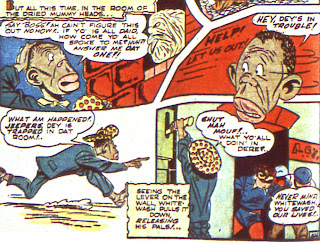 So, perhaps we should ourselves look beyond Whitewash's first impressions: 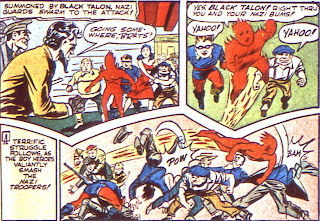 Okay, great. Yahoo! If I say it ten more times, will you leave me out of it for the rest of the day?

Whitewash has a certain nobility to him. Here we see him portrayed in quite a heroic fashion: 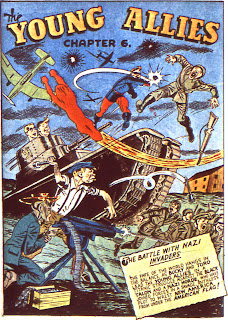 And here we see him coin the term "Octopussy" for the first time in recorded history. 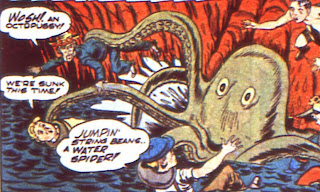 At least he knew what it was. The stupid white kid thought it was an insect.

And that's why I'm inclined to continue featuring Whitewash in the blog, you see

Oh, I'm sorry. I didn't mean to interupt the "Yahooing." Get it out of your systems: 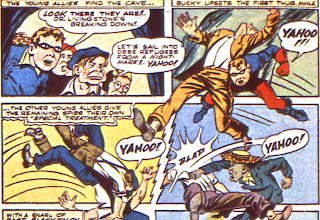 As you can see in the above panel, Whitewash is very much an essential part of the team. No, he isn't the paragon of African American Pride, but he has a certain nobility about him. And, if we're honest, no one really got a pass in Young Allies. Tubby is a compulsively-eating klutz, Knuckles is a hooligan, and Jeff may be smart, but I guarantee you he lived his whole life without ever knowing the touch of a woman. None of these guys were what a girl was hoping to meet on a blind date.

Whitewash may not have used correct grammar, but neither did Knuckles. Probably the biggest issue I personally have with Whitewash is how he is drawn. Then again, I don't like it when Clark Kent is drawn to look like Jerry Lewis: 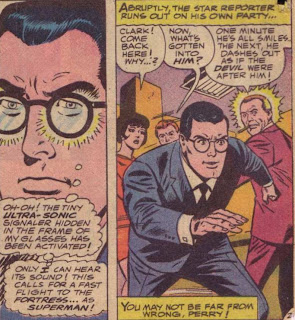 I expect I'll probably continue to show groan-inducing panels of Whitewash, as well as the entire team, whenever they say or do something I think you'll find entertaining. Just please remember the motives of this blog is to show cringe-worthy moments in comics, even (or especially) the ones we'd rather never happened to begin with. 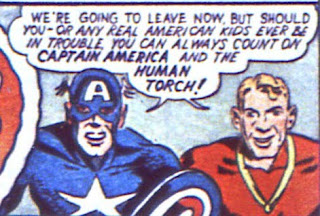 That, my friends, was quite a promise. I have no idea how the publishers expected to deliver on that, but the first time I needed Captain America or the Torch to leap out of the comic book and save me and it didn't happen, I'd be writing an angry letter.

Have a great holiday weekend, everyone! Boys, take us out with a song!: 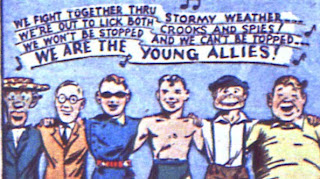 Never gets old, does it?

While I'm aware of a lot of early comics "pickaninny" portraits that don't allow for much heroism, it's heartening that the creators of this comic had their primary concern in letting a bunch of American kids beat up Nazis, and the minstrel-show act comes in second.

It's also nice to know that "Whitewash" actually was more than the token black friend in poorly shown packaging. When people complain about a stereotypical portrayal, I'm reminded that some people actually do act that way. It's more a question about how group X is treated as a whole, or that there is more to the character than a hard accent.

Love the blog... but I have to make one minor nitpick...

Martin "Luthor" King? You've been reading too many Superman comics my friend.

I SEE WHAT YOU DID THERE

"Avengers Assemble" would only be a good battle cry if they were combining robots a la Devastator. Hmm, come to think of it, there is that "Marvel Crossover" line from Transformers...

Captain America is a racist!
What about us real British kids that need help :(

And, let's face it: Knuckles looked like a caveman.

True, but Knuckles wasn't the only white boy, or white character, in the magazine.

In contrast, Whitewash was usually the only black character, and if other black characters appeared they also conformed to the same general stereotype. And that stereotype also appeared in many other parts of the pre-WW2 mass media.

Instead of Shaggy, the best analogy for Whitewash is Scooby Doo: always part of the team, often crucial to the adventure, and never fully human.