She's Being Kidnapped! Quick, Put on Your Roller Skates Thursday!

So I've been doing this blog for a few years now, and you may be wondering how I decide on what material to use. Well, sometimes I hit a gold mine of inspiration and work a few days ahead (or at least I try to if I know I'm in for an extra-busy work day). But usually, I just come up with stuff a day in advance. That's right. I'm all about the danger, baby!

See the method to my madness is that if I have to find something in World's Finest, my current "might have stuff" pile, that's great. But I'm past the truly terrible years and panels that make me cringe become fewer and further between. So, while I'm going through comparatively better issues of World's Finest (which are actually worse for me because they don't have the silliness quotient of their ancestors), I eventually give up and pick an the next issue of Young Allies, which I'm sure will not disappoint.

This is probably more about the process than you wanted to know, but it explains this:

I could have been five years old, and I would have found this image embarrassing. I appreciate that they're all comfortable and confident with themselves, but if anyone ever knew I had such a thing in my possession, I would have died of embarrassment.

Of course, now I'm a grown up and I publish these things to thousands of people, so things change.

Anyhow, after reading many issues of World's Finest without success, I plow into Young Allies #2, where the women-folk are seem to think they can sass you: 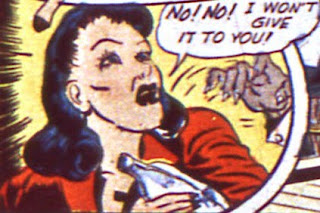 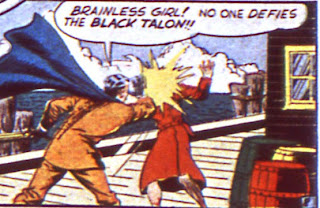 That's right. No one defies the Black Talon. Not without getting a slap.

I'm not sure what to make of the Young Allies, which seemed pretty grim in the first issue. 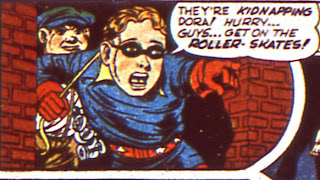 But any team that will put on roller skates and consider that a serious form of transportation kind of grows on me. 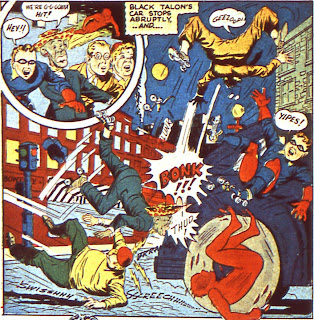 The only conclusion I can draw from this is that really smart people will go sailing off into outer space if disoriented, and overweight people emit lightning bolts from their heads. I'm surprised that's never happened to me, but I generally avoid things like roller skates and amusement parks.

I have no idea what Knuckles is saying here, but it sounds kinda dirty: 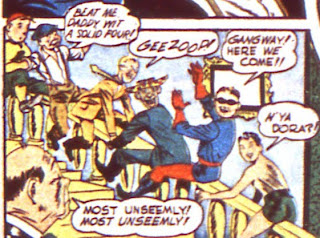 And I'm loving that butler. They should have given him his own series.

And it just isn't a Young Allies story without Whitewash Jones setting the Civil Rights Movement back ten years every time he opens his mouth:

And while I find Whitewash offensive in every way imaginable, at least he doesn't say "Geezoop" all the time like the smart kid seems to. That's right up there with "Sockamagee."

But that's the beauty of Young Allies. It may not be gold, but there's always something to talk about.

See you tomorrow!
Posted by Adam Barnett at 4:41 PM

"Beat me daddy"? Get hip, that's jazz talk. The Andrews Sisters, "Beat Me Daddy, Eight to the Bar"; sounds kind of like "The Boogie-woogie Bugle Boy of Company B".
http://www.youtube.com/watch?v=qZv6hL6aYfQ

Ah yes, and Knuckles with that "solid four" reference? Here are The Andrew Sisters from the Abbott and Costello film, "Buck Privates," with "Bounce Me Brother (With A Solid Four)." Because apparently innuendo didn't exist back then, and it was all about finding a music craze that would replace boogie woogie.

Poor Whitewash...hitting the car with his lips. That ole harmonica playin just ain't gonna be happenin no mo!
..and let me tell you about those roller skates..they clamped to the soles of your shoes and had steel wheels. 'nuff said. been there done that.

Believe it or not, Cormac, I didn't post the Whitewash panels from issue 1 that went way over the line. It's one thing to show how stupid bigots were/are by how they portray other races, but there were some panels that were just SO offensive and such a low point for this hobby we love so much that I would have felt distasteful bringing them back to light. Some might call that censorship, but I prefer to call it good editing judgment.

I'm sorry, but while true ridiculousness might have *technically* become less frequent after the late 60s and 70s, there was still LOTS and LOTS of ridiculousness in comics.

Take, for instance...this. Or the fact that virtually every entry in Andrew Weiss's "Nobody's Favorites series is from the Bronze age or later.

The difference was that around this time comics started taking themselves more seriously. So there was less license to be fun and silly on a regular basis, and you weren't as likely to get "Superman becomes a fish and falls in love with a robot" type stories, but when something ridiculous DID pop up (which still happened a lot) it was way, way, way stupider because it was usually meant to be taken seriously.

True, Prankster, but a daily blog is a trick and a half, and without a system wherein I mix fertile ground with not-so-fertile ground, there could be several days without a post. Which I suppose I could do, but I think most folks like to see something every day, even if I often have to tap into the 1940's. But don't worry.... when I read a run, I read a run as far as I can, so I try not to leave anything untapped!

Hey, if you want to focus on the pre-60s stuff that's cool, I just have issues with people who claim that the comics (especially superhero comics) after that period represent some huge leap in seriousness and importance and quality. I think there's plenty of great stuff in the golden and silver ages, and personally I find most 70s superhero comics to be painfully bad.

Have I mentioned I'm a nerd?

It seems like U.S. 1 didn't have any Whitewash type character.

How's Whitewash playing a harmonica and singing at the same time?

At first I thought "Geezoop!" was the brainy kid in the middle of a gen-yoo-ine swear word right as he... was...

HOLY SMURF! ARE THOSE KIDS BEING RUN OVER BY A CAR?! THIS IS THE BEST COMIC EVER!