Because Nothing Says "I Care" Like Costing Someone a Day of Their Life for No Good Reason Thursday!

In comics, DC Comics in particular, characters love to screw with each other on special occasions. Probably the most oft-targeted victim of this was the late Ralph Dibney, who was often presented with a pre-fab mystery engineered by loyal wife Sue on his birthday. He rarely put the two together, which was unusual for someone who was recognized as an actual detective. I'm pretty sure this had something to do with why they never had children. 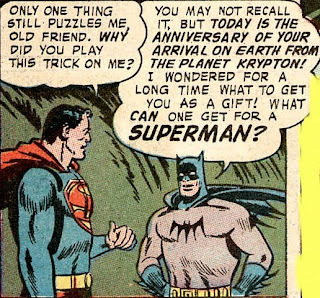 Hmmmmmm.... I would be happy with a nice edible treat. You know, like a nice ham or something.

Too pleasant? It is when the gift-giver is Batman: 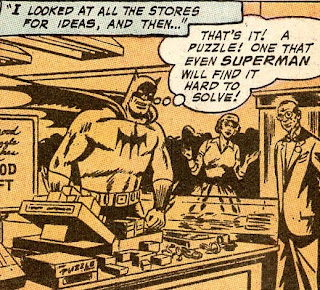 Yeah, rather than give your friend something nice they might actually enjoy, stress them out for a while. Thanks a load, Bruce. Was Hallmark closed or something?

And why is Batman shopping in costume, anyway? That's just asking for an unproductive afternoon.

I guess the relief that comes from realizing you've just been punked is the gift itself: 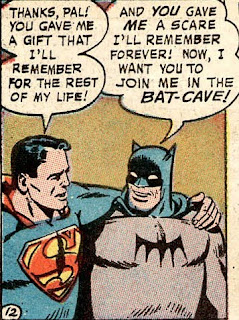 Of course, I'd be "de-friending" Bruce off my social network sites at that point, but Clark has the good sense to realize he's dreadfully dull and probably shouldn't burn any bridges. 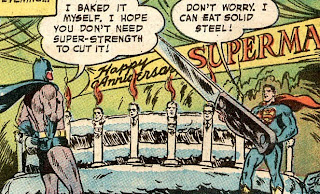 Now, does anyone think for one second that Bruce didn't make Alfred bake the cake and then take all the credit? And why is that cake so freakin' huge? Is there a chick inside? Is it Lois? Because I'm not sticking around if it's Lois.

Anyway. Don't set me up for stressful experiences as a way of celebrating special occasions. It won't end with a cake, I'll tell you that right now.

See you tomorrow!
Posted by Adam Barnett at 4:48 PM

So, is it a superhero thing to put burning wax heads on the top of the candles on their cakes? Creepy!
Yeah, I was wondering about the shopping in costume thing too. It's not like someone's gonna realize that you're not only Bruce but Batman by the gift you buy. Or, that you have to be in costume to buy another superhero a gift.

that cake would definitely belong on
http://cakewrecks.blogspot.com/ :p
Because as Ross said, those candles are just way too creepy!

Anyway, those clerks now have a story to tell. "So there I was, minding my business when Batman actually comes up to me and asks me what I think would actually be a good gift for superman. I wasn't sure if I wanted to point out that he was actually in the ladies' section. you know, perfume and inmate wear. Or maybe he knew? But that kind of brings up all kind of disturbing questions... oh wait, Superman wears red underwear outside his blue tights. never mind."

Batman must've been eating his mistakes with that cake. That would explain the 250 or so extra pounds he seems to be packing!

There was a story where Batman just gives him money.

In the story, Batman really screws with Superman, sneaking into the fortress, leaving signs that say "Kent is Superman" and stuff like that! And I always wondered about the cake at the end -- hell, a wedding cake feeds 200 people but this cake looks like -- eh, it was the 60s :)