Must My Amusement Always be Spoiled Tuesday!

One last look at Young Allies #1, one of the worst, most offensive things I have ever read. And yes, I have the entire run, so buckle up.

Tubby gets a pass from me on this one. Us fat guys have to stick together: 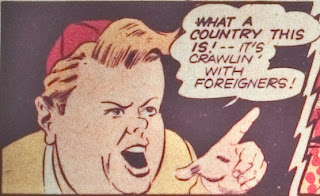 And then things get really bizarre. F'rinstance: 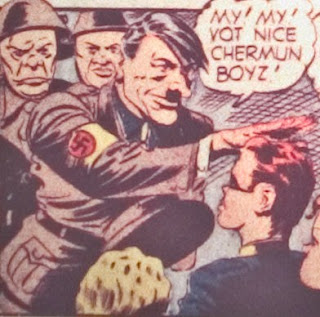 Adolph Hitler himself doesn't recognize Bucky. Mind you, Bucky is Captain America's partner. You'd think that if Hitler were to recognize anyone on sight, it would be a masked kid wearing an American-colored costume. 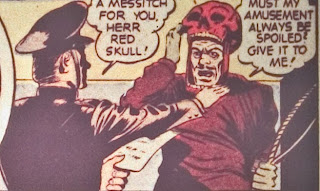 I'm not positive this is the only time the real face of the Red Skull is ever seen, but it's the only time I've ever seen it, and I'm an old person with far too much time on my hands.

Okay, that was only entertaining to my fellow comic geek readers, but it was worth noting.

Before you look at the next panel, remember that Toro is the only member of the bunch with any actual super-powers. Okay, got it? Here we go: 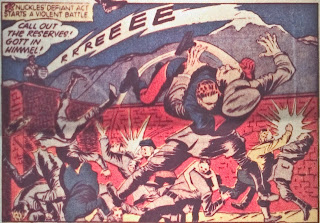 Toro seems to have forgotten that whole "turn myself into a flaming human in order to save me and my friends from danger" thing. Instead, he's right there below Bucky, trying to wrestle a trained, armed Nazi soldier. Frankly, I'm amazed this team survived to the next issue.

But survive they did, even Whitewash (who would live to offend African Americans for untold generations to come doing things I won't even put on the blog). But only because the adults came to save their hides, which is the most realistic thing I saw: 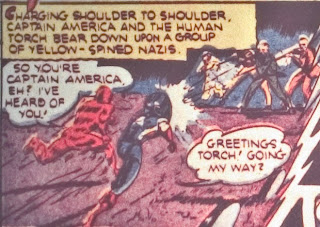 So, this is where Cap met the Torch for the first time. That's kind of a historic moment in comic book history, which actually makes it rather cool. Not cool enough to make this thing were reading or owning, but still an unexpected bit of noteworthiness.

And you even get to see them in action together. Sort of: 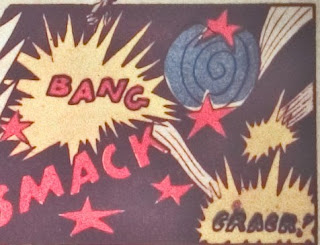 That was rather anti-climactic, even by Golden Age standards. Ah, well.

See you tomorrow!
Posted by Adam Barnett at 11:26 AM

I can't help but wonder if Tubby is actually Rush Limbaugh as a child.

I had to sit here staring at the computer for like ten minutes before I figured out what "Chermun" meant. Oy.

I think you may be on to something, SallyP. Look at that first panel: a little photoshopping and we're in some creepy territory here.

Did the Red Skull actually even have a "real" face? There's yet another disappointing retcon.

LissBirds: in comic books and movies, people in other countries don't speak their native language, even to each other. They speak English with the accent of whatever country they're in. Trying to render that in eye dialect can lead to confusion, however...

When I first saw that last panel, I honestly thought the bottom right sound effect said "GRABB!" and I was about to get really excited - but, alas, no.

Pretty nice blog you've got here. Thanx for it. I like such themes and anything that is connected to this matter. I definitely want to read a bit more soon.

Hello friend amazing and very interesting blog about Must My Amusement Always be Spoiled Tuesday!

Your article is written very content, All of the projects look great! you make it look so simple to make this purse that I'll have to try it myself! Thanks!