You'd think that after doing a blog about bad comics for over three years, I would have developed a thick skin to just how bad comics can be. Then, I stumble upon Young Allies.

Before there was the Teen Titans or Young Justice, there were the Young Allies. Not that a group of reg'lar young fellers and a superhero pal or two was a completely new concept (the Newsboy Legion springs to mind), but the Young Allies separated themselves from the pack by being perhaps the most terrible comic I have ever seen.

Have you ever seen a trailer for an upcoming movie and felt like they gave too much away? Check out the Table of Contents: 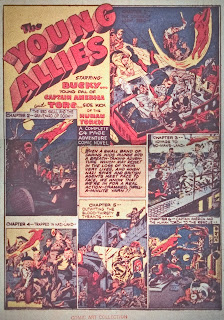 You would rightly assume after reading this page that they've pretty much told you the whole story. You would be correct. I guess the concept of "spoiler alert" was still years away.

But I suppose the joy is in the journey. Case in point: 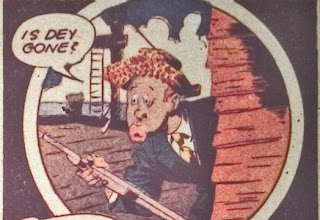 I wrestled with whether I should give Whitewash Jones any attention at all because of the stereotypical aspects. But all I have to do is watch some dating show on VH1 and I can't imagine anything Whitewash says or does as being much worse.

And, of course, we have the obligatory fat kid. Fat kids are always named "Tubby" or "Tiny" because as we all know, that is very witty and hilarious. And the kids never seem to mind. I was the fat kid in grade school, and it didn't set too well with me to hear these clever remarks. But according to Young Allies,

overweight people always carry food around (which is certainly true for me - I have some barbecued spare ribs and a side of slaw in my pants pocket even as we speak) and it's always okay to assault an overweight person as long as you are mocking them for their weight. 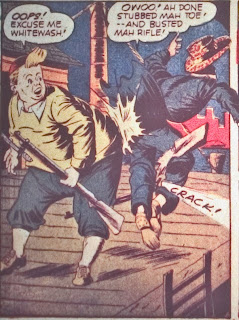 So, when you go to sleep tonight and dream of the weekend ahead, remember that we are only 8 pages into the first issue of Young Allies. Pleasant dreams, my pets!

See you Monday!
Posted by Adam Barnett at 9:20 AM

Oh, wow. You're RIGHT. And here I thought early Teen Titans was bad!

Is that table of contents showing Bucky totally machine gunning down a dude?
Maybe winter soldier wasn't that much of a retcon

"Nazi-Land" sounds like a name for the most ill-conceived theme park in history.

Hmm... I smell a spin-off of "The Producers" in there somewhere.

I suppose it was "progressive" to let a black kid have a firearm at all, if you think about it.

Check out Tubby's bayonet, though. Talk about comics as a bad influence on kids. "Hey, Mom. Can I have a B-B gun so I can be like my heroes in the comics?" "Uhm...welll...I suppose so." "Cool. And I'll need a bayonet."