We Must Stop the Speedy Guy! Monday!

Super-speed is probably the third most-used power, right behind flight and super-strength. I have nothing to back this up, really, but I'll bet I'm right.

The problem with being a super-fast guy is that everyone wants to slow you down. Like thus: 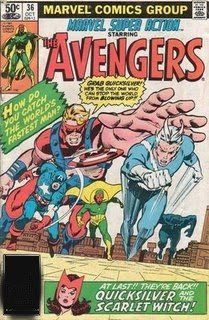 Or even thusly, going as far back as WWII: 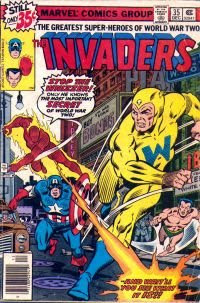 There are all kinds of logistical problems with being a speedster. The most obvious one is how friction keeps from burning your clothes clean off. I suppose Marvel can blame "unstable molecules," which they also use to explain how other character's clothes stretch, shrink, expand, turn invisible, or don't burn even though the wearer is consumed by self-generated flames.

Only problem is: (1) Reed Richards supposedly invented the "unstable molecules," which means that any Golden Age hero should have been running around naked half the time (which would have been perfectly fine in the case of the Phantom Lady, but you see where I'm coming from) and (2) it really doesn't help non-Marvel characters. Sure, Superman has an indestructible costume from Krypton and I suppose your magic types have got things well in hand, but what about the Golden Age Flash, Johnny Quick, the original Human Torch or Plastic Man? Who is supplying these people with these miracle fabrics?

Another thing about being a speedster that bugs me: 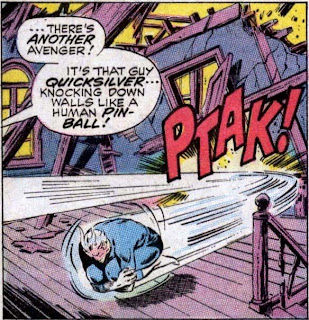 I am no physicist, but I challenge that you are impervious to harm just because you run into something quick enough. It seems to me like the quicker you run into something, the more likely you are to break some bones. This whole "pinball" stunt gets used a lot, and I'm just not sure that moving really fast has anything to do with how much of an impact you can withstand. I mean, if I run as fast as I can into a wall, someone better call the paramedics.

One thing I never understood about Goliath: 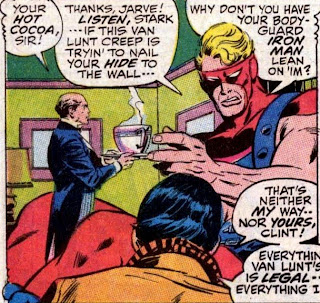 This is the "Hawkeye decides to toss his arrows for no reason and starts using Hank Pym's growth formula" Goliath, not the one you normally think of. And, I'm telling ya, the guy stayed huge as much as possible, even when inconvenient or unnecessary, like you see here. It seems dang inconsiderate to make people go out and find tremendously over-sized teacups, not to mention requiring them to serve you from your crotch region. With or without arrows, Hawkeye was something of a douche.

My greatest problem with Super-Speed comes when we invariably find out that to said person it's like they're moving normally and everyone else is moving slowly. Then we see them race across town and they're not winded or have paused at any point for a breather. The only time I can remember someone with super-speed addressed how impractical the power would be Donald Duck as Super Snooper.

In the case of the Flash and most of the other DC Comics speedsters, it has long been established that the "speed force" that gives them their powers also gives them an "invisible aura" that protects them from friction.

Ah, the Whizzer. What in the world were they thinking when they created a hero with THAT name? Not to mention, making his costume practically all yellow.

As for speedsters...yeah, speedforce stuff.

I can dig it, but what about Plastic Man, the Whizzer, the original Human Torch, etc., who didn't have such explanations? It still made no sense.

In the Flash TV series, they explained the issue away in that his costume was made of a secret (Russian?) material designed to withstand wind shear and such.

When they run super-fast, their skin exudes a micro-thin layer of super-speed-glue that holds the costume in place and keeps it from disintegrating.

Listen, if you all drank as heavily as I do in the afternoon, a whole lot of things would make sense to you, too !

I take it that particular Avengers comic had Wanda running the coffee machine instead of Jan. That's why we didn't hear anything from Wanda, right ?

During William Messner-Loebs' run on Wonder Woman, he introduced a speedster villainess named Mayfly. After her defeat by Wonder Woman, Mayfly's employer repaid her failure by boosting her power; she soon found that she couldn't stop or slow down, and eventually ran into a wall. Unlike Quicksilver, she did not "pinball"...she just died.

Goliath was actually stuck at that height, if I recall correctly, which explains why the Avengers would order some extra big cups, I suppose.

But I don't see why Jarvis has to walk up to Clint's crotch to serve him. Way to show the world what you got, Clint.