I have no idea who Jimmy Wakely is, but he had one heck of a marketing department: 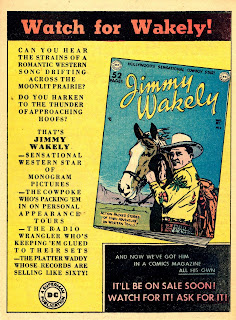 I have no idea who this guy is, but it reminds me of the time Litefoot was in town promoting The Indian in the Cupboard. It was a great movie, but he was seated at a little card table at the entrance of a grocery store and no one noticed him. It made us very sad.

A fun little treat from the Flash: 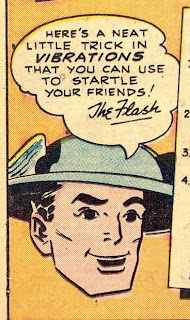 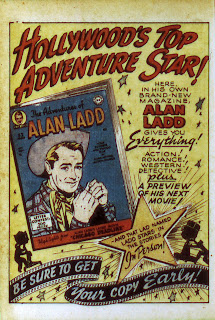 Looks like Alan Ladd wants to challenge Jimmy Wakely as to who the top platter waddy is! Easy there, guys! Let's get the women and children to safety before they get hurt by your sheer badassery! 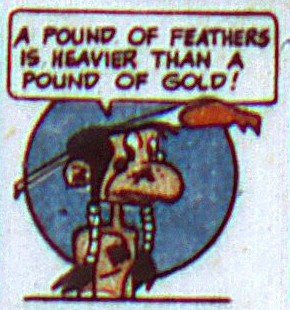 Hey! It's time for Fun with Out of Context Dialogue!(tm!):

Chicks love a man who's good with his hands. Thanks World's Finest v1 #11!

And if you'll indulge me a serious moment, today is the 7th anniversary of the tragic death of Stuart Adamson, an incredibly talented and gifted musician who had a one-hit in the 80's with his band Big Country. What many folks don't know this side of the Atlantic was that Big County had many excellent albums since their self-titled debut. He was an amazing artist and by all accounts, a very nice guy:

I miss ya, Stuart.

See you tomorrow!
Posted by Adam Barnett at 2:27 PM

I remember that "pound of feathers" trick question from years ago, so I googled it. Looks like they're actually right!

Yeh, I just looked up "troy weight": different "pounds" are used for measuring the weight of precious metals than for bullpoop and other everyday substances, so the racist stereotype is right (Elie's link makes that point, but it also offers other, contradictory answers).

So OK, next question, what on earth is a "Platter Waddy"? No google hits at all for that one...

I'm not sure what a platter waddy is, but it's my favorite phrase since "Fudge Judge!"