Why do the boys in the Justice Society look so confused? Because they just saw The Dark Knight and there's something they (like me, Beloved and Friend Kyle) can't seem to figure out: 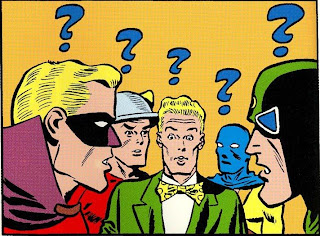 THERE BE MAJOR SPOILERS AHEAD in this question, so if you haven't seen the movie, you may want to skip today's post.

I'm serious. I'm about to give a big reveal in this question, so if you haven't seen the movie and don't want me to ruin anything for you, just tune in tomorrow. I really won't mind. 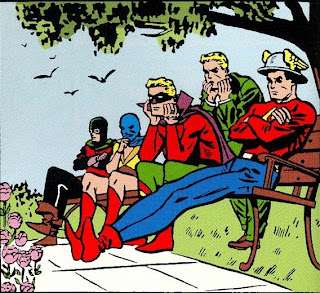 Okay, we've waited long enough. If you're still here, you've seen the movie and are okay with me asking a very spoilerous question:

Harvey and Rachel are at separate locations with bombs about to kill them. Bruce tells Gordon he's going to go save Rachel. Instead, he ends up saving Harvey. Gordon is either where Rachel is or where Harvey is when the bombs go off (that isn't really clear, but we think it's where Rachel is).

Since Bruce told Gordon he was going to save Rachel, why did they end up at opposite places? Beloved had the best theory, that the Joker had intentionally gotten the addresses mixed up so that not only would Bruce have to choose who to save, but he would accidentally doom that very person.

But, BUT!!! Bruce admits to Harvey during the end of the movie standoff that he deliberately saved Harvey.

What are we missing? Can someone 'splain this to us?

I also have a problem with people believing Batman went around and shot all the people Harvey did, but Friend Kyle tells me I'm expecting too much.

I know I posted part of this before, but I re-read the story and the whole page is worth it: 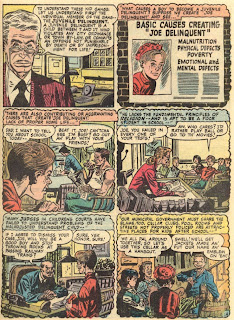 Again, I know they meant well, but what exactly were they trying to accomplish? I don't think your average 8 year-old comics reader in the 1940's is going to get much out of this other than nagging thoughts of his own delinquency because he doesn't like school or has acne (physical defects contribute to "Creating Joe Delinquent" dont'cha know).
___________________________________

Too much social responsibility. Cue the talking pigeon!: 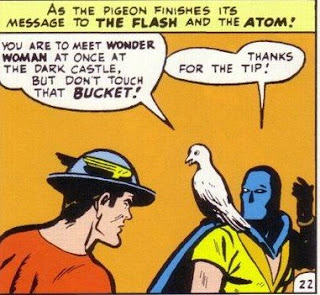 The lesson for the day:

That's right. Arouse the JSA at your own risk.

See you tomorrow!
Posted by Adam Barnett at 11:39 AM

That's right. No one strikes harder or firmer or longer or more satisfyingly than an aroused JSA!

I also love the "He lacks the fundamental principles of religion" line and the presented implications of such. The ACLU would sue Marvel and/or DC out of business if they included a line like that in a similar comic today.

Regarding Batman movie confusion: my take on it was that Batman lied to Harvey Dent so as to direct Harvey's anger and blame from GOrdon and his family onto Batman himself.

Gotta love Joe Delinquent's hat. What is that, a Jughead hat?

Wow! A jacket with an emblem and stuff??? Where do I sign up?

Oh how I love comics.

Fiddles didn't exist in ancient Rome. If Emperor Nero was playing anything when/if he watched Rome burn, it was probably a lyre.

but then where could you fit a gas canister inside a lyre?
Silly me.
Yay Comix! :-p

the aroused JSA line is hilarious.
And Joe Delinquent is the coolest name ever.

I like Kirith's explanation. I don't know if the editing or the writing made it hard to follow, but that never occured to me. Nice work!

I assumed that the joker deliberately switched the names / locations when telling batman. My logic goes like this...

Joker wants Rachelle to be the one to blow up. It would suit his ends of "creating" two-face. He also knows that batman would go to Rachelle's location (no, he doesn't know the Bruce / Rachelle relationship, but he did pull it out of Batman during the interrogation that HE's fond of her). So, tell him that he's saving Rachelle when he's really at two-face's location.

Made sense to me at the time, anyway.

Exactly, soup.... but during the big showdown with Two-Face, Batman admits he CHOSE to save Harvey, which is inconsistent with the notion that he was misled by the Joker. Kirith's explanation gives us a reason as to why Bruce would deliberately mislead Two-Face in the final scene, although I don't know why Batman didn't just say, "I mean to save Rachel. The Joker gave me the wrong address."

See? That really didn't make a lot of sense.

If Batman did admit to what really happened, Two Face would still blame Gordon for being too slow. By lying, he protects Gordon from Two Face's wrath IMHO.

Ok, here we go. The dialogue was this:

"What happened to Rachel wasn't chance. We decided to act. We three. We knew the risks and we acted as one. We are all responsible for the consequences."

I clearly misunderstood it as Bruce referring to the decision to save one over the other. As it is written I see he was speaking more in the grander scheme of things.

So, I think Kirith was right on the money that the Joker deliberately misled them, they were just counting on intelligent moviegoers (like Kirith) to catch that without spelling it out for dense moviegoers (like me).

My head now hurts less. Thanks to everyone!

I interpreted it the same way Adam Barnett did. The 'we three' means that they are talking about all of the decisions they have made, not the specific one that led to Rachel's death. If he were talking about that one, he would have excluded Dent, who wasn't in on that decision.

The Joker knew that Batman had a thing for Rachel from his actions at the party - he mentions this during his interrogation. So when he gives him the two addresses he gives him Harvey's address and tells him it's Rachel's because he knows that Batman would choose Rachel over Harvey if he could only save one of them. So by giving him the information he manages to twist a knife in Batman's heart by having him go to the wrong location.

Also, if Batman had acted unemotionally and made the choice that was better for the city, to save its district attorney and "white knight", he would have ended up saving the woman he loved.