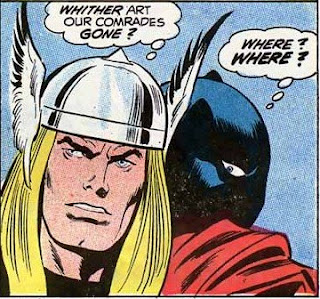 Where did Adam go? Well, until December 29th, I'm going straight home and lounging about. Like Thanksgiving, this gives me 9 days off while using only three days of vacation time, so I'm going to decompress from the occupation for a bit. I'll also get to see Childhood Pal Scotty and his awesome family, so it'll be a fun change of pace.

But I can't just take off without giving you a little somethin'-somethin', can I? I think not. 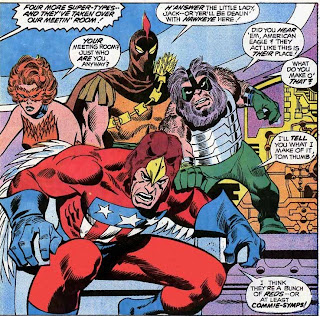 Remember when I showed you the Squadron Sinister, a thinly disguised Justice League for the Avengers to fight while Marvel and DC's legal departments sat around scratching their noggins? Well, these were the rest of them. Sort of. These guys, along with Hyperion, Nighthawk, Dr. Spectrum, and the unfortunately-named Whizzer were actually the Squadron Supreme. Turns out the Squadron Sinister was just some bad guys from our world, while the Squadron Supreme were champions of their own parallel Earth. Got it? No? It's not really that important.

Clockwise from the left, we have Lady Lark, Hawkeye, Tom Thumb and American Eagle, who were homages to the Justice League's Black Canary, Green Arrow, the Atom and Hawkman. They got a bit more creative with the new guys, making the Atom's counterpart a mechanical genius who had a tremendous arsenal of weaponry (while the Atom was but a scientist who shrank really tiny) and Hawkman's doppelganger was a zealot against Communism who would have made Joe McCarthy proud (as opposed to Hawkman, who wasn't even from Earth).

There would be some changes of names, and as the Justice League added Firestorm to their ranks, the Squadron would add their own nuclear-powered guy named Nuke. He was pretty lame, while Firestorm was largely awesome. 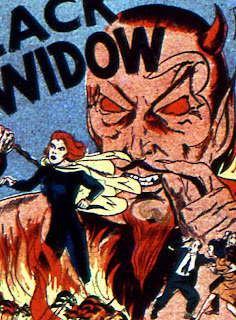 Turns out there was a Black Widow long before the one that we think of today. You know, the one who really doesn't do anything but still gets asked to join the Avengers over and over again?

Well, the original version was actually Satan's agent. Yup. Turns out Satan gets a little impatient at collecting souls and if you are a bad enough person, he'll send the Black Widow after you to personally drag you to Hell. And she'll gladly facilitate this.

Now, that, my friends, is an awesome premise. Kind of like DC's Ragman, whose patchwork costume is made up of the souls of the departed damned. Only where Ragman actually gives those souls a shot at redemption, the Black Widow just took you straight down. The fast way. That's good stuff.

There was one funny moment in the story, though: 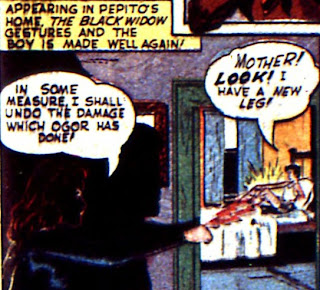 You got a new leg while you were sleeping, Pepito? Was it a third leg, perhaps?

And no, ladies, I'm not gonna explain that joke.

And for one last "What The-?" moment, here's Namor taking orders. From our government. 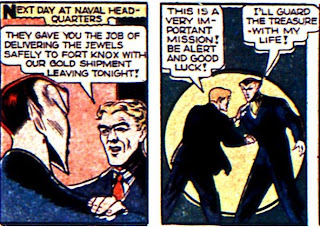 I have no words. I kept waiting for him to snap that guy's neck for looking him directly in the eye, and he's all "Yesser, yesser, whatever you say, sir! I'll guard your government's treasures with my life!"

I'm one of the surface-dwellers Namor wants to wipe out, and I'm offended for him. Did Namor do some time at Guantanamo Bay I never heard about?


Well, that's it for me! I'll see you on December 29th! Merry Christmas! Happy Hannukah! Hope you have a great one! Stay safe!
Posted by Adam Barnett at 1:31 PM

So the "Green Arrow" doppleganger was named "Hawkeye"? But that's the name of the archer in the Avengers. WTF?

At least Guantanamo Bay has a beach. Ft Knox is in Kentucky! How is a Namor gonna help the government there? By swimming up the Ohio and organizing the carp?

They soon changed it to "The Golden Archer".

"You know, the one who really doesn't do anything but still gets asked to join the Avengers over and over again?"

So hilarious, and so true!

Did the Black Widow get an entry in
Seduction of the Innocent?