There's no question that the Legion went through their highs and lows, with hardly anyone in the huge roster not changing their costume at one point or another. But Timber Wolf has the rare distinction in the Costume Hall of Shame not for sucking once: 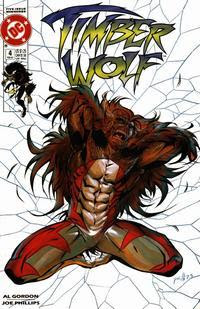 And this is cutting him a break, because his very first costume wasn't exactly iconic, either. This last look, from the 1992 mini-series, was an attempt to make him a cross between the X-Men's Wolverine and the Beast. Despite being a relatively cool cat in the Legion, and a guest appearance from the Creeper (which is almost always a good time), this mini led to... well, absolutely nothing but the Costume Hall of Shame. 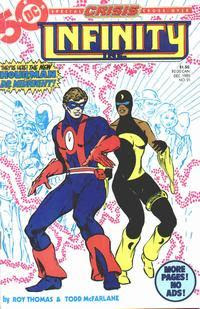 And while I'm on the subject of crappy costumes from the 80's, check out this two-fer from Infinity, Inc when they relaunched Hour-Man and Dr. Mid-Nite. Not only are these things straight outta Breakin' 2: Electric Boogaloo, but the classic looks were so cool that they're still used today with only some minor tweaks. You shouldn't mess with the classics *cough* Sandman! *cough*
_____________________________________

And, just because I'm in a mood, let's check out this fine product from the ad page inside the cover of Young Men #4:

What? Fly in an airplane I built myself out of cheap parts? Why, I'd be stupid not to!

Heh. That made me feel a little better. See you tomorrow!
Posted by Adam Barnett at 3:14 PM

Man... when I was like sixteen, I struck a conversation with the prettiest girl in my classroom, and she had a monster-sized loogie dangling from her nose. That sure did turn me off. I had no desire for her since then...in fact, that's partially the reason I got into comics in the first place, I guess.

Wait, are you talking about the lame second-costume golden age Sandman, or the Neil Gaiman version of the character. Because he kicked ass.

I liked the first Timber Wolf costume change, I just didn't like the facial reconstruction that went along with it.

I never noticed how bad TW's costumes were. I was too busy cringing whenever poor Cham showed up in mauve and yellow (with those put-your-eye-out-shoulder-point things that belong only on elves). That color combo hurts my eyes whenever I think about it.

Really, I don't think that first TW is so bad. Maybe if the legs had all been one dark color... He's still classier than Hank Pym.

Right before this one, TW had a decent look. And the Cockrum-era where he had his "wolf" face was a classic. This one was just too much for me.

And I'm talking about the green-suited Sandman with the fedora hat and the gas gun. I hated the yellow and purple look.

Bwhahahahahaha! Oh God, I am crying TEARS of laughter at Hourman's costume. What possible purpose could those boots have?

But Timberwolf's outfit is pretty lame too. Although I have to say that Rokk's Space Corset is still my absolute favorite horrible costume.

Adam, you mentioned Cockrum, who had SO many great costume designs, especially for the women- Phoenix, Ms Marvel, Storm, Saturn Girl, all have a similarity that is still sexy, and cool.

BUT may I say those flappy bucaneer boots for the male superheroes are an abomination. I SAID GOOD DAY SIR! They are so godawful, and I think it's Cockrum's doing. Those awful bell-bottom boots on superheroes - the ugly, it hurts. Capt. America can keep his, but dear God, there was no need for so many supers to wear them. FUGLY.
Just silly-looking.

Loved that TW mini, but I think that's less a costume, than the pair of pants he was wearing at the time, like the Hulk or something. Or pajama bottoms.

Hey, the first Timber Wolf wasn't that bad. I have to agree that the furry look just doesn't suit him at all.

I have noticed from this blog that you really love comics, and that this is just your special way of showing it. I'll talk to a doctor about this.

Can I have a prescription, too?
XD