You know, Captain America was killed last year and everyone went bananas, but what about the Star-Spangled Kid, who had been a character almost as long and was killed 20 years ago? Granted, I never forgave him for starting Infinity, Inc. in the 80's, but let's show the Kid some props, courtesy of his tale in World's Finest v.1 #9:

For starters, it had a rare crossover with Batman and the Joker:

Granted, that didn't look like much, but that was long before heroes started appearing in each other's stories all over the place. Those few panels alone probably required six editorial meetings and twelve memos from the legal department. 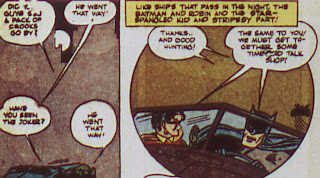 Okay, let me get this straight: Someone is jealous of me because I have something, they go out and commit a crime to Keep Up with the Joneses, and that's somehow my fault? I'd say the Kid was a little co-dependent.

But how to solve this poor wretch's problems? Surely something logical and well thought-out! After all, this is the Golden Age, when they made comic books like they used to!: 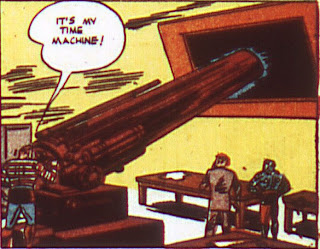 Wow, just.... wow. They shoot your ass in the air and you land in a different time period. Suck on that, H.G. Wells! You had it all wrong! 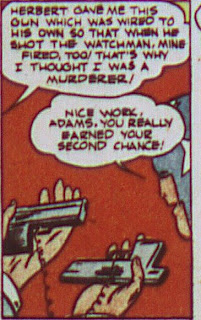 I hate to pee in your Cheerios, Adams, but didn't you notice that wire dangling from your gun running to the Herbert's gun beforehand? I'm not expecting you to be the president of the NRA or anything, but didn't something seem a tad amiss?

But who is the dumbest person in the story? You guessed it: 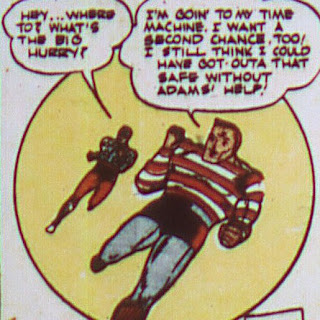 So, just to be clear: Stripsey was freed from a death trap, and he insists on going back into it just to prove he can get out his own way (and apparently, to also prove that he is almost too stupid to live). Stripsey: The DC Universe's answer to David Blaine.

Aw that joker.
Such wit.

And any person who has a time machine which is essentially a big-ass cannon is bound to be that stupid.

Stripesy: He can build a time machine, but he's dumb enough to use it to go back to a life-threatening situation.