I remarked yesterday about how DC and Marvel would get around being unable to use each other's characters by creating their own knock-offs. While having the Avengers fight the Justice League would have been all kinds of cool, the lawyers were ruining everyone's fun and no one could work it out. So, the next best thing was to create guys with identical powers. Thus, the Avengers fought the Squadron Sinister in Avengers v1 #69: 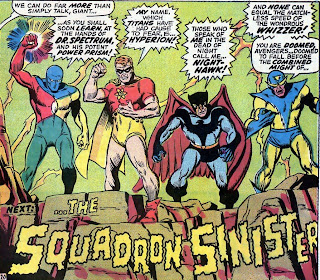 See? They're basically Green Lantern, Superman, Batman and the Flash with different costumes, origins and personalities, but you'd have to be an idiot not to see what they were going for. Still, it would be decades before the Big Two would start working together, and we took what we could get.
_________________________________ 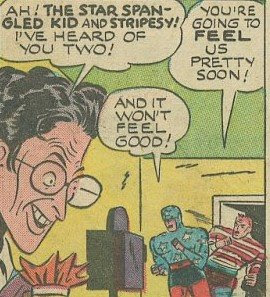 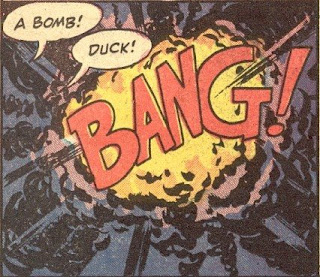 Hey! 10 year-old boys everywhere, check this out! From the pages of Young Men #4: 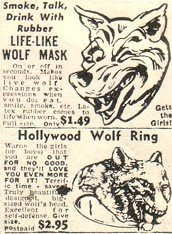 Chicks love perverts, especially when they can laugh at themselves! I love how the ad encourages young readers to wear the mask while smoking and drinking, while the ring is good "for self-defense." I presume that will come in handy when fighting off the police while they investigate the sexual battery complaints against you.

See you tomorrow!
Posted by Adam Barnett at 3:20 PM

I am totally ashamed to admit that the "Bomb! Duck!" joke actually made me laugh out loud. :-\

I'm overwhelmed by the futility of anyone saying "Duck!" at that point in the bomb's explosion. At best I would hope for "What was your first clue?"

The Whizzer! Always good for a laugh. I'm still working on developing The Tosser, a villain-turned-hero something like a low-velocity Bullseye. Good for putting a grenade, grappling hook. or secret tracking device precisely where you want it every time.

Gosh, EVERYONE knows that ducking will save you from a bomb. I'm surprised that it even has to be said!

And yes, I always give a shame-faced giggle when I read about the Whizzer...snort,snicker.

Apparently Night-hawk's name can only be spoken in the dead of night. The rest of the day he's known as 'that dude who rips off Batman'.

Hyperion is confused. Titans don't fear his name, they fear his lack of pants.

I too, laughed out loud at the 'bomb duck' joke.
Good show sir.

Blaming Roy Thomas for the state of modern superhero comics is rather like going into a yard that's thigh-deep in the turds of a hundred dogs, grabbing the first poor old mutt who ever did a crap there, and shouting "BAD DOG! BAD DOG!" But when I see something like the Squadron Supreme I feel like doing it.

Well, this explains why the 'Avengers' showed up in the DC universe and raped the Authority...

I always liked how much warning people had when a bomb was thrown, i.e., "Look out! Bad Man Nitro Kale has escaped police custody and is throwing a bomb from the third story window right at us! It'll blast us to bits! No... Time... To... Get... Away... from... the... danger!

I think I know why The Wondrous Whizzer's suit is yellow...