But then you read All-Star Comics #48, and you start to see why. 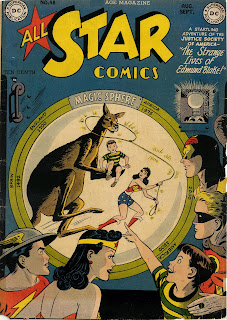 Shall we tug at the heart strings? We shall!: 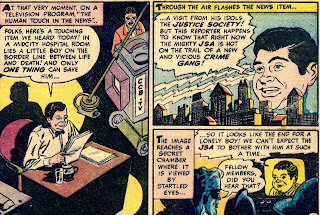 I positively love how they called the kid a "bother" when they talked about him. If you're the kid, you really can't win at that point because either the JSA blows you off because you're a pain in the neck, or they're making a huge sacrifice to visit you on your deathbed when there are other things they'd clearly rather be doing.

Of course, once there's a public hoo-hah like that, you pretty much have to visit the kid whether you want to or not, so there they go: 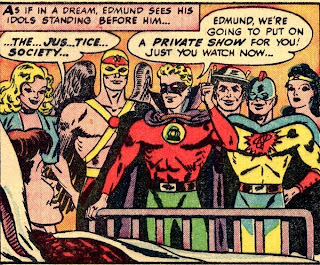 Now if I were a kid and a bunch of adults showed up at the foot of my bed in costumes talking about "putting on a private show," I'd be shouting "Stranger Danger!", but this was clearly a more innocent time. 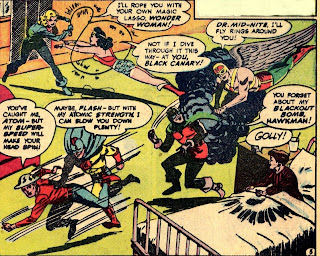 Keep in mind this kid is about to go through surgery. I'm sure the hospital's legal department is tickled pink that there are grown people wrestling and tossing around smoke bombs in the kid's room before they cut him open.

And then the entire JSA gets taken down by one lone guy with a hose: 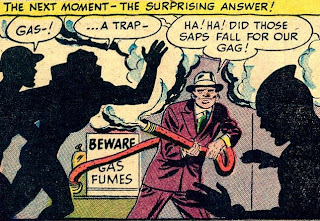 Okay, I have a couple of problems here: (A) Is there a single member of the JSA that couldn't, by themselves, make this guy eat that hose, much less the whole group and (2) shouldn't that guy also be unconscious since he's waving enough gas around to take out a group of super-heroes yet isn't wearing a gas mask himself?

For once, though, everyone is involved in the big battle at the end, even the womenfolk!: 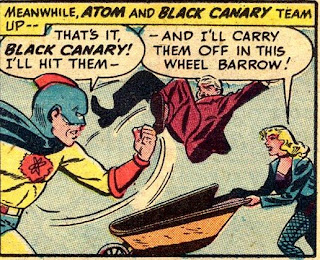 And I have to ask, where exactly is she going to tote them off to? Is she going to drown them in wet concrete? Because that would be twisted, but in an awesome sort of way. That'll teach them to ruin sick little Edmund's big day!

See? I should be responsible for all retroactive continuity matters in comics. Black Canary typically carted bad guys away from the field of battle where she would silently kill each one, regardless of the nature of their particular crime. DC and Marvel couldn't print enough copies to meet the demand, I tells ya! 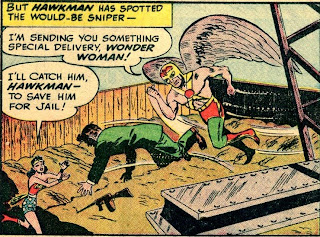 Yeah, Wonder Woman! Your contribution to the struggle by... catching another unconscious bad guy has shown us that your talents had previously been sorely wasted as our secretary!

That one was almost too easy.

See you Monday!
Posted by Adam Barnett at 11:06 AM

"...I can blow you down plenty."
This is why the Comics Code was invented.

Adam, you SHOULD be responsible for all retroactive continuity matters in comic. And film, and TV!

What kind of gas is it? Looks more like smoke... and what would that thing be doing in a hospital room?

It's a hospital and they have a hose in it marked 'WARNING GAS FUMES"?

I don't like Black Canary's face in the 'we're going to put on a private show'. It's creepy.

You know, I could see Black Canary hauling the bad guy off on a gurney or something...they WERE in a hospital after all...but a wheelbarrow? I've BEEN in hospitals, and that's not something that you typically find fight outside a sick little kid's door.

Unless it's a SPECIAL kind of hospital.

Adam -
Another wonderful post. Aren't old comics just a wonder to behold. I just love this stuff. Makes you wonder what was going through the minds of the readers at the time. At least in this case, it probably left them very fearful of hospitals with dangerous gas and wheelbarrows in the rooms.
Dave Olbrich, FUNNY BOOK FANATIC
http://www.funnybookfanatic.wordpress.com

Well, if Wonder Woman and Black Canary came to my bed offering me a "private show" - I'd figure I was the luckiest boy on earth!

Hey... no fair, I wanted to hear more about the Magic sphere and the Kangaroo! Whata Gyp!... ( kidding). Thoroughly enjoyable post as always~

Um... does anyone else find it odd that the newscaster with the power to make his giant floating disembodied head appear over the city and shoot rays out of his eyes never appeared as either a hero or a villain?

I would totally but the miniseries that told of Black Canary's wheelbarrowin', murderin' past.