Superman vs. A Guy Who Is Totally Not Hitler

Let's finish up our look at Superman #14.  He's still not flying, but he can jump like nobody's business: 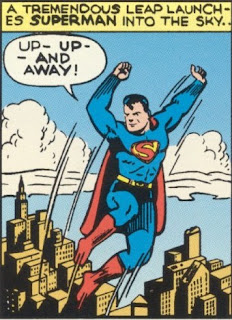 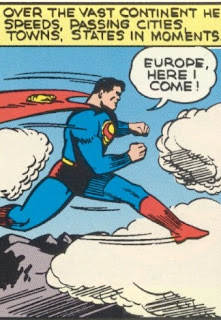 It's this part I have a hard time with: 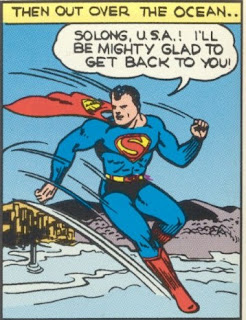 Okay, are they saying the Superman could jump the entire length of the ocean at once?  Because if not, he's got a problem.  He's not going to be able to jump again without planting his feet on something, and I don't think the surface tension of the water is going to cut it.  I suppose he could go down to the ocean floor and propel himself up, but that's some mighty slow going.  I'd just jump as far as I could and swim super-fast the rest of the way.

Anyway, he's on his way to open up a Checking Account of Whoopass under this guy's name: 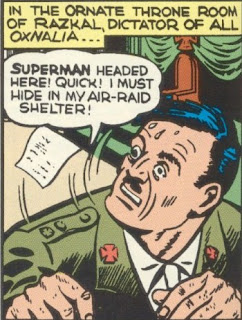 Yeah.  Totally not Hitler, right?  It's Razkal, dictator of Oxnalia.

Totally not Hitler.  In fact, let's just call him "Not Hitler." 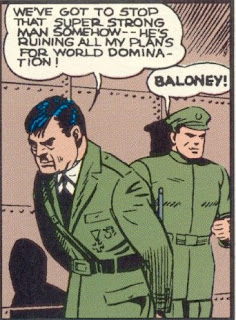 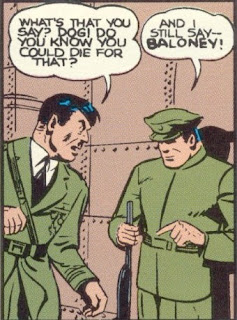 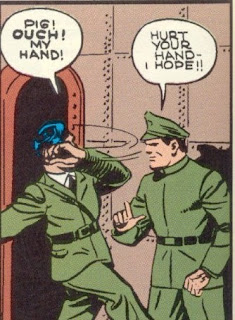 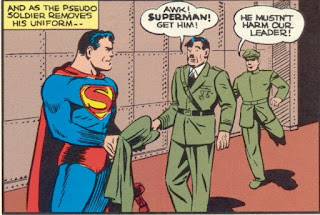 So then Superman decides to take out the country's military forces: 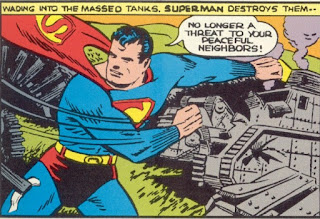 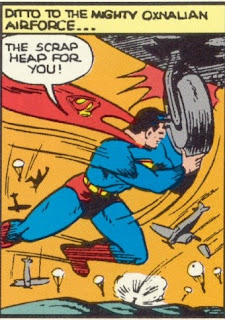 Which is fine, but not nearly as satisfying as if he had done to someone who looked like Hitler who actually was Hitler.  I mean, it's not like anyone can't tell who "Not Hitler" is supposed to be in reference to.  Then again, I guess you couldn't end the story  the same way if it was Hitler.  Although that just made me wonder why Superman didn't turn around and go after Hitler next. 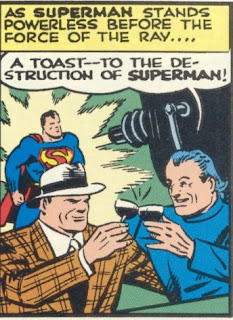 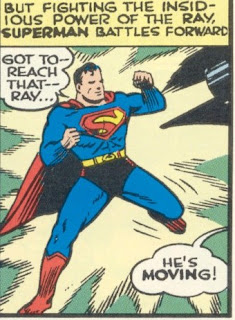 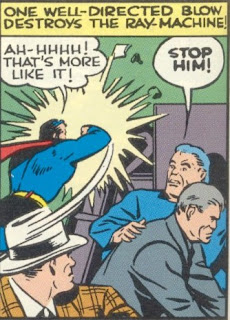 I seem to recall that in the DC universe, there was some magic spell that prevented super-heroes from going to Europe during World War II. But they keep changing their continuity, so I don't know if that still holds.

So was this the Secret Origin of "Up...up and away"? I always thought that phrase was created for the radio to clue listeners that Supes was about to fly.

Aaron: you are thinking about the Spear of Destiny, and that wasn't brought up until the 1980s in ALL-STAR SQUADRON. Roy Thomas gave that explanation, drawing on Hitler's beliefs in the occult.

Later, in the Elseworlds THE GOLDEN AGE, James Robinson explained it as Hitler having a "secret weapon", a guy named Parsifal who could duplicate any hero's powers.

Adam: you might know this better than I, which hero DID fight the real Hitler first? A Timely hero, a DC hero, or someone like Bulletman or Red Bee? I've always thought it was Captain America, and seeing the I Can't Believe It's Not Hitler (tm) guy makes me wonder how long any company made Hitler lookalikes before going straight to Hitler himself.

I'm pretty sure it was the original Daredevil... as in "Daredevil and the Little Wise Guys" of the Golden Age. The "Daredevil vs. Hitler" comic predates the iconic Captain America #1 (with Cap punching Hitler on the cover) by several months.

And yeah, Smurf... I'm pretty sure that was the first time we heard that expression. I don't think it became a catch phrase until Superman first flew in 1943's Action Comics #65 (which is when most people think it was first uttered). If said it earlier than that, I don't know about it.