Whenever that mermaid shows up, there's almost always blog material.  Such was the case with Superman #139: Hmmmmm.... I can't imagine the response I would get if I started taking pictures of a married woman to keep in the old "Fortress of Solitude," if you know what I mean.  And I love how he presumes her husband won't mind.  Not that Superman would bother asking the guy.  What's her husband going to do if he does have a problem with it?  Unless he finds some Kryptonite on the ocean floor, I think his objections would be duly noted and ignored. 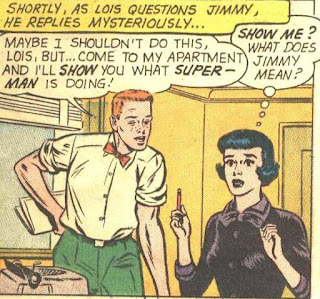 Is Jimmy macking on Lois?  I think he is.  "Come to my apartment and I'll show you what Superman is doing."  Winkety wink wink wink.  Lois has every cause to be concerned.  That's some Fun with out of Context Dialogue / Artwork (tm!) right there! 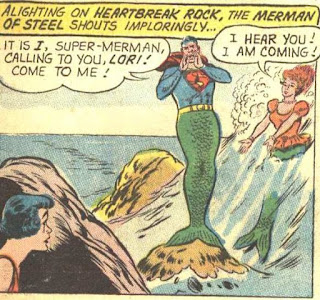 This has been a CMNS Moment... of Comic Book Greatness! (tm!)

Let's jump ahead a couple of issues to Superman #141: 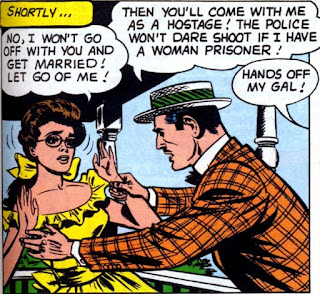 Marry him... be his hostage... it's six of one, half dozen of the other, really.  Beloved will tell you that.  You might as well go with marriage because there are tax breaks. 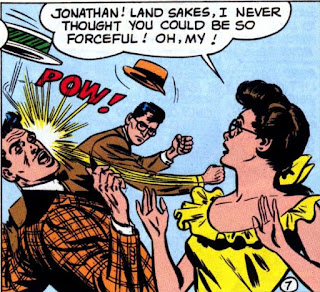 I looked it up, by the way, and "land sakes" was a polite way of saying "for the Lord's sake."  Kind of like "heck" and "gosh."  We learned something today!

And now, another episode of...

Did I put away my marijuana? (tm!) 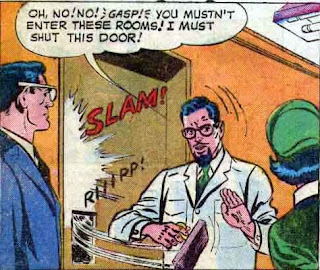 This has been another episode of...

Did I put away my marijuana? (tm!)

Superman really does rock those fins though, doesn't he?

Adam, in order to be fair to Superman, you should have pardoned his foolery with Lois' own camera: he had had a crush on Lori Lemaris since his Superboy times (see, for instance, Adventure Comics #280 (January, 1961 issue date). Vingt ans d'amour, c'est l'amour fol, as Jacques Brel used to sing.

Land sake, *I* had a crush on Lori Lemaris. And don't get me started on when John Byrne reintroduced her and she was wearing those turtleneck sweaters.