Keeping things freshy-fresh with a look at Hit Comics #1! 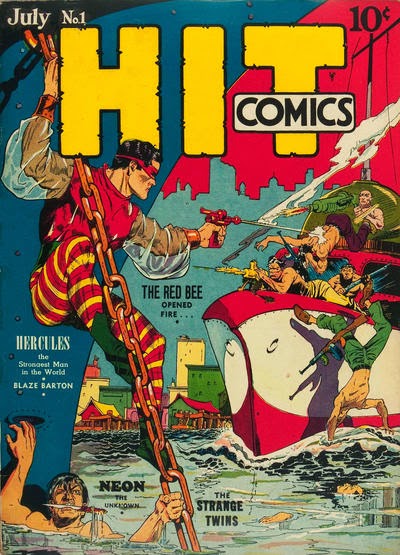 You know, I don't just hate the Red Bee's costume.  The sleeves kind of scream "insecurity" to me, because I think that wearing poofy sleeves is some attempt to make your arms look bigger than they are.  You know, how guys will stand with their arms crossed and push the arm fat with their hands so it looks like they have huge biceps?  Not that I would ever do such a thing...

We'll get to the Red Bee another day.  The first story in the ish was that of Hercules.  Now, when you think of Hercules, you might think of the Greek Demigod.  I certainly did.  But I was wrong.

You see, this guy came home to his mom and... 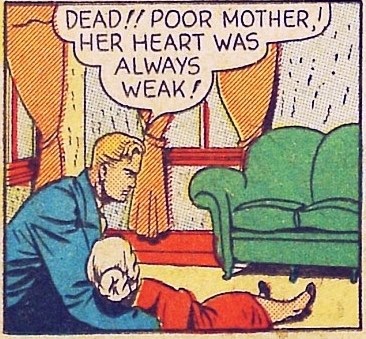 It's sad, of course, but it was surprising to see because I grew up in an era where Peter Parker's Aunt May walked around just one good startle reflex from a fatal heart attack for decades. 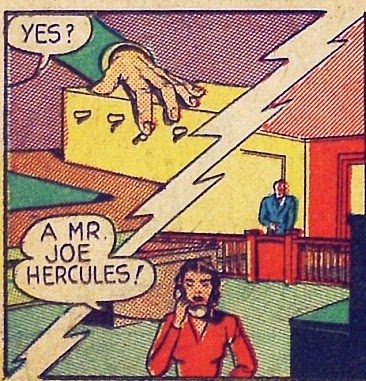 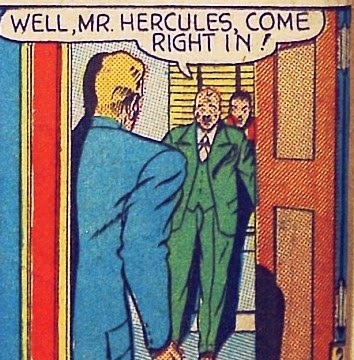 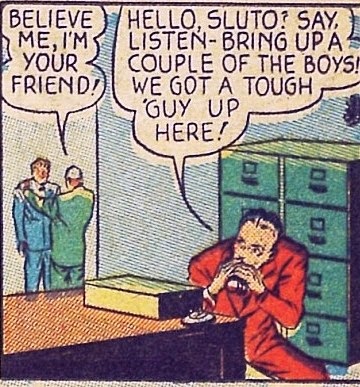 I realize not all of my readers may not be familiar with the term, but if you were brought up in the United States with the name "Sluto," you took a lot of teasing and probably would grow up to be rather anti-social.

Wow... I just saw that "Slut" is a surname.  You learn something new every day.

Anyway, one thing leads to another and Joe Hercules isn't able to resolve a simple business disagreement without getting himself arrested.  So, he does what any man would do and uses his inexplicable-yet-superhuman strength to bust through a jail wall and go back to administer a whompin'. 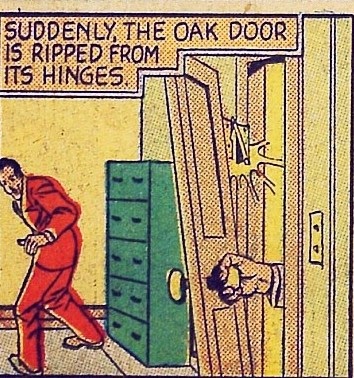 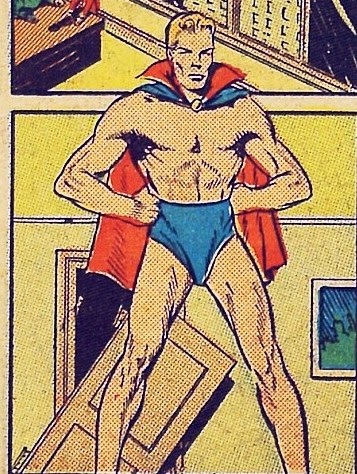 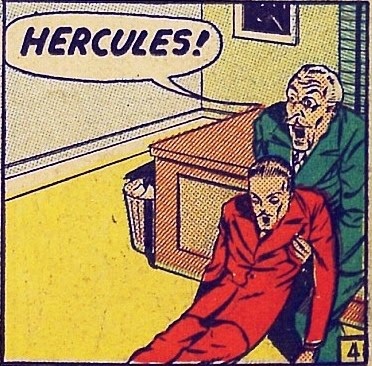 It's probably more the costume that made these guys freak out than the fact that he knocked the door off its hinges.  In his defense, I don't think Joe Hercules had a woman in his life at this point (what with his mom recently deceased and all), so he probably just slapped together whatever he could with no fashion guidance whatsoever.  You can see why we should give the Red Bee a break with his outfit.

Anyway, he brings the racketeers to justice using illegally-obtained evidence and it's all good.  He even has a lawyer get him out of that whole "jailbreak" situation: 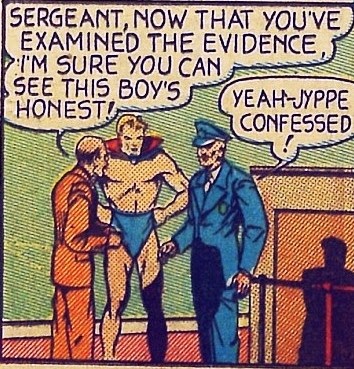 Hmmmm... I don't know that I can see that this boy is honest, but in that outfit I can certainly see that he's circumcised!

And let us leave Joe Hercules with an installment of Well... That's That. (tm!) 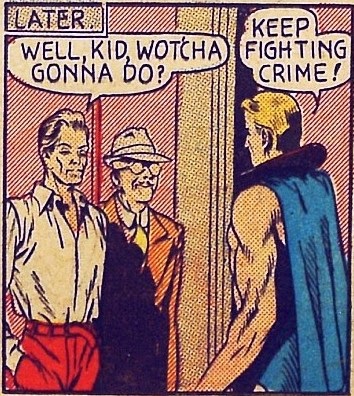 Hit Comics is off to a promising start, to be sure!

Hey he's got a cape at least!

I was always confused by The Red Bee considering the one color a bee cannot see is the color red.

(The reaction of that guy in the next panel, though... yeah, that's probably the facial expression I'd make on seeing someone dressed like that bust through my door, too...)

Wayne, I think a bee would wear red because he would think it made him invisible.

You know, now that I think about it... why does Hercules wear a costume at all? It's not like people don't know who he is? I'd think he'd be like Iron Munro and just kick ass in casual clothes. :-/

A Swedish-speaking acquaintance of mine told me that in Swedish "slut" is used for "The End" in comics...he proved it by showing me a book of Phantom reprints with a huge "SLUT" pasted onto the last panel of each story.

Or maybe they were saying Phantom was...no, that can't be.