In Which Batman Fights Death... and Loses

Folks, I may take some heat for saying this, but I tried to watch the movie Birdman over the weekend and... well, as much as I love Michael Keaton and movies about people looking for validation, this film was a snore.  Academy Award, Schmacademy Award, that movie played like a  pretentious film school project.  What a disappointment.  Avoid. 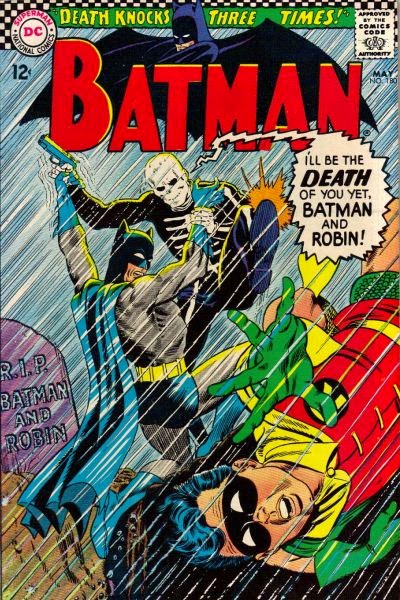 Isn't that an awesome cover?

The inside story actually lives up to it (sorta).  Although this was strange:

I didn't realize Batman needed Robin to cheer him on like that.  Frankly, I think the adult should make sure the child feels supported, not vice versa.  This was a weird moment and it made no more sense in context.

I think we're starting to see some influence of the Batman tv show, which came out at around that time: 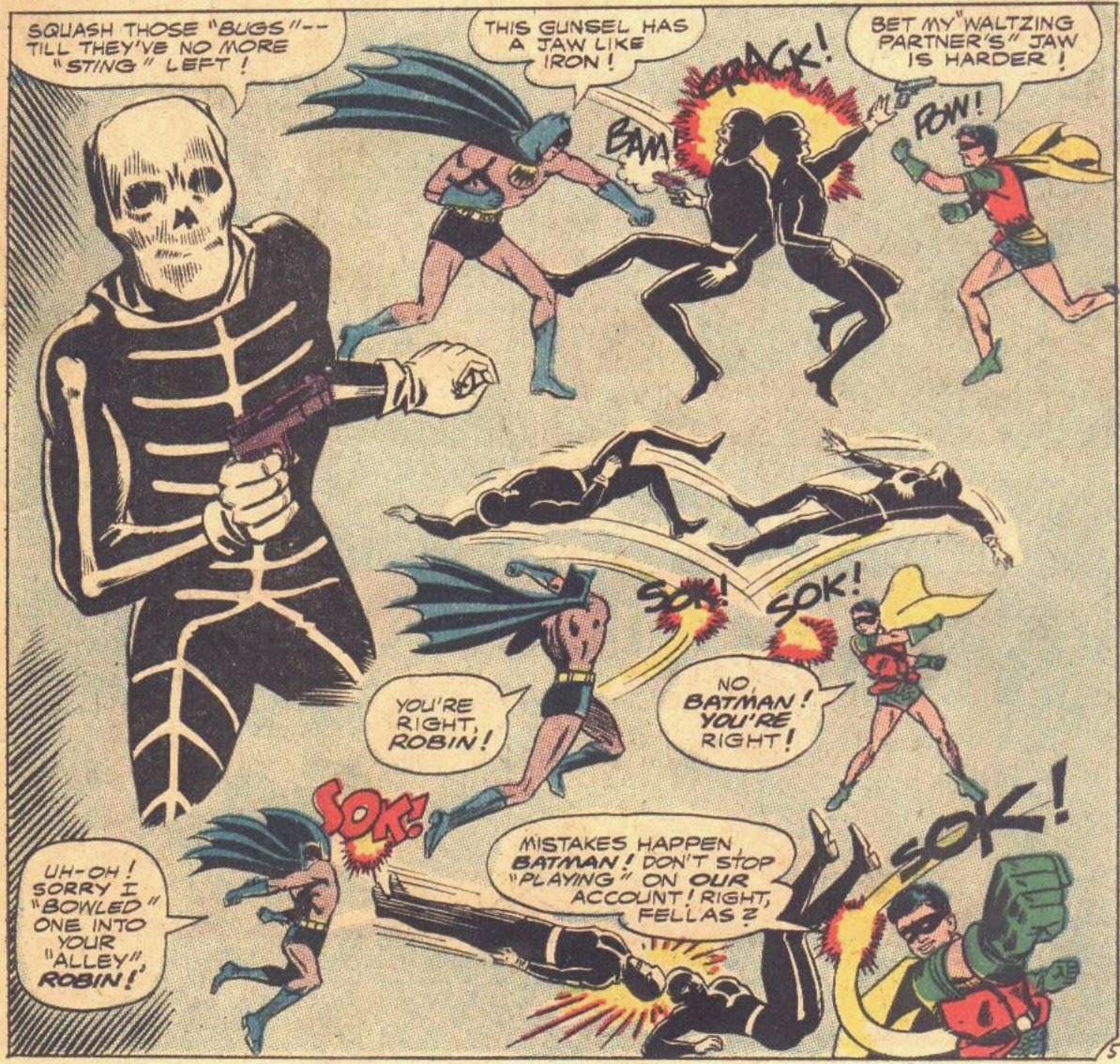 See what I mean?  The villain sends the henchmen to go fight and there are a lot of sound effects, just like the show.  I'm not sure if that was to make the comics more inviting to fans of the show, or if it was to ensure that the show would be more like the comics that the fans were reading.  But we hadn't seen much of that sort of thing up to this point, so I'm curious to see if any other elements of the show creep in.

I mean, Aunt Harriet is already in the comics by this point, but the less said about her, the better.

Anyway, the villain's name is Death-Man, and the costume is grafted to him somehow.  I'm not sure how hard anyone tried, but that's the story: 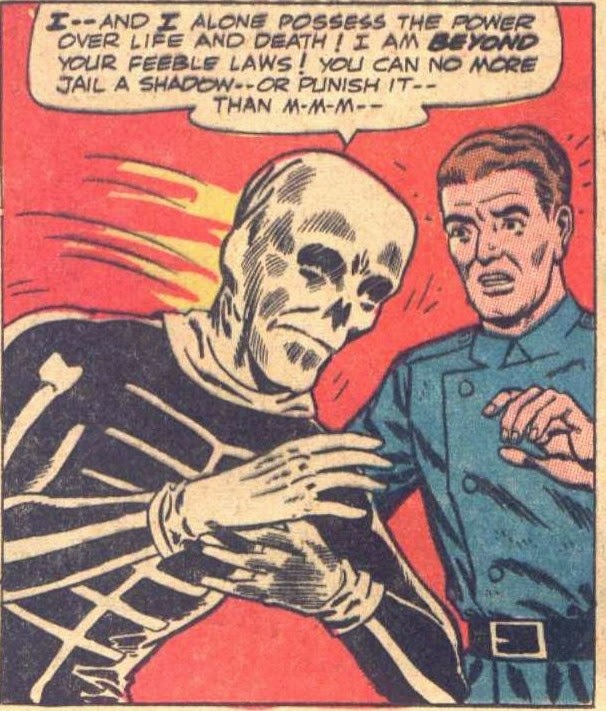 His gimic is that whenever he's caught, he keels over and dies.  This leaves him beyond the reach of the law.  He then pops out of his grave and starts the whole thing over again. 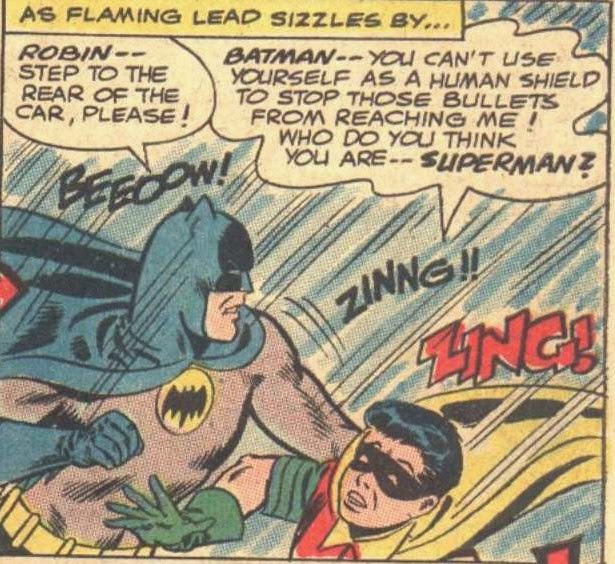 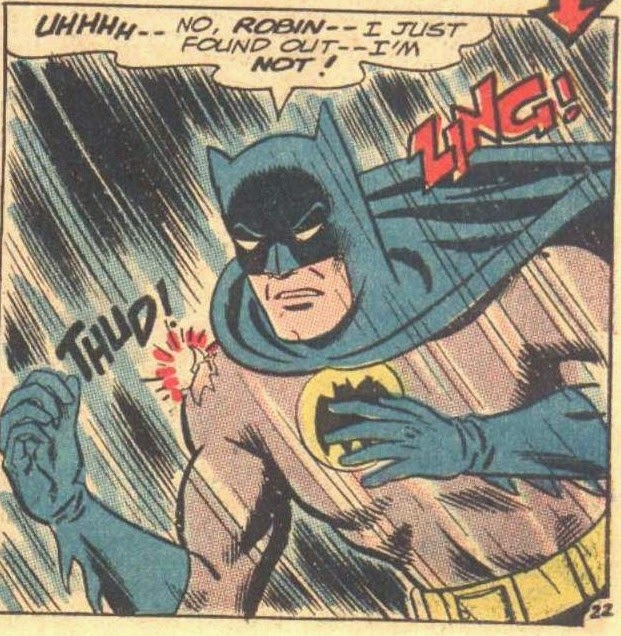 Here was a great moment where Death-Man and Bats go careening towards an open grave:

I'm not saying I could do any better, but I'm not sure the art really did this scene justice.  They didn't do two-page scenes back then, and this would have made for an awesome one.  Alex Ross should totally re-do this one.

I have a rather obvious question: if he couldn't take the costume off, did that mean he could never use the bathroom? Because that's a fate worse than death.

I don't think he could eat or drink through that mask, either... so the bathroom problem solves itself. COMICS!

Totally off-topic, but as a wee lad I thought the sound effect "barroom!!" was very funny, because it spelled out "bar room."

It didn't take much to amuse me as a kid.

Maybe it was some sort of drinking game among the creators...

Interesting legal system they have there in Gotham. The judge has to order the death penalty because the jury verdict was unanimous? But... all jury verdicts in a criminal trial are supposed to be unanimous, whether for conviction or acquittal. (If not, that's what a "hung jury" is.) Gotham must have had a LOT of people on death row until they decided to toss everyone into Arkham instead of prison...

Good legal point, Green Luthor. I suspect that everything Kanigher knew about the law could fit on your basic cocktail napkin.

It looks like Death Man was first promoted to Lord for Jiro Kuwata's 1967 manga re-telling of the story (as seen in the recent BatManga book), where Batman and Robin a bit more directly responsible for his death.

i prefer to look on this as a long lost classic of batman vs killink!