Marvel Boy is Perhaps Not So Marvelous.

Yesterday, I mentioned the "1950's Avengers" from What If? v1 #9 and it put Marvel Boy on my radar for reasons I don't know.  And this is what I found out.

First, the Marvel Boy from the 1950's "Avengers" was not the first character with that name.  He was actually the third, so we have Recycled Names x 2! (tm!)

This was the first one: 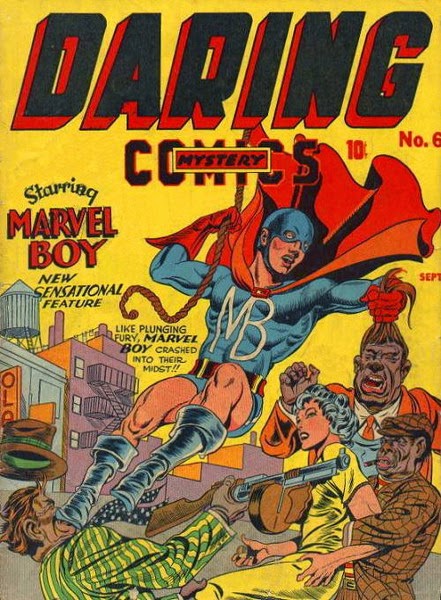 He appeared in 1940 or therebouts.  I wish I had a copy of this, because the origin story of that character is quite bizarre if I understand it correctly.  I think it's worth going through the whole thing, so hopefully I'll find someone with a copy they'll loan me.

But check out the Marvel Boy that appeared a few years later from U.S.A. Comics #7 and see if you notice something familiar: 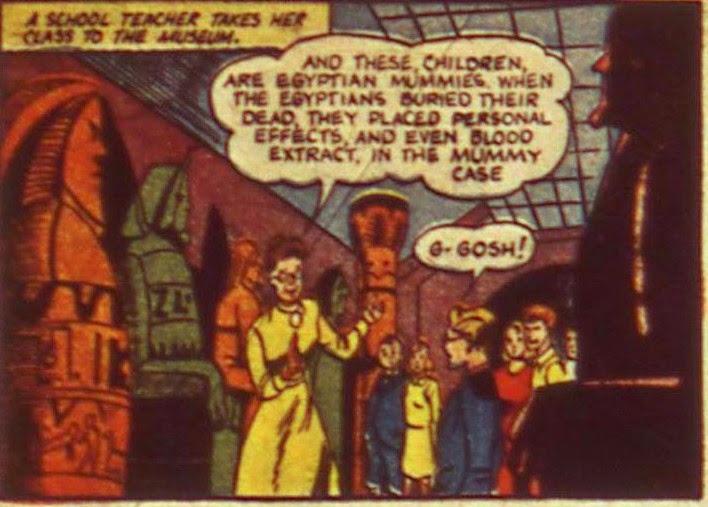 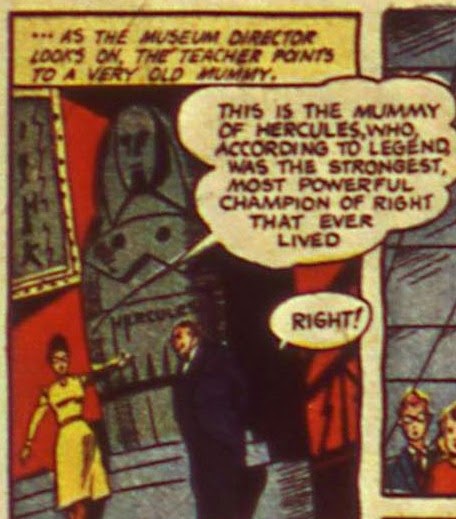 Got so far?  Keep going. 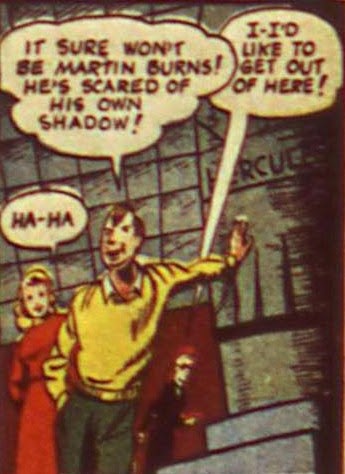 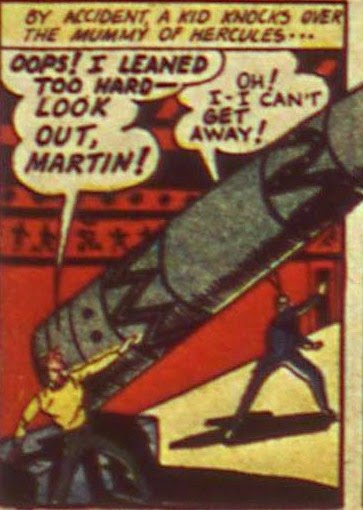 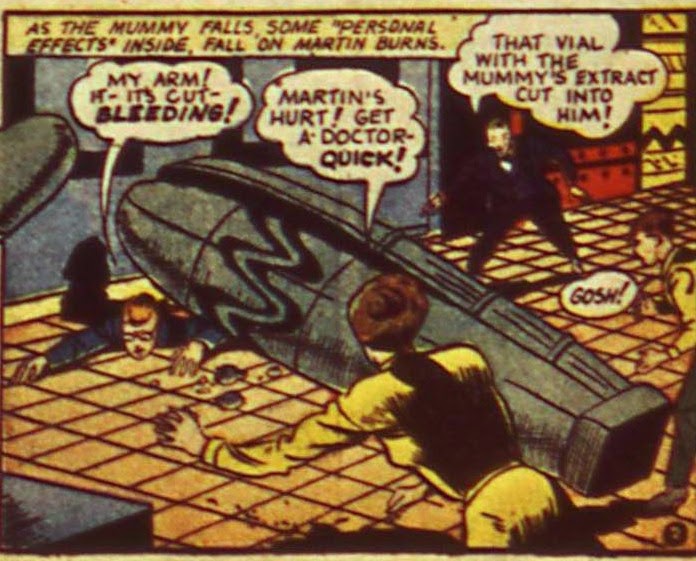 One of the students gets an injury! 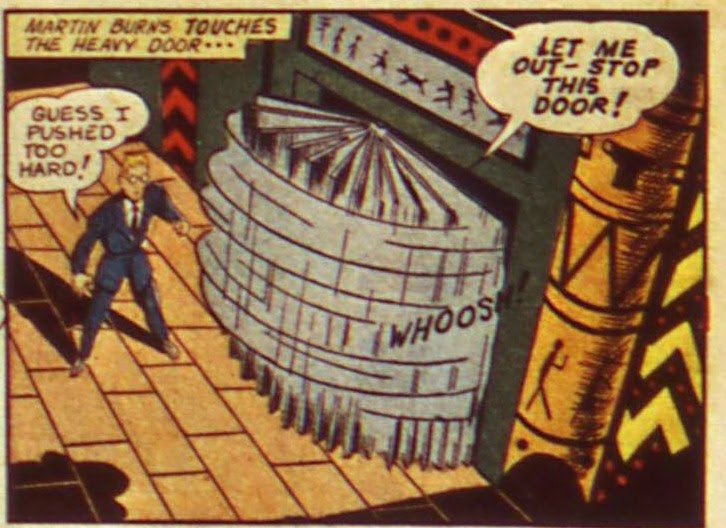 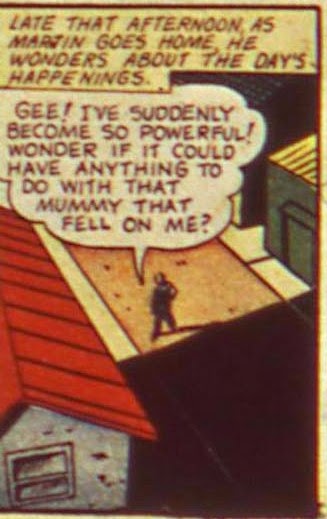 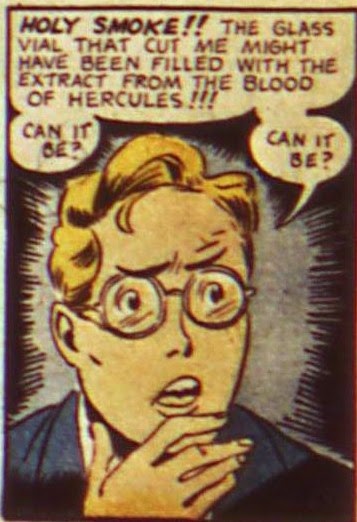 Get it?  The accident taking place on the high school field trip put something in the resident nerd's blood and said nerd now has super-powers. 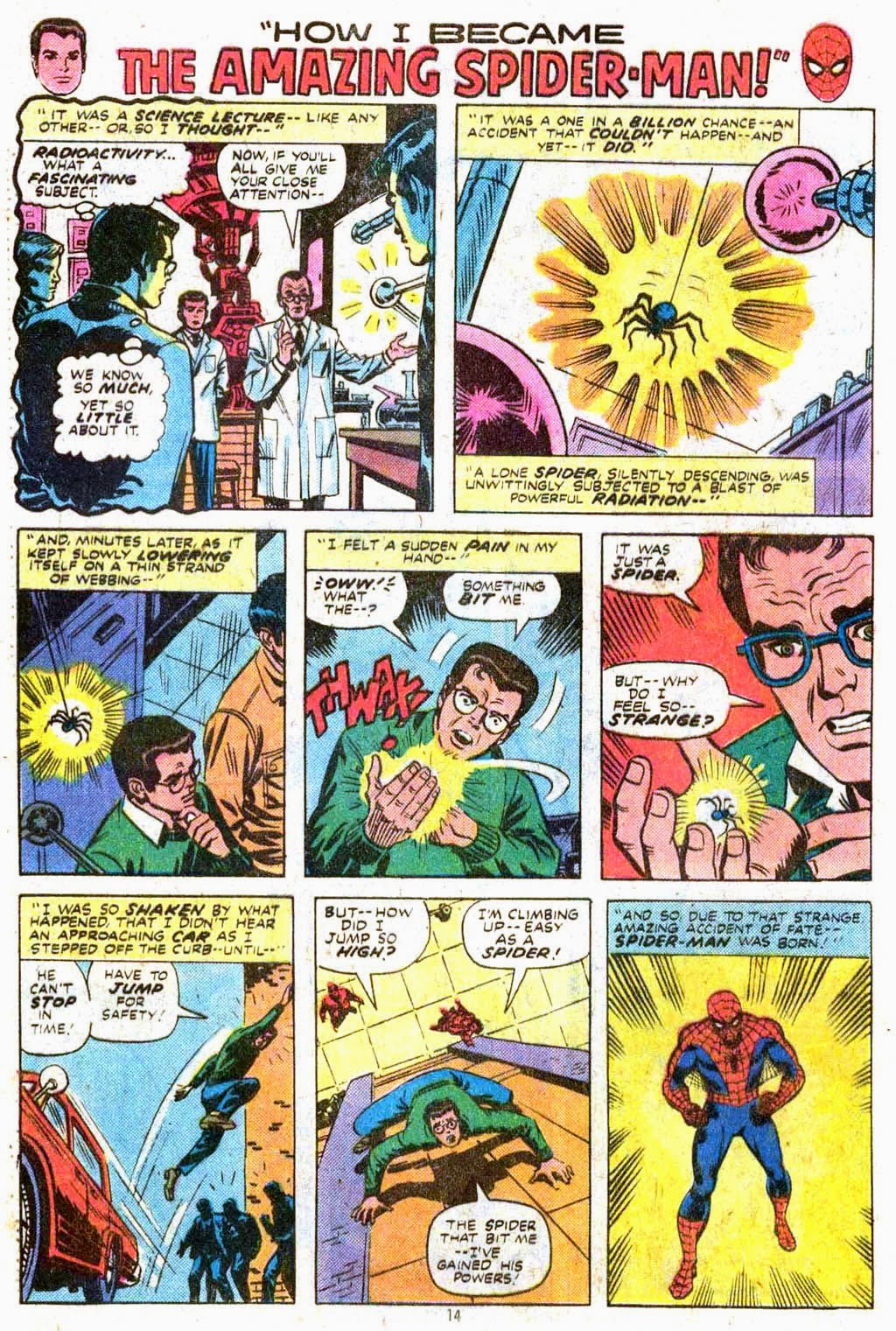 See?  Nothing gets past our investigative journalism skills here at CMNS (also known as, "Whatever Adam happens to stumble upon).

Then things get really strange: 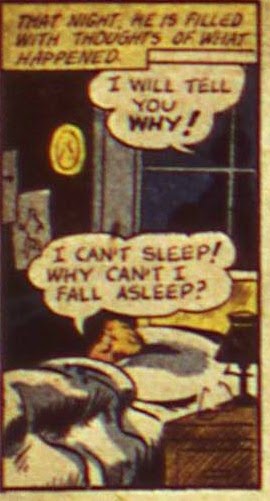 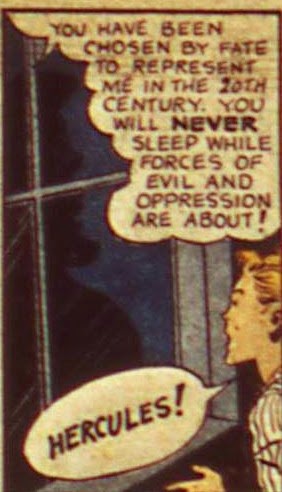 Hmmmm... if you can't sleep while forces of evil and oppression are about, you're never gonna get any sleep.  That's just the world in which we live, folks.

This is kinda funny: 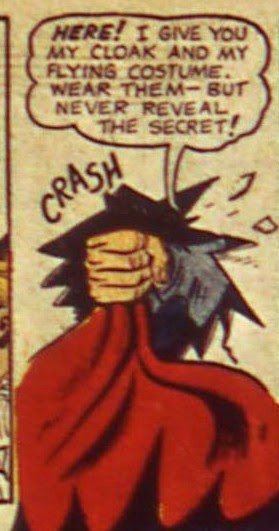 Um... I would have opened the window for you, Hercules.  There was no need to punch a hole in my parents' house. 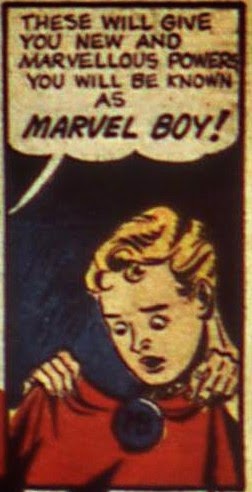 He seems rather aghast at the looks of that costume. 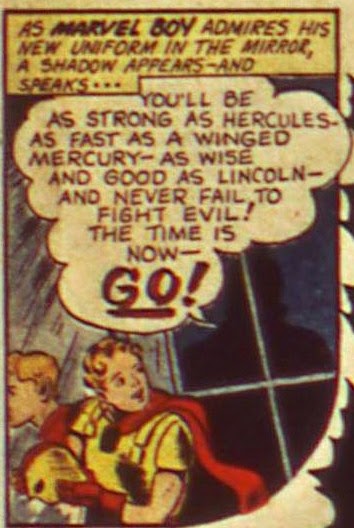 Strong as Hercules, fast as Mercury, wise as... Lincoln?  You know, they took a detour from mythology when it comes to wisdom in SHAZAM as well (Solomon, the "S" in Shazam, was a Biblical figure).  Why is everyone so afraid to give Athena her due?

Let's check out the costume. 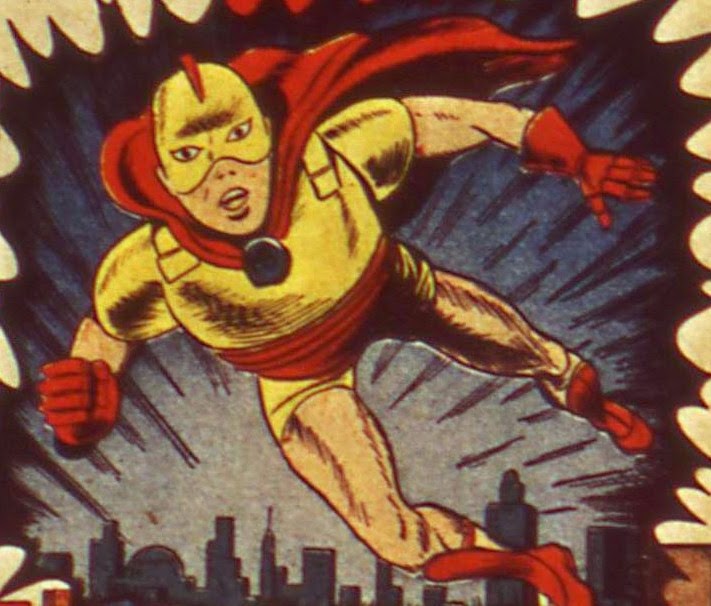 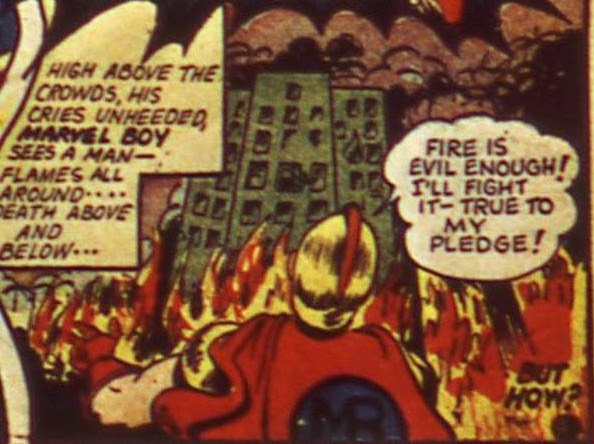 Fire is evil?  I think that's a relative term.  Fire can spare your life, depending on the circumstances.  Fire just kind of is.  I hate to get all Zen on you, but I don't really think "Fire is evil enough!"  I'm not saying don't rescue the people inside or anything.  I'm just saying perhaps you wouldn't be assigning morality virtues to fire if  you had embraced Athena's wisdom.  I'm just saying.

What a strange character.  10 years later, we have yet another Marvel Boy.  For a stupid name, it sure gets used a lot.

Is that first Marvel Boy comic by Mac Raboy? He and Lou Fine were fantastic. Didn't one of them have to skip WWII because of having polio?

I tried read Grant Morrison's MARVEL BOY in trade a few years back and it was incomprehensible. Or I had been hit on the head repeatedly as I read it. Sometimes, you just need a different time frame to read a trade. Never the case with Golden Age books, I can read me a BLUE BEETLE anytime, anywhere, and have fun.

Back to yesterday's comments: one way DC is handling their concept of Silver Age is considering SHOWCASE#1 as the start of the SA. Makes sense, but what is way cool is that their SHOWCASE books from the 50s start in mid-1955. For example, I grooved on STRANGE ADVENTURES but it started with #64. No Capt. Comet stories, boo! Same with TALES OF THE UNEXPECTED. DC is pretty screwy these days, but the way they handle SHOWCASES shows a certain commitment. Have you ever bought or perused any of them?

I bought some TPB's and they were all kinds of awesome. I think 1955-1969 is probably a fair assessment of the Silver Age. I'd say the Bronze began and ended in the 1970s because the 80s were totally different. Same with the 90s, early aughts, etc.

The "Daring Mystery Comics" Marvel Boy was actually a Simon/Kirby creation. I've got to get my mitts on a copy of that. Mac Raboy drew Captain Marvel Jr. back in the Golden Age IIRC.

There you go. I remembered that Jerry Ordway always had a Raboy Avenue somewhere in the series from the 90s. Without looking him up, I'm pretty sure Fine worked on a lot of Quality Comics.

I buy almost everything on Amazon because Chicago is left with ONE Barnes & Noble and a few used bookstores thanks to our Borders/B&N war of the 90s.

I just found out that SP: TALES OF THE UNEXPECTED v2 came out, like about two years ago, so I'm all over that, and the Legion Showcases have finally caught up to Dave Cockrum.

The first one I ever bought was THE MARTIAN MANHUNTER and I swear it was like reading the episodes of The Fugitive in comics form most of the time. Bunch of hoodlums always hanging out in shacks in the woods, waiting to rat out Richard Kimble if he didn't sew up a bullet wound. Granted, there were no meteors from space that carried fire-breathing dragons shooting around the coastline, but if I had been writing the series, you know David Janssen would have been great.

I like to date the Silver Age as beginning in 1956 for DC(when they came up with the new version of the Flash)and in 1961 for Marvel(when the Fantastic Four arrived).

Also hilarious in this story is the Nazi henchmen wear yellow sweatshirts with big swastikas on them. You don't wear team outfits when you're doing overseas sabotage!

Since when was Hercules mummified?

That panel with Martin in bed is an extreme example of the still-sometimes-in-use trope of "always read the balloon on the left first." Never mind that it's significantly lower. Or that it's only slightly more to the left. Or that the one you're supposed to read second is actually OVERLAPPED by the narrative caption...