That Ain't No Way to Treat a Lady Cop Tuesday!

How much snarkiness can you get from a single comic? When that comic is Lady Cop, you can get two days. Easily.

I didn't know the police could detain you if they overheard you saying you may have contracted an STD. Then again, I haven't read all of the Patriot Act. 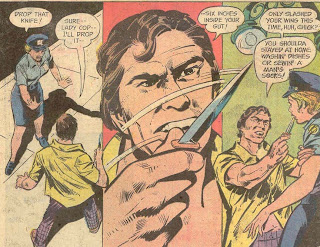 Is it worse dealing with the chauvinist's knife, or with his sexist comments? Oh, what a woman in the workforce had to tolerate back in the 1970's.... 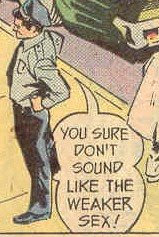 ... and even from one's co-workers. That was a backhanded compliment if ever there was one. I smell a grievance with your name on it, Officer Caveman! 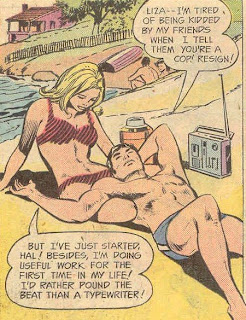 And even her loved ones didn't support her! How did she ever manage to find the strength to go and face the world when she couldn't even get the support of her well-meaning-but-insensitive-boyfriend? 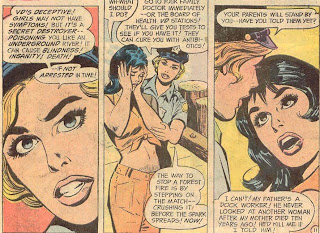 Not that anyone asked my opinion, but if you have VD and it's treatable, why would you tell your father? I mean, treat the VD and keep your yap shut! This is really bad advice, but remember - she's a woman feeling alone in her struggle to take on a sexist world on her own uncompromising terms. 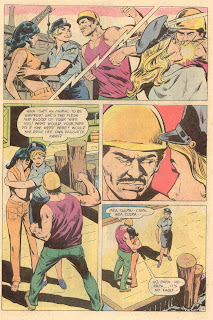 See? What did I just say? If you'd just driven the young lady to the health department, you might not have taken a punch from her old man. And why did your head go the wrong way when you got punched? And how were you able to just shrug it off like that in the next panel? And why didn't he get arrested for Assault & Battery on a Police Officer? This really is complicated!

Wow. That's all over my head. On a personal note, other comics in contention for Worst Comic I Ever Read were: DK2: The Dark Knight Strikes Again, anything Judd Winnick writes that features Captain Marvel, the Wanderers, the Omega Men, Shadow Hawk, most stuff written in the '90s and any of the X-Books after John Byrne left.
Posted by Adam Barnett at 1:17 PM

I'm also a little curious how Lady Cop managed to have four different hairdos on that lastpage.

Heh heh. You spotted that one too, eh? I am SO stealing that.

I know Dad's a bit old fashion but why is he speaking Latin?!?

Goodness... this really is atrocious. Thank you, Adam.

Prez should have made the Green Team undersecretaries of the Treasury.

Oops,I put this comment in the wrong section. Probably from the trauma of switching from Gildas to my real name.