I know it seems like I cut modern comics a break, but (a) it's more fun to read the Silver and Golden Age stuff and (b) the modern comic creators are a bit more sophisticated, so it's not as satisfying or fruitful to troll modern books looking for material.

Then, you run across Last Hero Standing #2: 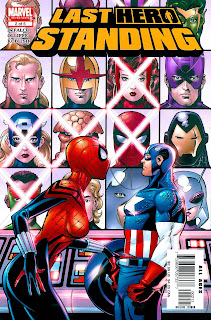 Hey, Spider-Girl! Keep your hands off Captain America's wiener! I see where that hand's going!

Oh, my. It's Superboy #89, and whaddya know! A spaceship is landing in Smallville. Again. 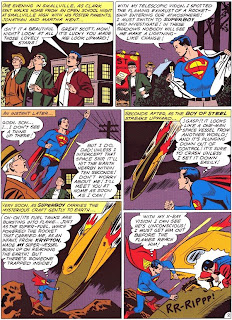 I'm surprised we haven't had falling spaceships smack into each other at the rate they've been coming down.

But, hey! This one has the first appearance of Mon-El! So that's actually pretty cool.

Hmmmmm... you might have powers, so go stand in the fire? I know I've addressed this before, but can't you test powers with something a little less dangerous? This strikes me similar to the way they used to burn you at the stake to see if you were a witch....

Um, warden? You know that's Lex Freaking Luthor, right? Maybe having him do a little "constructive time" around electronic parts might be a teensy little security risk. I mean, they don't let prisoners have shoelaces, but they're going to put Luthor in a room full of devices? What's next? Letting Deadshot join the skeet-shooting program?
Posted by Adam Barnett at 3:12 PM

"Warden? Y'know ... prison is pretty dull. Howzabout I borrow that iPhone and Wii fitness for the day?"

Oh, and you usin' those diodes?

I know - But in my mind Luthor speaks with a Brooklyn accent.

I believe that the Luthor clip is from 'The Death of Superman' which was one of Mort's imaginary stories. In the real DC Universe of the 60's, they wouldn't allow Luthor to have diodes. Oh wait, they probably would. Nevermind.

They should just let Luthor have the keys to the place and tell him to sweep up before he leaves.

Not only is Spider-Girl reaching for Captain America's junk, she's a foot taller than him. I gues Cap likes to be dominated

Check out Nova v1. Nova tests how invulnerable he is by smashing through a junkyard at top speed.

Actually, I want to say that this Luthor escape is from when he met the Legion of Super-Villains. See, Luthor remembered that Lightning Lad from the LSH had foiled one of his plots against Superboy so he theorized that if there was a Legion of Super-Heroes in the future, then there must be a counterpart evil Legion so he built a time barrier smashing radio to contact them.

I also think that DC could publish a trade paperback of nothing but Silver Age Luthor escapes from the opening pages of various stories. I remember at least three or four off hand.

I take it that the X's are heroes that Spidergirl has 'taken care of' already?