Hey!  Robert Gillis was kind enough to send me some panels from the always-bizarre Lois Lane title.

Here's the setup: Lois got superpowers somehow because all kinds of strange physiological things happen to her in her own title despite the fact that they rarely happen anywhere else.  She decides to become "Superwoman," partly because she's not that creative and partly because she's one of those chicks who tries out your last name long before you've given her any inclination that you're that serious about her.  You know the type.

Anyhoo, she makes lightning with her hands.  Thusly: 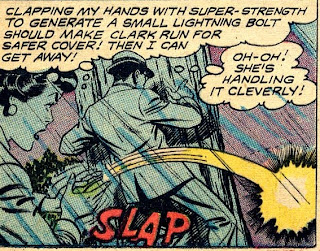 Okay, lightning comes about when ice and water particles collide and build up large electrical fields in the clouds.  The lightning is the discharge of that.  Sooooooo... while I appreciate that she can applaud with the best of them, I don't think the prerequisite conditions for lightning have been met.  But Lois Lane  is a comic meant for girls, I suppose, so why worry about being accurate?  How much science does a girl need to know to be a secretary or a housewife?

And here we have Lois failing to see through yet another disguise: 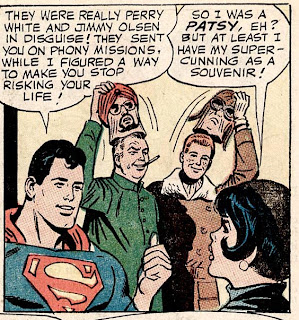 I'm impressed that Perry White was able to hide a cigar under a mask.  I'm not certain from this vantage point that it was actually lit, but that would still create kind of an odd bump in the mask.  Egad!  You have a tumor shaped .... almost like a cigar!  You should really get that looked at!  Of course, the king of the ridiculous disguise application is still Batman, what with the ability to hide rigid bat ears in a skull cap, but that's still some pretty good work by Perry White.

Email ThisBlogThis!Share to TwitterShare to FacebookShare to Pinterest
Labels: lois lane, master of disguise, science gets in the way of good storytelling