All the News We Think You Need to Know!

So I'm reading my fourth "Press Guardian" story, and I'm more convinced than ever that they're just making things up as the go along.  We've already changed the main character's name and costume, so anything goes. 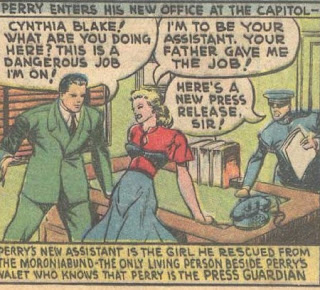 So the girl he rescued from the Moroniabund figured out who the Press Guardian was... probably because he waltzed around without a mask in front of her last issue.  But who is Perry's valet?  Heck if I know, and I've been reading this from the beginning! 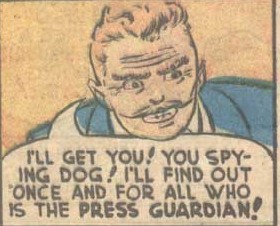 Well, it's not the greatest mystery.  His name is "The Press Guardian," and he only seems to be interested in things that directly affect his father's newspaper.  And he usually wears the same suit after he puts his mask on, and it's a really pronounced green color.  You don't exactly need a Rosetta Stone to figure this one out.

How is he able to shrug off bullets?  That has yet to be explained and since they keep going back to that ability, they really need to explain it.  It's starting to grind my gears a bit.

And now, an off-screen death: 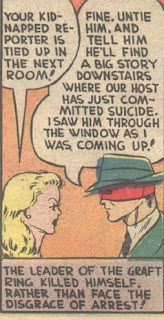 Well, that was quite an afterthought.  When and how did the leader of the graft ring kill himself?  It seems like a story centered on the art of journalism would be a bit more forthcoming in the details.  This must have been the predecessor of Fox News.  ZING!

Email ThisBlogThis!Share to TwitterShare to FacebookShare to Pinterest
Labels: making things more difficult than they need to be, my powers are a secret even to me, off-camera death, press guardian