Following up with yesterday's teaser, Pep Comics #4 did indeed have a cross-over between the Shield and the Wizard.  Or is it The Shield and The Wizard?

Anyway, here it is:

And they exchanged info and went their separate ways.

I'm not picking on this story for going in that direction.  Heck, the Justice Society spent 80% of their time on solo missions before actually teaming up.  Remember how many issues of World's Finest it took before Superman and Batman actually got together aside from the covers?  That was just how they rolled back in the Golden Age.

What I noticed was how civilized everyone was in their first meeting.  If this had been a Stan Lee comic, the two would have beaten each other half to death and caused at least a couple of million dollars in property damage before declaring a draw.

The Comet, you may recall, is on the run after going on a killing spree whilst under the influence of hypnosis. So, he finds himself out in the sticks where some kind of mining is taking place. 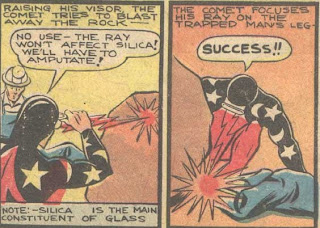 So he amputates that poor guy's leg and is actually feeling pretty good about it.  The camera cut away from the poor guy languishing in pain, clutching his stump in agony while the Comet flew off in a moment of self-congratulation.  Of course, one wonders why he didn't try to disintegrate the ground under the guys leg to try wriggling it out, but I'm not the guy with the lifty visor.

The bottom line: The Comet gives up fighting crime to work for the Occupational Health and Safety Administration: 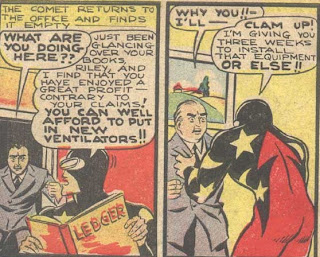 No, not really.  But wouldn't that have been hilarious?

Email ThisBlogThis!Share to TwitterShare to FacebookShare to Pinterest
Labels: a crime he didn't commit, golden age, making a bad situation much worse, the comet, the shield, the wizard

There must have been silica in the earth UNDER the guys leg, you dweeb! Don't you know ANYTHING??!!!

I'm wondering if the writer got the idea for this story from one of the most hideous famous instances of corporate crimes against workers:

The Hawks Nest Incident in West Virginia, committed by the Union Carbide Company.

Well it seems like there's an awful lot of silica around there. I guess it's good that they're mining it!