A Mess of Mulligatawny Worthy O' St. Patrick Himself!

Okay, so we're at the sixth issue of Pep Comics, and the Comet still hasn't cleared his name.  Everything was okay when he was just executing suspects left and right, but... you know.

Anyway, the Comet has come up with a new plot device mission: Of course he has a plan: He puts on a civilian disguise.  I'm kind of surprised that his new sidekick Thelma didn't figure that one out on her own, but... you know, she's a woman and all. 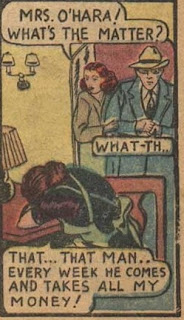 Yes, those mobile plans can be difficult. They give you that free phone and then...

Oh, wait.  There were no mobile phones back then.

It turns out Mrs. O'Hara doesn't read things before she signs them, because.... well, she's a woman. 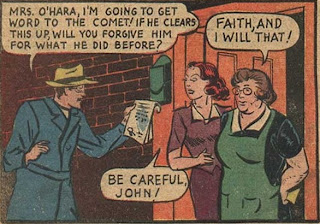 Really?  I'd like to think that if I were murdered, Beloved wouldn't be so quick to call it even for a financial windfall.  But... well, she's a woman.

Anyway, the Comet hires a crack legal team to establish contractual fraud  finds the guy and threatens him:

Oh, yeah.  Whatever he writes under the threat of death will totally hold up in court.  This will solve everything.

And, as a random aside, I think this officer has pooped his pants: 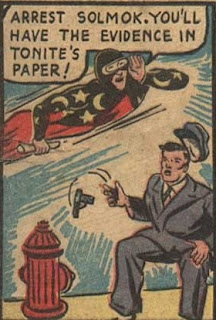 I mean, there's really only one reason to take that kind of stance if you're standing.  You know what I'm saying.  Don't act like you don't see it.

And Mrs. O'Hara is happy and stereotypically Irish: 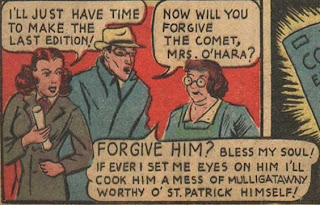 Keep in mind, this is the guy who killed her husband, and no one knows that the Comet was hypnotized.  But now she's practically set up a room for him in her house.  I guess people just didn't hold a grudge for that sort of thing back in the day.

Email ThisBlogThis!Share to TwitterShare to FacebookShare to Pinterest
Labels: I'm not saying I could do any better as an artist but..., master of disguise, shrugging at things that should probably be really upsetting, the comet

mulligatawny is a curry-flavored soup of East Indian origin, made with chicken or meat stock. I'll take some! I loves curry. Irish people make curry? Who knew?

Yup! It was brought back to the UK by British colonists back in the day. The Indian version is indeed a curry-based soup but these days is more of a vegetarian appetizer. The name comes from an anglicized molegoo and tunee, literally meaning "pepper water!" The Anglos added meats, coconut milk, almonds, apples, rice, eggs, and/or cream to make it a main dish-worthy stew. We're all about the infotainment here at CMNS.