The Fuse is Lit! ZZZZZzzzzzzzzzzz!

So I'm reading only the sixth story of the Press Guardian courtesy of Pep Comics #6, and what's the first thing I see?

That HEY!  It's time for Fun with Out of Context Dialogue! (tm!) 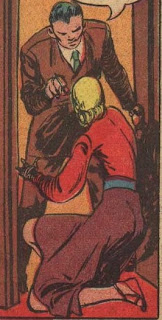 Okay, so you're saying to yourself that Adam doctored that one.  And I kind of did, but I kind of didn't.  You see, she was at crotch-level in the panel that had the caption box, but she was talking and totally ruining the bit (women... they're always talking and ruining the bit).  So, we went for the panel where she was still on her knees and at crotch-level, without her yappin'.

And guess what the Press Guardian does again?  He lifts a guy over his head.

And I don't care how many times he does it, this is shenanigans.  This character has displayed super-strength and bullet resistance without a smidgen of explanation, and this is the sixth installment of the series.  I'd better get some answers soon.  I'd just better, that's all.

And we have an actual cliffhanger!  Thusly:

Okay, that's a fuse of gunpowder, so I get that.  What I'm not understanding is why the gunpowder is making all the sleepy noises.  Shouldn't it be making hissing noises?  Do you think they meant to do a bunch of "s" letters for sound effects and got it backwards?  If so, that's some pretty sad editing there.  The gunpowder sounds as bored as we are with the Press Guardian and his silliness.

Email ThisBlogThis!Share to TwitterShare to FacebookShare to Pinterest
Labels: Fun with Out of Context Dialogue, inappropriate sound effects, press guardian