Forget the Writer or the Artist, I Buy Books Based on Who the Associate Editor Is!

So I'm leafing through All-Flash Quarterly #8.  You may recall that the powers that be put a poll in the book, asking readers to weigh in as to how they felt about Winky, Blinky and Noddy as well as whether they wanted to see full-length stories or four shorter ones.  Winky, Blinky and Noddy (unlike Jason Todd) were given a vote of approval by the readers, while readers were reportedly evenly-divided as to the length of the stories.  So, they cut the figurative baby in half and announced that future issues would have two longish stories of 32 pages (rather than four 16-pagers or one 64 pager), disappointing everyone equally.

I, for one, wanted short stories but I was about 70 years too late to cast a meaningful ballot.  I wasn't in favor of long stories because that meant when a story opened with something like this: 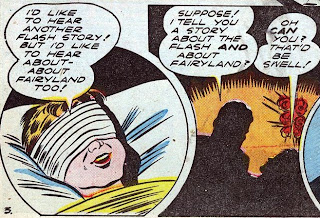 What struck me as funny about this is that the kid was blind and was having complications from an operation designed to restore his sight.  The upshot was that if he couldn't stay awake without stimulus (no Mountain Dew for him!), he wouldn't survive. The kid's mother remarked that the kid was a huge fan of the Flash and so Jay shows up to tell him a story.  Because kids never fall asleep when you tell them a story while they're laying flat on their backs in a bed.

Which meant that we got a lot of stuff like this: 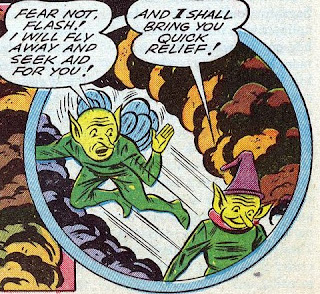 I don't know what kind of "quick relief" he's talking about, but the look on his face is telling me I don't want it.

It didn't get any better, even in a "it's so bad it's good because I can make fun of it on CMNS" kind of way.  As you might expect, the kid regains his sight and realize that Jay and the Flash are one in the same. 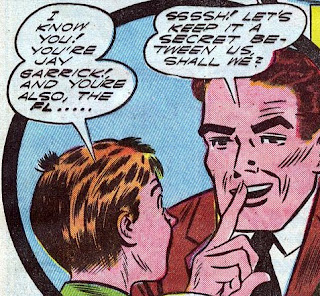 And now that you can see, do I have any boogers?

Okay, I'm better than that.  My point with the panel is that Jay was talking to the kid as the Flash the entire time and isn't quick enough to stop the kid's chatter before he gets out everything but the last syllable?  That room still has the doctor and the kid's mother in there, so I'm pretty sure the cat's out of the proverbial sack.

Here was an ad I saw for the second issue of Wonder Woman: 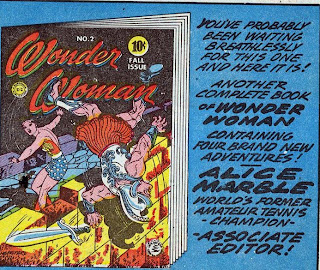 Well, I was going to skip it, but ALICE MARBLE, WORLD'S FORMER AMATEUR TENNIS CHAMPION IS THE ASSOCIATE EDITOR?  Well, put a gun to my head, why don'tcha?  That rocks on so many levels!

Email ThisBlogThis!Share to TwitterShare to FacebookShare to Pinterest
Labels: flash, golden age, small children are so needy whiny and selfish