As I've gone through a few of these issues of Pep Comics you may have noticed that I overlooked the "Kayo Ward" feature.  This is largely because I find comics that aren't about people with superpowers (can I say "superpowers" without getting sued by the Big Two these days?) are dreadfully dull.  But this particular installment from Pep #3 caught my eye: 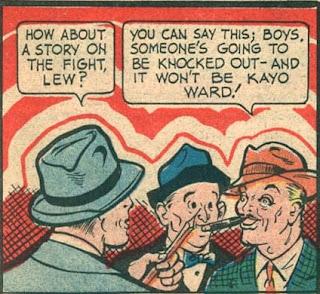 It won't be Kayo Ward!  And as you can tell by my demeanor, I LOVE COCAINE!!!! 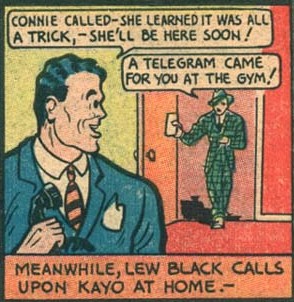 Okay, the logic of this kind of threw me off.  Kayo gets a telegram, right?  This is what it says: 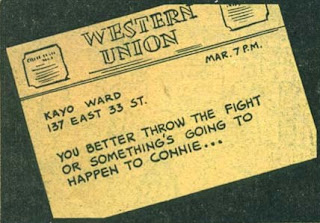 Now, I recognize that the Western Union guy probably doesn't pay much attention to the messages he's given all day long, but wouldn't that one kind of leap out at you as you're wiring it?  It's not like the message is so cryptic that even the most careless reader can't glean what the sender is driving at.  Those people at Western Union must be some stone cold-hearted dudes is all I'm saying.

But this panel sold me: 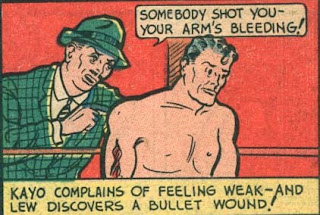 THAT is a man who is not in touch with his body's signals.  I sure am tired.  It must be all the Red Bull I've been drinking.  Or maybe the bullet wound is keeping me from getting a good night's sleep... nah, probably the Red Bull.

That's some good stuff right there.

Email ThisBlogThis!Share to TwitterShare to FacebookShare to Pinterest
Labels: does this look infected to you, kayo ward, the world belongs to people who pay attention