Some of you folks may have noticed that I was pretty quiet about politics this election season.  Well, that was deliberate, not because there's anything wrong with talking about politics, but because I just didn't want to exert the energy into all the flaming.  But now that it's over, I will tell you that this country dodged a bullet recently.

No, not Romney.  The proposed Wonder Woman television show:

I forget who the actress is, but she was way to skinny to be an amazon.  She would be a spear-carrier for an amazon at best.

Sorry to get all opinionated on you, but it had to be said.  We as a nation avoided a very dark chapter in history.

Hey!  It's time for the Sergeant Boyle story from Pep Comics #2! 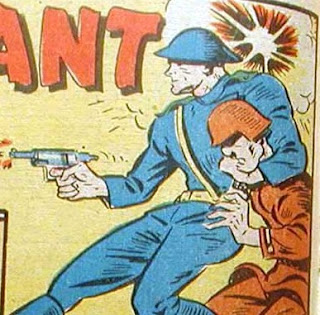 He's had that enemy soldier in a headlock for the past 45 minutes.  He just hasn't gotten around to killing him yet.  That's Sergeant Effin' Boyle!

Hand to hand combat to the death makes him purr like a cat: 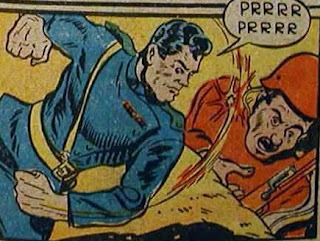 He can dodge bullets!

Wait.... why can he dodge bullets? 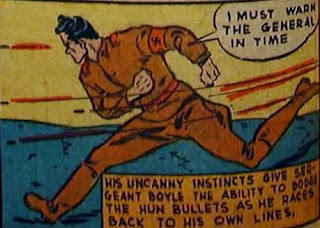 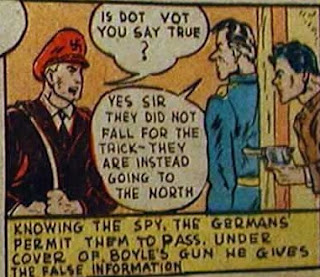 Is that man behind you holding a gun to your back?

Does that in any way affect the credibility of your report?

He'll hop in your foxhole and clean house!

You know it's a serious beating when entire planets come flying out. 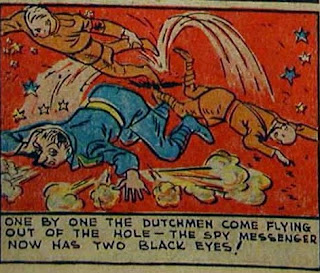 Weren't we fighting Germans?  I'm sure we were.  Why are we picking on the Dutch? 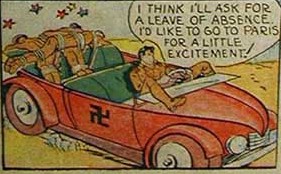 Excitement?  But Sarge, don't you think it was exciting that you...

Technically Wonder Woman wasn't and isn't an Amazon, therefore her size really doesn't matter. As I am sure you remember she was molded out of clay and given life and powers by the gods. So as someone once said "Size matters not." The actress' name is Adrianne Palicki.

I personally would love for there to be a proper live action superhero show on television.
By this I mean NOT like to see any of the following;

a presuperhero identity show (such as Smallville)

a non-powered superhero (such as Arrow or The Cape)

regular people who get powers who have never appeared in any comics previously (such as Heroes, No Ordinary Family, Misfits)

a parody/spoof (such as Batman)

I want a live action show with a superhero that has actual powers. Also I want the superhero to actually fight supervillians, not just regular criminals. Now is that to much to ask?

I think the money is an issue... but yeah, it would be awesome. But give "Arrow" a chance - it's not religiously tied to the source material, but it's a pretty good watch!

I never watch serial shows, first run. I always wait until I can watch a whole season at once. I MIGHT give it a chance laters, but not for awhile.

Just to expand on MarvelX42's comment, Adrianne's previous "super" appearance was as the pseudo-Kara in "Covenant", Season 3 Episode 22 of Smallville (May 2004). She's natually a blonde, but dyed her hair for the Wonder Woman show. She's made other appearances since, but I haven't seen them. Does anyone know if she remained a brunette?