Guest-Starring BATMAN! Note That There Are No Refunds!

Anyone who knows me knows that I am a "Man of the People."  I respect anyone who is working any job, because every job is important in making the world go around.  So, I am often the last person to complain or criticize someone when they're struggling with getting their job done if  they're giving it their all.

That being said, the Queen of Diamonds needs to raise her standards:

How many times is The Rocket... excuse me, SIR Rocket, going to have to duke it out with these guys?  I appreciate their enthusiasm and their desire to protect the Queen, but their cognitive reasoning skills leave a lot to be desired.  Frankly, I'm surprised the Queen has lasted this long.

Hey!  It's a guest appearance by Batman! 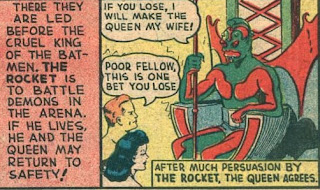 Well.... okay, but he's the KING OF THE BAT-MEN.  That should count for something.

Okay, that was a bit of a disappointment.  The only thing that would make me feel better is a shot of a dead dragon's head being crammed into the mouth of gigantic blue turtle.  And... AND... the turtle should have striped legs. 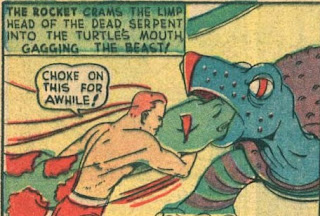 Say what you will about Pep Comics, it has its moments of greatness. 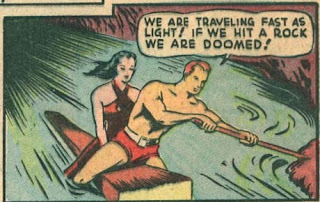 The problem I have with that statement is that there are going to be kids who are as dumb as I was and think that it's possible to go kayaking and travel the speed of light.  And I would insist that it was possible because I "had read it somewhere."

So how do we end such a fanciful epic? 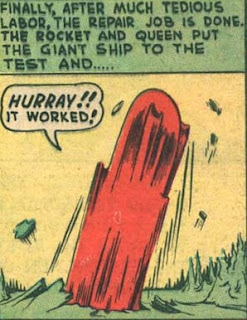 Yeah, just have him repair the ship off-panel and launch 'em.  Of course, he arguably could have done that at the beginning  of the story, but I don't read these things for their gritty realism.

Email ThisBlogThis!Share to TwitterShare to FacebookShare to Pinterest
Labels: good help is hard to find, I could have done this in the beginning but it would have been a very short story, recycled names, red rocket, SIR rocket